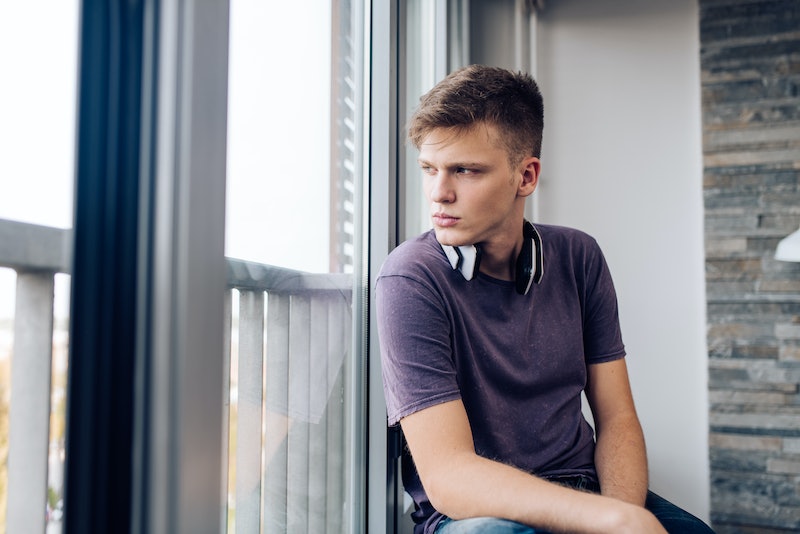 Survived Thanksgiving with your horrendous uncle who makes "women belong in the kitchen" jokes? Wonder why you keep in touch with that sibling who just doesn't understand "why feminism is, like, a thing?" Well, if you want to appeal to anything to convert them to the idea of women's rights (besides logic, empathy, economics, decency, human equality, and other likely-unsuccessful gambits), you can always appeal to their self-interest. Joining an increasing pantheon of science, a new study has discovered that being a misogynist man is genuinely bad for your mental health. Yep: your hideous ex-boyfriend's nightmare views about male superiority are tied to higher incidences of mental illness.

This is in no way surprising to anybody who's been following the discussion of masculinity and its pressures in recent years; the statistic, for instance, that men in the U.S. are four times more likely to attempt suicide than women is a potent reminder that there's something bad in the water for dudes. Patriarchal expectations, it seems, enforce poor outcomes for both men and women; men, according to the World Health Association, have generally better health than women worldwide (which, by itself, is deeply upsetting), but the burdens of carrying patriarchal beliefs clearly run pretty deep.

In case anybody wants to tell you that men ruling women is just the "natural way of things" and "how we've evolved," you can tell them firmly that nearly 80 studies say otherwise, and that they need to give up this misogynist nonsense for the sake of their mental balance. Might not make Christmas any more comfortable, but it may at least help you get through your mashed potatoes in peace.

How Misogyny Can Ruin Mental Health For Men

The numbers involved in this latest collection of studies are impressive. To reach their conclusions, the researchers from Indiana University looked at 78 different studies involving a whopping 19,453 people, many of them U.S.-based men. The researchers were looking for a specific link between a person's beliefs about masculinity and whether their mental health was robust. (And yes, you can quantify masculinity, using the Conformity to Masculine Norms Inventory. Now you know!)

The Inventory itself is a fascinating document: it contains 11 different norms that are seen as the ultimate in patriarchal concepts about masculinity and misogyny. The official terms are "desire to win; need for emotional control; risk-taking; violence; dominance; playboy (sexual promiscuity); self-reliance; primacy of work (importance placed on one's job); power over women; disdain for homosexuality; pursuit of status." It's a combination that everybody who's spent any time with a douche-bro of any description will find extremely familiar. The researchers looked for any link between adhering to bits of the Inventory and poor mental health, and, perhaps unsurprisingly, found that there were some clear relationships to be found between overemphasis on a male role in society (and sh*tty views about women and gays) and general mental suffering.

"Conformity to masculine norms," the study says, "was positively associated with negative mental health as well as inversely related to positive mental health and psychological help seeking. These findings support previous assertions on the deleterious consequences associated with masculinities." They identified various mechanisms for why this might be so: if you place enormous pressure on yourself to be emotionally controlled and self-reliant, the primary breadwinner, and a person of high status, you're very likely to crack. The position of male in modern society isn't natural; it's deeply psychologically harmful.

Interestingly, the meta-analysis done by the researchers found that "three specific dimensions were significantly, robustly, consistently, and unfavorably associated with negative mental health, positive mental health, and psychological help seeking." The three problem areas? Holding beliefs in male self-reliance, the importance of being a playboy, and believing you should have power over women. "Help-seeking," here, is one of the key ways in which misogyny fails men; they're far less likely to get help if they hold attitudes that determine they should be strong, independent, and emotionally stable, worsening problems. The playboy and power beliefs will likely cause those who hold them to "struggle in their relationships with women," which might cause all kinds of havoc. (The idea that this can be serious is borne out by the case of Elliot Rodgers, who opened fire on the public in California in 2014, claiming it was revenge against rejection by women.)

Their findings, the researchers said, highlight "the idea that sexism is not merely a social injustice, but also has deleterious mental health-related consequences for those who embrace such attitudes." In other words, misogyny is genuinely and seriously bad for you — both for those targeted by explicit sexism, and those responsible for putting it out into the world.

This new collection of studies provides a male perspective in a field of study often dominated by female experience. There have been a host of studies done on how sexism impacts female mental health, and the story, unsurprisingly, hasn't been particularly good. According to the evidence, sexual objectification of women, writes NYU's Department Of Applied Psychology, "is both directly and indirectly linked to various mental health distresses and disorders in women, including anxiety, depression, disordered eating, and reduced experiences of flow and productivity."

And a study that came out in 2015 found that fear of rape and a highly-charged sexist environment created the significant risk that American women would experience "psychological distress," which raises the possibility of depression and other mood disorders. Jessica Valenti, writing about the study for The Guardian , summed it up: "Sexism is making women sick."

What we're increasingly discovering, however, is that sexism is making everybody sick. It ruins relationships, creates unsustainable expectations, restricts men from getting the help they need, prompts bullying and targeting of the "feminine," disavows emotional instability as just "being a crazy girl," and is essentially a venomous entity that helps nobody. If it were a literal virus, we'd be actively attempting to find a vaccine and Bill Gates would announce several billion dollars worth of investment in eradicating it. As it isn't, though, let's all at least take note of the fact that it's not just "a lady thing." Putting misogyny and homophobia in the trash can is an everybody thing — and it certainly affects all our health.

More like this
Nicola Coughlan Just Got Real About The Hazards Of "Bridgerton Boob"
By El Hunt
The Viral 'Little Miss' Franchise Is Focusing On Mental Health Next
By Darshita Goyal
Ashton Kutcher Opens Up About His Battle With Rare Autoimmune Disorder
By Radhika Menon
Talking About Mental Health In Sport Is Crucial, Says England Legend Karen Carney
By Sam Ramsden
Get Even More From Bustle — Sign Up For The Newsletter