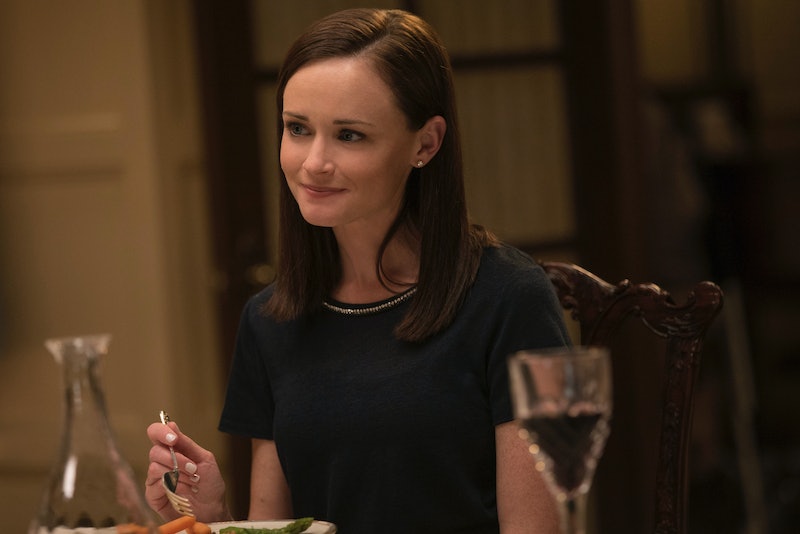 Choosing what boyfriend you wanted Rory to end up with on Gilmore Girls is as personal as who you vote for or what deodorant you use. It’s something that every person has to decide for him or herself. Me? I’m Team Logan. But I have many friends that are Team Jess, and even one or two that are Team Dean (though I don’t know why), and we manage to live happy, healthy lives together. The big question of the Gilmore Girls revival was: who does Rory end up with in the Gilmore Girls revival? Lucky for you, I have your answer. MAJOR GILMORE GIRLS REVIVAL SPOILERS AHEAD. SERIOUSLY, DON'T KEEP READING IF YOU DON'T WANT TO KNOW.

But, before I reveal it, let’s take a short walk down memory lane. Rory started the show dating Dean. Then, there was a very, very short Tristan moment (remember Tristan? Ha.), and then Dean again. Then, Jess came to down and blew everything to crap, because what teenage girl could resist a brooding bad boy? Not me, that’s for sure. After Jess and Rory broke up, Dean popped in for a millisecond (long enough for Rory for drop her v-card), but it wasn’t long before Logan came into her life and stayed there through nearly the end of Season 7.

Logan and Rory broke up toward the end of the series because he proposed, completely out of the blue, and she wasn’t ready to get married. I side with Rory on this one — Rory and Logan were never seen discussing marriage, and I think it’s bizarre to just pop the question to someone when you’ve never said the word “marriage” to them before. Newly single, Rory graduated, only to find herself with a new man — Barack Obama. Rory nabbed a job working on his campaign bus. I always think that she chose herself at the end of Gilmore Girls, but whom did she choose on Gilmore Girls: A Year In The Life? (Don’t worry — it’s not Paul, her new boyfriend who we see once.)

Well, this is where things get complicated. Rory and Logan had a friends-with-benefits relationship through the revival, even though she had a boyfriend and he was engaged. Not great. Every time she was in London, she would stay there, and they would pretend they were a couple on that continent and not when she was in the States. Eventually, though, Rory and Logan broke their arrangement off, but not after one last night together in a bed-and-breakfast in New Hampshire.

And what of Dean and Jess? Rory and Dean saw each other in Doose’s Market, and he has a mess of kids and a wife and lives in Scranton. They had a nice moment, but Dean and Rory are not getting together. Jess, though? Jess gave Rory a lovely pep talk or seven over the course of the revival, and there was definitely a look that said, “I’m not over her” as he gazed at Rory longingly through a window.

But that’s not it either! Rory ended up with… herself. Oh, and the unborn child she has growing inside of her. Yep, that’s right — Rory Gilmore is pregnant, presumably with Logan’s baby from their last tryst. The show has always been about the mother/daughter relationship, so it does make sense to me (although it is shocking) that Rory would begin to forge her own mother/daughter relationship. As Christopher told Rory, the bond between Lorelai and Rory was always unbreakable, and now Rory will hopefully have the same thing.