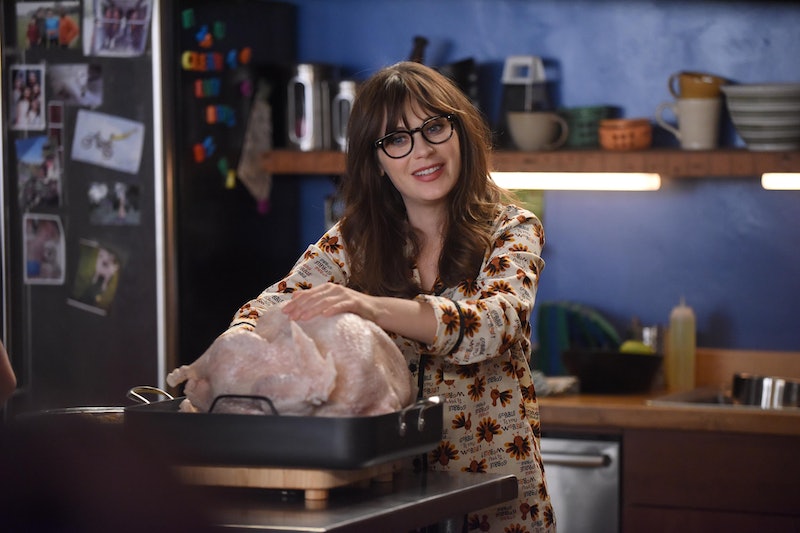 As a longtime, die-hard Nick and Jess shipper when it comes to New Girl, I've always rooted for those crazy kids to get back together and, as a result, have never been that big of a fan of any of the guys Jess has dated since they broke up. But now? That might all be about to change, because I'm starting to actually kind of like Robby and Jess together. In the Nov. 15 episode, Jess was trying to figure out the best way to dump him without hurting his feelings, and that continues this week, too... until she surprisingly changed her mind. Jess realizes she actually has chemistry with Robby on New Girl 's Thanksgiving episode, and I'm pretty excited to see where this relationship goes.

Since Robby's injury at the gym, he and Jess have spent all their time together, but even so, she's still not feeling "the oomph," which I totally get. Someone can be so right for you on paper but if there's no oomph, it's not going to work. But when he ends up at Jess' Thanksgiving dinner after there's no room for his broken leg on his flight home for the holidays, she finally gets the push she needs to realize that Robby could actually be the right guy for her.

After Jess finally breaks up with Robby, he finds out that Schmidt's dad (who's in town for the turkey) tried to hook up with Jess again, even after Nick and Schmidt found out he's been dating multiple women at the same time. Robby stands up for her and lists all the things he loves about her, and that's what finally makes Jess find that oomph. It was such a sweet moment if only because Robby still had such sweet things to say about Jess, even though they were already over. But then, they decide to give it another shot, and it seems like it could actually work out this time.

It's hard to imagine Jess with anyone but Nick, but Robby may be in a solid second place in my heart. He clearly cares about her, and they can be dorks together, which is actually kind of adorable. If Nick and Jess are meant to be, they'll find their way back to each other eventually. But in the meantime, I'm loving this new pairing.