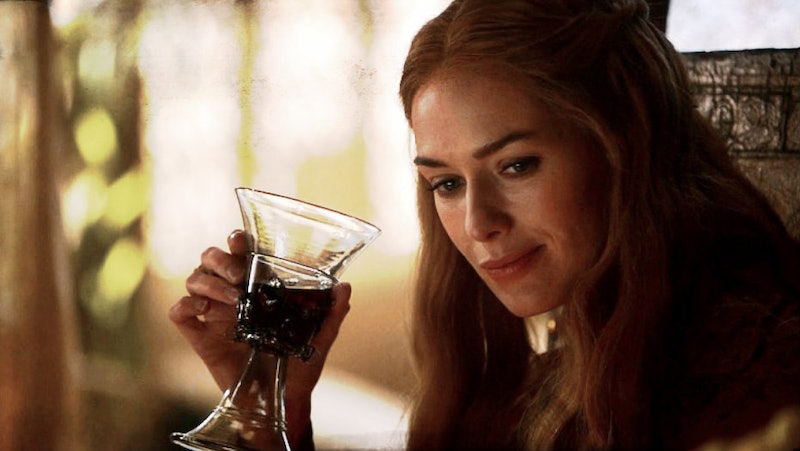 Just in time for Season 7, Game of Thrones wines are coming to a store near you. A partnership between California's Vintage Wine Estates and HBO will bring Seven Kingdoms Wines to your favorite beverage store next spring, so that you can drink your way through everything the penultimate season of Game of Thrones has to offer.

The pairing of Game of Thrones and wine comes as no surprise. Over the course of six seasons, viewers latched onto the hard-drinking Cersei and Tyrion Lannister. Neither the Queen of the Seven Kingdoms, nor her younger brother, have a healthy relationship with alcohol, but the former Hand of the King views wine as a crucial part of his identity. "That's what I do," he tells Missandei when they finally meet in Season 6, "I drink, and I know things."

Even without the show's internal wine culture, releasing Game of Thrones wines makes sense when you consider who is watching and drinking. Women make up a sizeable chunk of the Game of Thrones audience, in spite of the gender-based violence that pervaded its early seasons, and young women are the largest wine-drinking demographic in the U.S. In light of those facts, not having Game of Thrones wines available seems like a bad idea.

HBO's collaboration with Vintage Wine Estates isn't the first time an idea for Game of Thrones wines has bubbled to the surface. Back in 2014, Common Ventures crowdfunded the Wines of Westeros project with pre-orders for a 12-varietal series. In April, ilikethisgrape.com reported that the label had "reached such unprecedented levels that their site and product are currently being renovated to better suit the demand of ... enthusiasts," but, with a website that's still removed from the Internet, it's unclear what exactly became of that business.