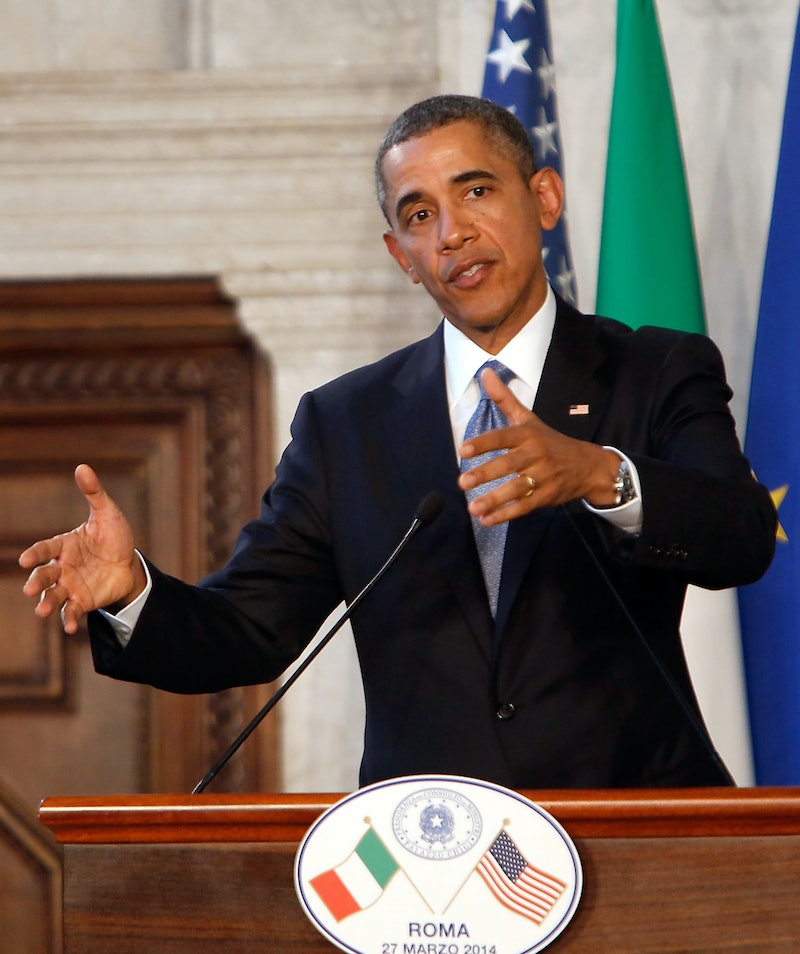 So you’re at a party, and someone says something ignorant. And while you know that they’re in the wrong, and that you could totally engage them and win if you were a bit more prepared, your words escape you. To make sure that doesn’t happen, we’ve compiled a series of handy reference guides with the most common arguments — and your counter-arguments — for all of the hot-button issues of the day. This week’s topic: How to argue for obamacare .

Common Argument #1: The government can’t force people to buy a product on the private market. That’s unconstitutional. Don’t tread on me!

Your Response: Well, you’re going to end up paying no matter what, because without an individual mandate, taxpayers cover the cost of uninsured peoples’ visits to the ER. So it’s a matter of whether you pay now or whether you pay at the end of the year.

But from a philosophical and legal standpoint, the individual mandate is perfectly constitutional, because, as the Supreme Court ruled two years ago, it’s a tax. The government charges a small financial penalty to people who don’t have health insurance (unless they’re below a certain income). Another way of looking at this is to say there’s a “health insurance” tax everyone has to pay, but from which people are exempt if they purchase individual health care plans. This is done all the time in the U.S. tax code — it’s called a tax write-off, and it’s perfectly constitutional.

The Obama administration didn’t refer to the mandate as a tax for political reasons (it’s unpopular to call something a tax), so if you want to accuse Obama of misleading people about that, go right ahead. But the mechanism itself functions as a tax.

Common Argument #2: President Obama and the Democrats shoved this through Congress and crammed it down the American people's throats.

Your Response: The bill passed with a supermajority in the Senate and a majority in the House of Representatives (twice). It was then signed by a democratically-elected president and upheld by the Supreme Court. You can debate the quality of the bill, but you can't seriously argue that it wasn't and enacted through Democratic norms.

Your Response: Sure. But polls also show that a majority of people don't want to repeal it, so...

Common Argument #4: This is a Socialist takeover of health care.

Your Response: Actually, if anything, the ACA solidifies the private sector’s control of health insurance. The centerpiece of the law is a requirement that everybody buy health insurance on the private market. That whole idea, the individual mandate, is based on a Republican policy. It was dreamed up by the conservative Heritage Foundation in 1989 (here’s the original proposal), championed by Republican Senators, and enacted into law by noted Republican Mitt Romney in Massachusetts. The GOP loved the individual mandate before it had Obama’s name on it.

For a nice illustration of this, look at Senator Chuck Grassley, who supported the individual mandate when it was proposed by Republicans in the 1990s, then called it “unconstitutional” once Obama proposed it.

Liberals, on the other hand, were so outraged at the right-wing nature of the law that a ton of them opposed it before it became law. Howard Dean, from the socialist oasis of Vermont, called the bill “a bigger bailout for the insurance industry than AIG” and encouraged progressives to kill the bill before it passed. The most liberal part of the bill was the so-called “public option,” which would have been a government-run insurance plan. But then-Senator Joe Lieberman refused to vote for that idea, as it was too liberal for him, and it was dropped from the bill.

Common Argument #5: Obama said people can keep their plans if they liked them, but millions of people received cancellation letters!

Your Response: Yes, Obama definitely messed up on the phrasing on that one. But here's the truth: the Affordable Care Act set minimum requirements for health insurance policies — for example, maternity leave — but it also grandfathered in plans that didn’t meet these qualifications. That’s where the “If you like your plan, you can keep it” promise came from. But if an insurance company modifies one of those plans, and it still doesn't meet the minimum coverage requirements, then the plan isn't grandfathered in anymore. Because it's not the same plan.

Those policies were the ones that got canceled, because they were dangerously inadequate policies. Around half of the roughly 2.4 million people who had their (terrible) policies canceled will be eligible for subsidies via the federal exchange, many will pay less than they did before, and all will have better health coverage.

Common Argument #6: Well, there have been more canceled policies than new enrollments, so the law has resulted in fewer people insured than before.

Common Argument #7: Obamacare is a job-killer. Didn’t you see that report that it would cut 2.3 million jobs?

Your Response: To paraphrase The Princess Bride, I don’t think that report means what you think it means.

Most Americans receive health care from their employers, and people often stay at jobs they don’t like in order to keep getting health coverage. Because of the subsidies in the Affordable Care Act, a lot of people won’t have to do this anymore. The Congressional Budget Office wanted to determine how many people would voluntarily reduce their hours at work because they no longer needed the health insurance that their job offered to full-time employees. Their answer was 2.3 million.

These people aren’t being fired. They’re not being downsized, or forced to work less. They’re deciding to work less because it’s within their financial interest to do so. Tell me why that’s a bad thing.