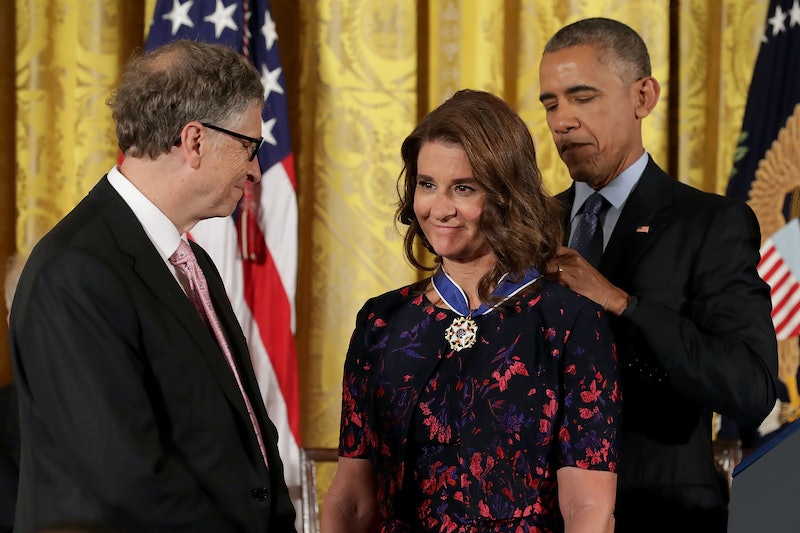 Each year, the president gets to show his appreciation to residents of the United States with the highest civilian honor: the Presidential Medal of Freedom. In selecting his recipients, the nation's leader gets to pick those who represent the values of his administration, and show gratitude to those who have made positive contributions to the country and to the world. It's a tradition that dates back roughly to President Harry Truman, but you may be wondering how many women have the presidential medal of honor?

In the eight years of his presidency, 41 women have received the honor from President Barack Obama, according to The Washington Post, which has compiled a database of Obama's choices. Obama has given more Medals of Freedom to women than any other previous president, according to the data. The president has given out the most awards thus far in the Medal's history, at least 114. (The paper said it counts an award given to two people as one single award.) Behind him are Ronald Reagan and Bill Clinton with 86 each.

Since President Bill Clinton gave out his first Medal of Freedom in 1993, 288 awards have been presented. Out of those, 71 have gone to women. While it's certainly not an equal split between men and women, President Obama has done the most to even the gender gap. WaPo estimated that 36.3 percent of his picks are women. Obama has also given 44 Medals to nonwhite recipients, more than any other president. Notably, Obama's 2016 choices include several actors, artists, and musicians.

According to The New York Times, President John F. Kennedy established the award in 1963 to honor those who have made contributions of national interest, world peace, or cultural endeavors to be given out annually.

At the end of such a high-tension year, there's sure to be some relief found in celebrating and honoring those who are positively contributing to our country. President Obama's honorees show a diverse group of individuals who together have helped move our country forward.