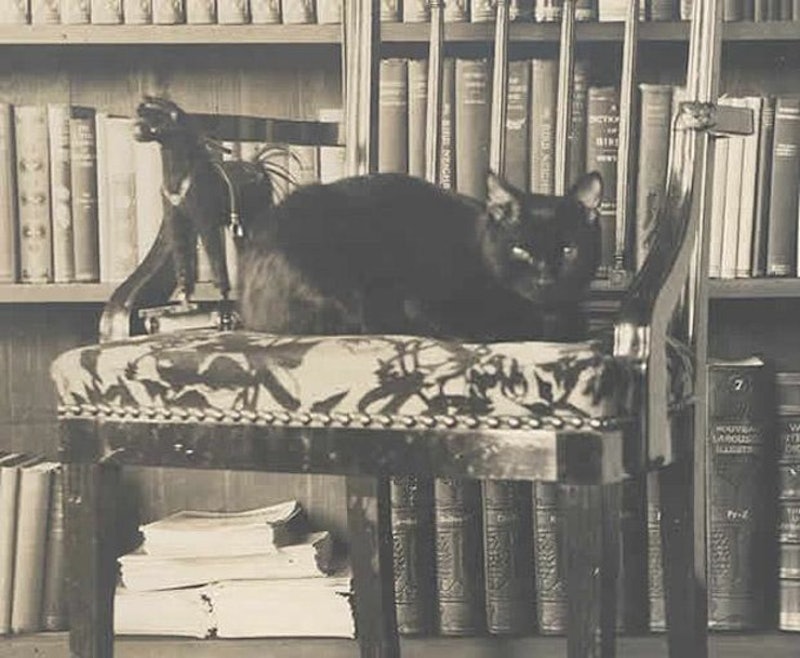 There's nothing better than settling down with a good book, all curled up in your favorite chair with your beloved cat. Or dog. Or chicken. Whatever your species of choice, there's a reason that most dedicated readers and writers love pets. Maybe they want a companion for their long, solitary work. Maybe they want someone cuddly, who won't easily bore of their endless ruminating on adverb choice. Either way, many famous writers were devoted to their furry or feathered friends. Here are just a few of those lucky pets and their famous author people.

Now, this is by no means an exhaustive list. Some rudimentary googling will show that nearly every author who ever lived owned at least one cat, or perhaps a dog (this a non-partisan pet list, so you can keep your cat vs dog sentiments at home). And all of them love their pets. Jack Kerouac, for example, was so distraught when his cat Tyke died that he went on a month-long bender. Dorothy Parker said of her dog Misty, "Why, that dog is practically a Phi Beta Kappa. She can sit up and beg, and she can give her paw—I don't say she will but she can."

So here are some of the other spoiled animals who kept your favorite authors company:

Charles Dickens was an animal person. He kept cats, dogs, a canary, a pony, an eagle, and several successive ravens named Grip. The first Grip learned to mimic speech, and Dickens lovingly recorded the bird's vocabulary. He loved Grip so much, in fact, that when the bird died he had him stuffed, as well as writing him into the novel Barnaby Rudge. A young writer named Edger Allan Poe met Dickens and Grip in their travels, and most Poe scholars believe that reading about the fictional Grip inspired him to write about ravens, too.

Mark Twain adored his cat, Bambino. When Bambino got lost one day, Twain took out an ad in the New York American, offering $5 for his safe return with the description: "Large and intensely black; thick, velvety fur; has a faint fringe of white hair across his chest; not easy to find in ordinary light." Luckily, Bambino turned up in a neighbor's yard and was brought home, but for days afterwards Mark Twain fans kept showing up with strange cats, claiming they'd found him.

Author and essayist Flannery O'Connor collected peacocks. On her farm in Georgia she raised over a hundred peafowl, who were featured in a few of her essays as the "Kings of the Birds." In addition to peacocks, she kept ducks, emus, ostrich, and possibly even toucans.

Virginia Woolf loved cocker spaniels, and her beloved dog Pinka was often by her side. She also wrote Flush: A Biography, a half-fictional account of poet Elizabeth Barrett Browning's cocker spaniel, which was named "Flush" for some unknowable reason.

For all his macho nonsense, Ernest Hemingway was 100% a stereotypical old cat lady. He started off with one six-toed kitten named Snow White, an adorable gift from a sea captain. Soon after, he began to adopt more cats, leading to more and more six-toed kittens. If you visit his home-turned-museum in Key West, Florida today, you can still find forty to fifty six-toed cats living there, the descents of his original kitty.

Eccentric poet Lord Byron loved his pets, but he loved being petty even more. In the early 1800s, he tried to bring his dog with him to study at Trinity College, but was told that dogs weren't allowed on campus. So he brought a bear instead. As he wrote to a friend in 1807: “I have got a new friend, the finest in the world, a tame bear. When I brought him here, they asked me what to do with him, and my reply was, ‘he should sit for a fellowship’.”

Gertrude Stein and her partner Alice B. Toklas had an affinity for white poodles, who were always named Basket. The current Basket would be bathed in sulfur water each day, and then Stein would make her guests run the dog in circles in the yard until he was dry.

You probably know that John Steinbeck loved his poodle Charley, because Travels with Charley is all about him and Charley going on a road trip. But his setter Toby deserves a special shout out too, because Toby ate the first draft of Of Mice and Men, meaning that Steinbeck had to start over from scratch: "Minor tragedy stalked. I don’t know whether I told you. My setter pup, left alone one night, made confetti of about half of my [manuscript] book. Two months work to do over again. It sets me back. There was no other draft. I was pretty mad but the poor little fellow may have been acting critically."