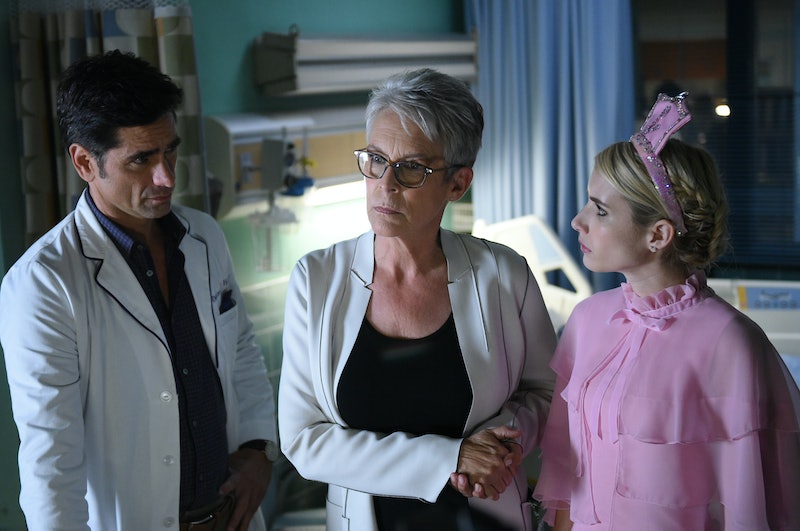 Remember when we were all stunned to learn there were two Red Devils on Season 1 of Scream Queens? Well, it looks like history is repeating itself at the C.U.R.E. Institute because on the Nov. 22 episode "Blood Drive" we found out that (you guessed it!), there are two Green Meanies on Scream Queens. But, wait — there's more! Dr. Cassidy, who has been unmasked as one of the season's villains, doesn't know the identity of the other person who's roaming the halls of C.U.R.E. in that creepy costume. And, to make things even more confusing, he eagerly handed over an additional mask to Ingrid (Kirstie Alley).

So, when Scream Queens returns next week, there will be not one but three Green Meanies inside the C.U.R.E. Institute. Yikes. Pretty soon, the Chanels will be longing for the simpler days at Wallace University when they were being stalked by Red Devils who at least were on the same page and had similar motives. Not to be judgmental or anything, but the Green Meanie murders don't exactly seem like a model coordinated effort. I mean, shouldn't Cassidy be remotely concerned that there's another murderer within the very same building? Where are all these masks and costumes coming from? I have so many questions.

It was also revealed that Ingrid (who hasn't killed anyone yet) is the sister of the late Mrs. Bean, so at least a few motives have been made clear. But, who is the third Green Meanie and why is he or she on a killing spree? If Denise Hemphill were here, she'd immediately tell us that we need look no further than Zayday Williams. And, right now, I'm clamoring to find out the identity of the third villain because he or she may very well be responsible for Denise's death — and I will never forgive the person who killed Special Agent Denise Hemphill.