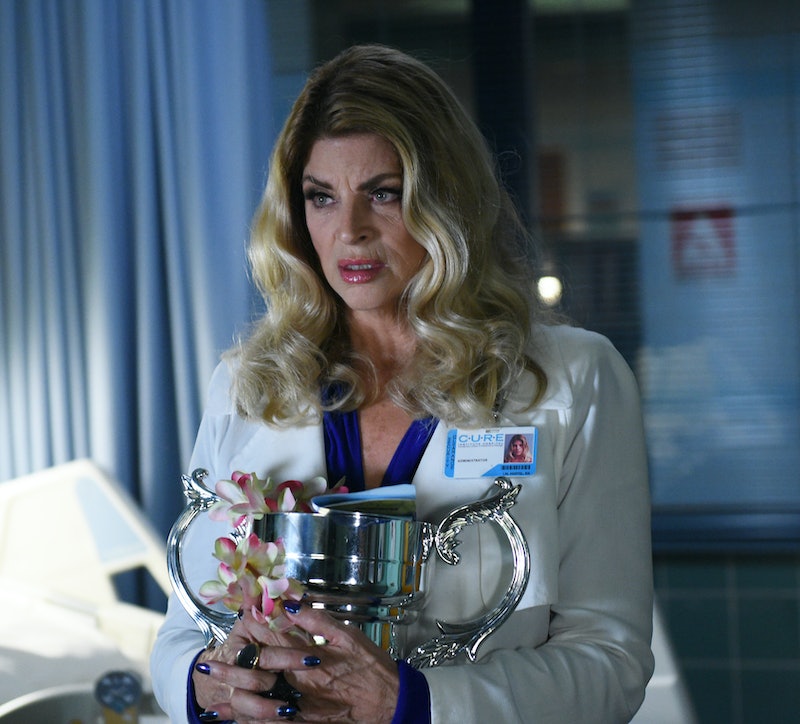 In a voiceover, Nurse Ingrid Hoffel explained that she didn't take a job at the C.U.R.E. Institute just to spend her days surrounded by hot doctors. Nope, she had an ulterior motive. My response to that was, "tell me something I don't know" — and she did. As it turns out, Ingrid is Agatha Bean's sister on Scream Queens and it's suddenly become abundantly clear why she has a major axe to grind with the Chanels. As a refresher, Mrs. Bean was the maid at the Kappa Kappa Tau house in Season 1 and her life came to a seriously gruesome end when Chanel shoved her face into grease and then hid her body in a meat locker.

At the end of the episode, Ingrid teamed up with Cassidy (who was unmasked as one of two Green Meanies) and acquired her very own costume and mask. (Yes, this means that we now need to keep track of not one but three Green Meanies who will roam the halls of C.U.R.E.) But, despite her new alliance with Dr. Cassidy, I don't think we should jump the gun and assume that her endgame is to systematically kill off the Chanels. Ingrid states that she wants revenge, and she may prefer to make their lives hell rather than murder them.

So, what's her plan? Well, it's been clear from the start that any enemy of the Chanels is a friend of Nurse Hoffel's. Although I certainly wouldn't put it past her to commit a murder or two if neccessary, I think she'd prefer to engage in psychological warfare with them — and let's be honest, that's way more fun to watch, anyway. Plus, she'll have a powerful ally in Dean Munsch, who also seems far more interested in making the Chanels lives miserable than killing them.

If I were one of the Chanels, I'd really be wishing that I was back at the Palmer Institute right now.