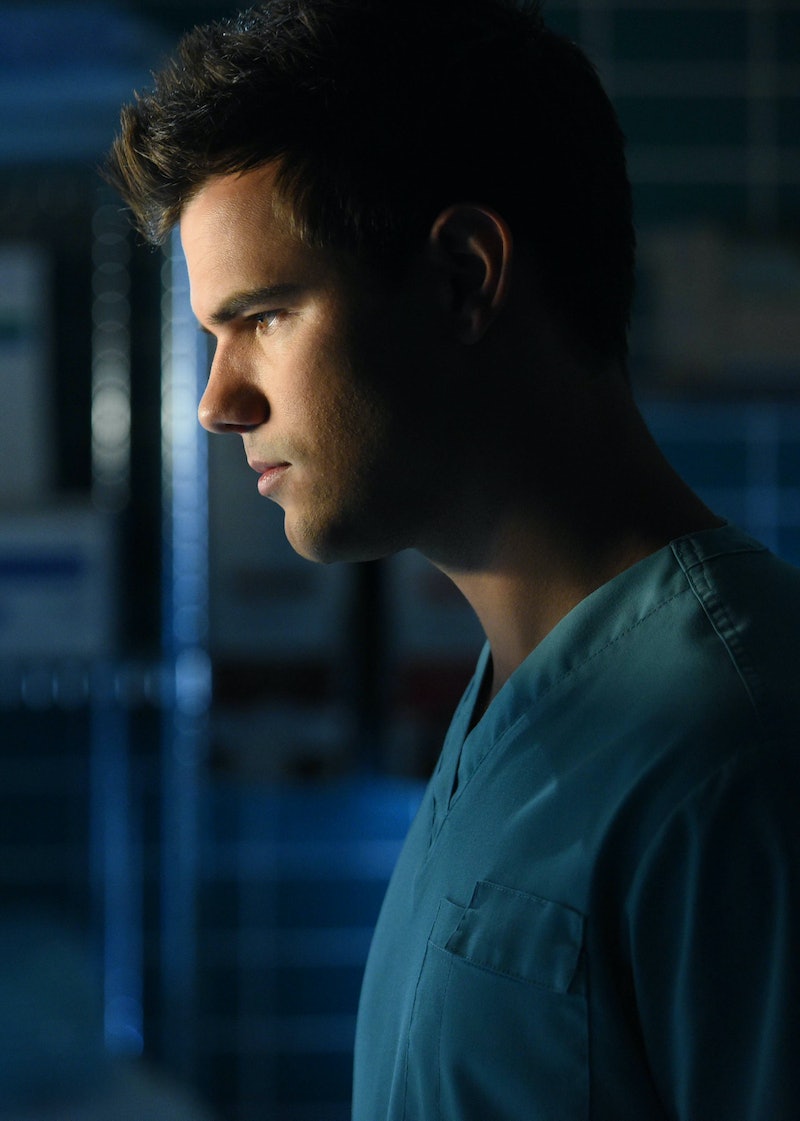 It had been a while since Scream Queens has thrown a legitimate twist at fans, but that all changed with the Nov. 15 episode. The final moments of the episode, "Chanel Pour Homme-icide," delivered a supremely jaw-dropping moment in its final moments of the episode, so spoiler alert if you haven't watched the episode yet. After weeks of speculation, it was revealed that Taylor Lautner's character, Dr. Cascade, was the unborn baby from the Scream Queens Season 2 premiere's opening flashback.

If you remember, the first episode opened on a flashback to the '80s. We were taken to the CURE institute when it was Our Lady Of Perpetual Suffering. The staff of the hospital was deeply entrenched in a Halloween party and a doctor (dressed as the Green Meanie) and a nurse end up throwing a pregnant woman's dying husband into the swamp outside so that they wouldn't miss any of the festivities. Aren't you glad you didn't go to that hospital for your last emergency?

Since that first episode, Scream Queens characters and fans alike have been speculating about who that baby was. After all, they could hold the key to the identity of the Green Meanie. They could even be the killer themselves. Well, Zayday and Chanel #5 were on the right track because they happened to ask the right widow some questions about that night. She initially denied any knowledge of the baby or the man thrown in the swamp, but the last scene proved that she was not being entirely truthful. Dr. Cascade walked into her house and called her mom, then reassured her that he would take care of any one asking too many questions.

This means that Dr. Cascade could easily be the Green Meanie. That baby would certainly have a vendetta against the hospital and doctors who killed their father, and there's no better way to get close to it all then to actually work there. However, considering that we're only about halfway through Scream Queens Season 2, he may be too obvious of a suspect too soon.

More like this
Everything To Remember From 'Stranger Things 3' Before Watching The New Season
By Gretchen Smail
What Makes A Sally Rooney Sex Scene So Hot?
By Samantha Leach
The New Monster In 'Stranger Things 4' Might Be The Creepiest One Yet
By Gretchen Smail
The Grey's Anatomy Season 18 Finale Finally Revealed If Japril Got Back Together
By Brad Witter
Get Even More From Bustle — Sign Up For The Newsletter