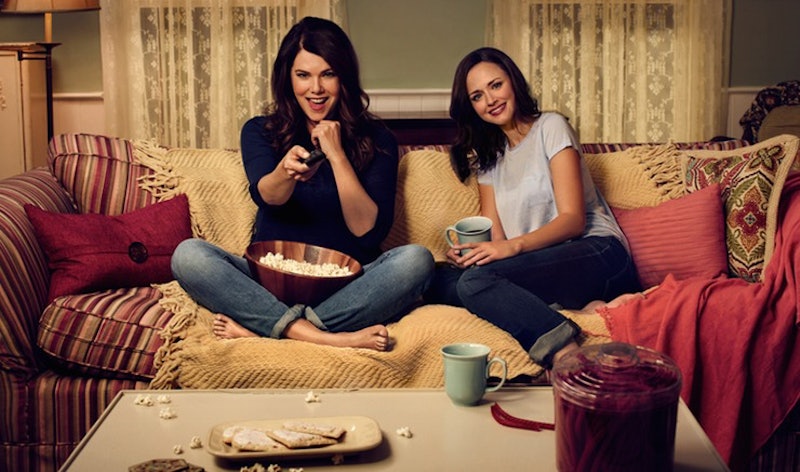 As everyone knows, there is a super important national holiday this week — at long last, the Gilmore Girls revival comes to Netflix on Nov. 25. Oh, and I'm told Thanksgiving is on Thursday, but let's be honest — all the turkey and apple pie in the world can't compare to the momentous occasion of the Gilmore's return to our small screens. Because I have my priorities in order, I'll spend Thursday on an airplane so I can meet up with my mom several hours before A Year In The Life begins streaming — and we'll eat Chinese food and pop tarts, because who needs Thanksgiving when you can spend six straight hours watching Gilmore Girls? But, all good things come to an end and tragically, there are only four 90-minute episodes to watch. So, let's have a game plan for when we finish A Year In The Life because there are other great shows to watch on Netflix after the Gilmore Girls revival.

I'm already dreading that awful moment when the final four words are uttered and it's time to say goodbye to Stars Hollow — and, of course, devotees know that Gilmore Girls is truly one of a kind. But, a number of family-focused shows are currently streaming on Netflix and it's definitely worth giving them a watch (or a re-watch). These seven shows depict a wide variety of families with different dynamics, structures, struggles, and lifestyles — and they'll at least put a band-aid on the gaping holes in our hearts once Gilmore Girls is over.

The natural next step after Gilmore Girls is to spend some time with the Braverman clan — and not just because we can't get enough of Lauren Graham. By following the four adult Braverman children and their families (along with the grandparents, of course), Parenthood depicts a wide variety of family relationships and it's easy to grow attached to these relatable characters.

Even if you couldn't care less about football (*raises my hand*), Friday Night Lights has a lot to offer aside from touchdowns, and the Taylor family is refreshingly realistic. Tami and Julie definitely have a very different dynamic than Lorelai and Rory, but there are plenty of mother-daughter moments that will give you all the feels.

The LGBT community is underrepresented in the TV landscape, but The Fosters breaks the mold in an important way by depicting a family lead by a lesbian couple with five children. Although it's technically considered a teen show, the adults and kids get equal screentime, so this is a great show to watch with your mom.

If you love a seriously alternative family, look no further than The Riches — an FX series that was cancelled way too soon. (I'm still bitter about it eight years later, but that's neither here nor there.) When a family of con artists happens to get into a fatal car crash with a wealthy couple, they adopt their identities and move into an affluent community in Baton Rouge. The Riches will keep you on the edge of your seat, but it's also a reminder that, when it comes to family relationships, we have common ground with people whose lifestyles couldn't possibly be more different from our own.

It's impossible to imagine what it would feel like for a teenager to realize that he or she was accidentally switched at birth — but it's not unheard of, and the subject matter is handled beautifully on this Freeform series. An added bonus is that one of the leads is a deaf character and full scenes are shot in American Sign Language, something rarely seen on TV.

Toni Collette stars as a suburban housewife dealing with dissociative identity disorder in this critically-acclaimed Showtime series. Although it's a comedy-drama with plenty of humor, it handles the subject matter with the sensitivity it deserves, and sends an important message about families supporting one another and sticking together even when a serious illness can make everyday life tough.

I'll admit that The Wonder Years feels a little dated compared to the other shows on this list, but that's part of its appeal — and it's an ideal show to share with your mom if you're home for the holiday weekend. If you love 1960s nostalgia, then I'd totally recommend watching it from start to finish — this classic TV series is one for the ages.

So, don't despair when the final four words are uttered and your TV screen fades to black — Netflix has got us covered.