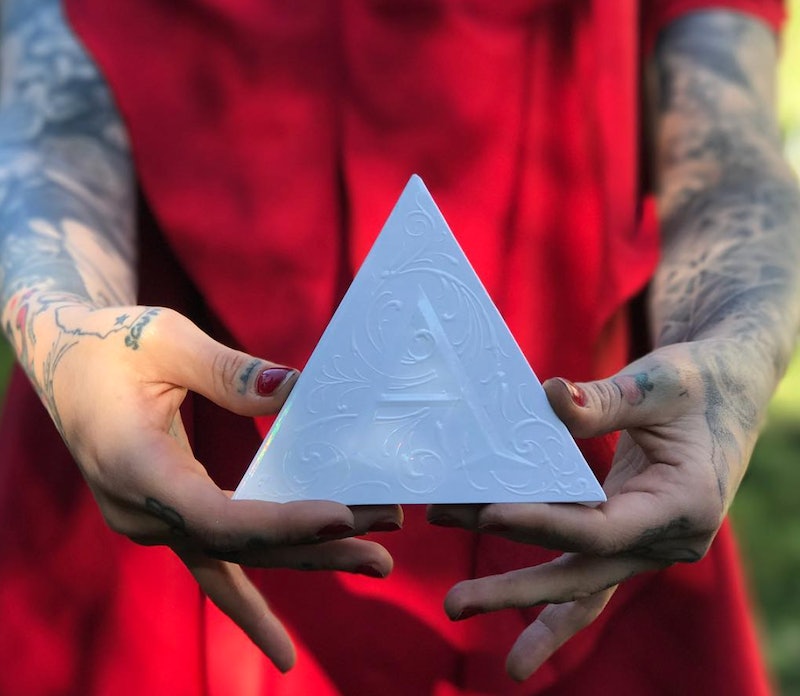 It's time for makeup magic. The formerly shrouded-in-mystery Kat Von D triangular Alchemist palette is almost here. It's a unique product, because it does so many things and its packaging is so gorgeous you will want to hold onto it long after you've hit pan on the products contained within. KVD has been working on the Alchemist palette for seven years, a fact she proudly shared in her revelatory social posts focusing on this product, which stands out due to the iridescent, triangular case. It's quite a change of pace for the brand, which usually rocks matte black packaging. Where can you buy the Kat Von D Alchemist Holographic Palette and when?

The Alchemist Palette drops at via Sephora in December. Here is the specific breakdown of on-sale dates and details. The palette will be available for Sephora VIB members as of Dec. 18. It will next be available for purchase online at the Sephora site and the KVD Beauty site on Dec. 24. KVD Alchemist lands at Sephora stores on Dec. 26.

As for what's inside? There are four pans of powder. Kat described Alchemist's insides as "the most versatile formula I have ever created." It's a highly pigmented and iridescent formula. It was initially designed to be an eyeshadow.

But it has other purposes — it can be used as a highlighter or as a top coat layered over eyeshadow or lipstick.

When applied over other makeup, the Alchemist powder acts as a transformer that changes how it looks. It's makeup wizardry.

Mark your calendar for late December, since that when the Alchemist Palette become widely available to Kat Von D-evotees and makeup mavens that want to play with a transformative product.