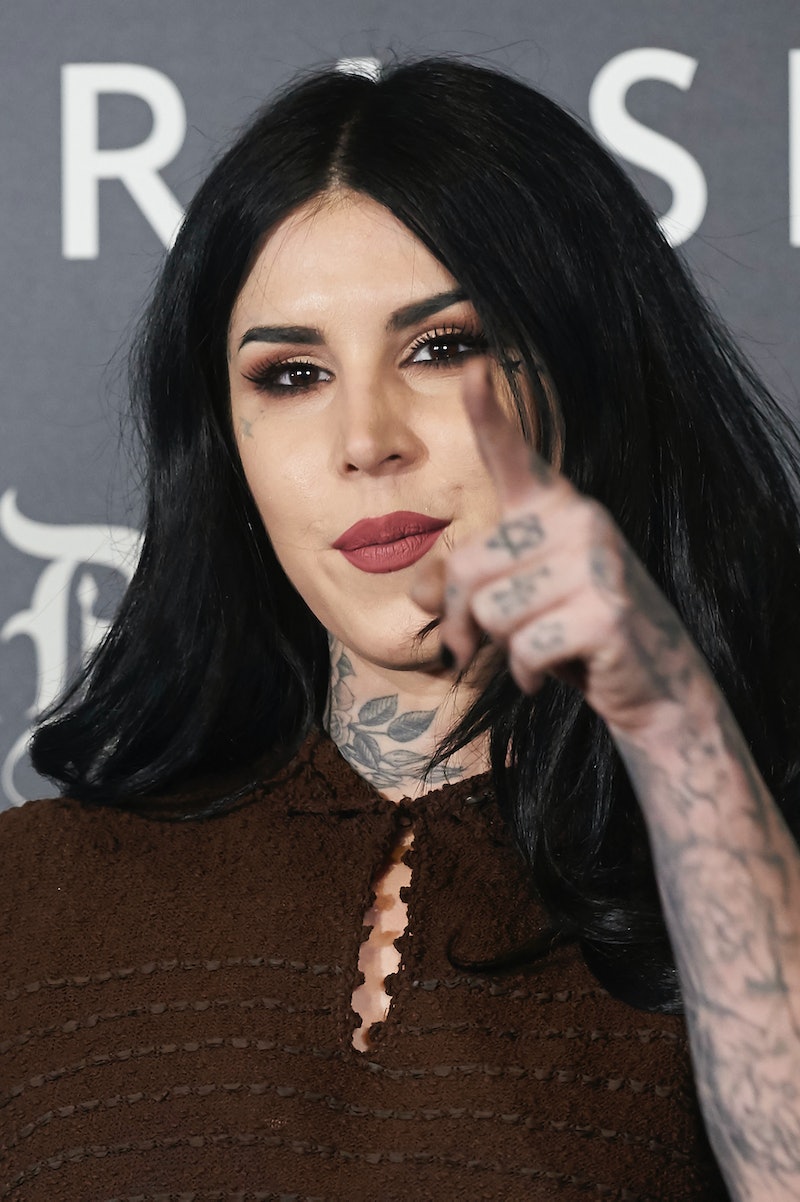 She hasn't even officially released the Serpentina palette yet — it's coming to the Sephora site on July 5 — but she's already planning more #ByeMoney moments for fans. Tattooist and makeup maven Kat Von D teased her triangle-shaped Alchemist palette on Instagram and it was a total "OMG!" scenario. Von D didn't share any details about what is in the palette; in fact, she pretty much told us not to bother guessing because we'll probably be wrong. She also claimed she spent seven (!!!) years working on the formula. That means she has something special up her tattooed sleeve.

So what "type" is Kat Von D's Alchemist palette? Eyeshadows, since she has done plenty of those and to great success? Highlighters? Contouring? Lipstick? There are so many options, but the unusual shape of the palette makes you wonder what the layout and real estate is like inside.

We don't know and Von D wasn't giving up any hints. We are left to speculate and some Kat Von D-evotees did just that in the comments.

Witness the majesty of the triangle palette. This is just a prototype, so it could go through many changes and transformations and look totally different when it lands on shelves.

Wow. Just wow. That just gave me all the feels. I am excited, anxious, and curious all at once.

Von D also revealed that Alchemist is not coming until next year. So our wallets have a minute to replenish themselves before we empty them again on another KVDB item.

The "A" on the front is pretty boss, too.

In the caption of its post, beauty scooper Trendmood suggested it could be eyeshadows and pointed to a previous post in which Kat Von D teased swatches and a new formula way back in 2015. So that's a possibility. Their post breaks down the clues and possibilities, as well.

Amid the anticipatory comments, one fan thought it might be highlighters. Another doesn't even care and will show up for the packaging alone.

More emoji-filled speculation! There is plenty more chatter about the Alchemist palette over at Reddit.

I realize that the "A" is for Alchemist, but it could also be for Amy, so I'd buy it on principle.

Also, alchemy is the process of transforming something in a mysterious way. It was also once a way to turn metal into gold. Maybe it will be something golden, like a highlighter that will light up your face? Maybe it will be shimmery shadows that somehow transform when reflecting light? All gold shades? The fact that it's been a long-gestating formula makes me think it will be some sort of multi-dimensional, breakthrough product.

Notice Kat herself called it a "palette" in the caption, which makes me wonder if it's one product, not several.