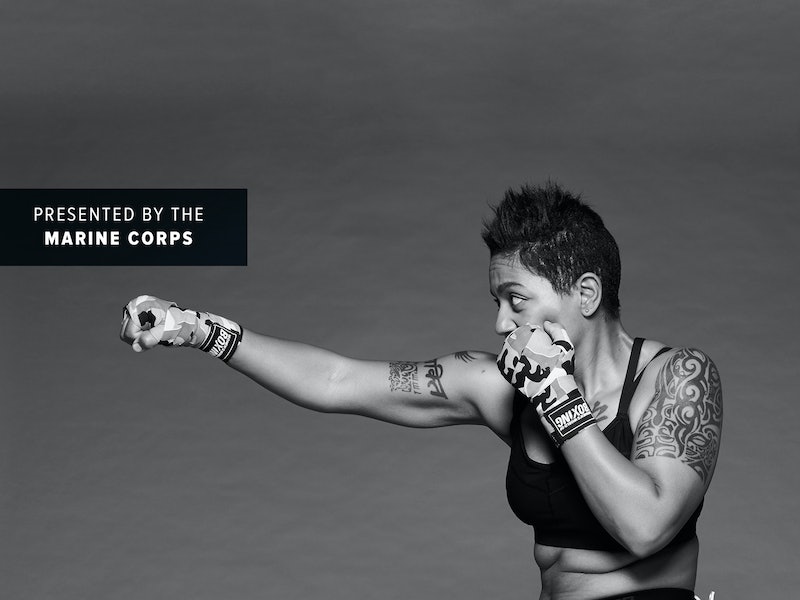 Every woman has her own interpretation of what strength is, but I think we can all agree that now is the time that being a strong woman is more important than ever. Whether you get paid less than your male colleagues, have been heckled while out for a walk or jog, or have been dismissed or undervalued, all women face unique yet hauntingly similar daily struggles. While it can be easy to let these experiences bring us down, true strength comes when we use these moments to empower ourselves even more.

For me, being a strong woman isn’t just about mental strength, but physical strength as well. Growing up I was never completely, 100-percent comfortable with my body — how could anyone be, with the standards women are held to these days? But after getting involved in sports in high school, I was able to turn my insecurity into a strength by challenging myself physically, liberating myself through accomplishing goals, such as improving my speed on the track, or beating an opposing player to the ball during field hockey matches.

I’ve continued to challenge myself athletically to this day, most recently by finishing an Ironman triathlon. Yet the muscular arms, broad shoulders, and bulky calves I’ve developed don’t necessarily look like those of the celebrities and models that grace the covers of glossy magazines and TV screens. What I’ve learned, though, is that being a strong woman isn’t about conforming, but rather about expressing and owning the power you already possess. To inspire women everywhere, we partnered with the United States Marine Corps to highlight variations of female strength through four women who aren't afraid to bare their muscles or voices. To me, that's what's truly powerful.

"Strength is having the courage to be who I am." —Reese Scott

In 2007, Reese Scott founded Women's World of Boxing Club to provide women with a safe and uplifting environment to learn how to box. Training women and young girls in the art of boxing is personal to her because as a child and young woman, Reese herself didn't know her own strength, or have the support or encouragement to help her find it.

"I see a lot of women that are dealing with a lot, and a lot of people tearing them down, and they don't really know how to cope with it, or how to build their strength," Reese says. "So for me, it's very important that I have the knowledge to teach and to help people, and to help women and girls discover their strength and be proud of it, and be vocal about it."

"I live for that second that I see a woman discover that strength she never thought she had."

For Reese, the best feeling as a coach is experiencing the moment when her clients throw a punch and feel their power for the first time. "That moment of self discovery when everything clicks, and the timing is right, where they're landing their punch and making contact and it all feels right," Reese says, "that's a real moment, and I live for that second that I see a woman discover that strength she never thought she had. To see that through the sport of boxing is why I do what I do."

After graduating from the University of Rhode Island in 2011, Danielle Babiak began her career as a middle school physical education teacher and high school crew coach. The former college athlete began practicing CrossFit in 2013 as a way to stay in shape, but stuck with the sport after falling in love with the class structure and close-knit community. As a woman who is constantly surrounded by young, impressionable minds, Babiak hopes to empower her students and athletes through her own actions.

"I want to show that being a strong, confident, mentally tough woman is something to aspire to be."

"I try to be a good role model to my students and athletes by leading by example," Babiak says. "I want to show that being a strong, confident, mentally tough woman is something to aspire to be."

While CrossFit can seem like an intimidating sport, Babiak emphasizes that the CrossFit community embraces all ages, body types, and athletic levels, and the workout itself has made her a stronger, more independent woman.

"I've been doing CrossFit for three years now, and I'm in the best shape of my life, which has transferred over to being more confident and mentally tough," Babiak says. "Being physically strong is important because it allows me to be more independent. My roommate and I moved out of our entire apartment all by ourselves. Last week, I clean and jerked a 36-pack of water into my truck. I'm proud of being strong."

Captain Vernice "FlyGirl" Armour has an impressive resume that includes transforming herself from a local cop to a combat pilot in the United States Marine Corps. She was recognized as America’s first African American female combat pilot* by the Department of Defense and served two tours in Iraq before launching her own company and even playing professional football for San Diego's Sunfire during the 2001 season. Today, Armour is a mother, author, and professional speaker. By sharing how she personally overcame obstacles to accomplish her mission — especially as a minority, LGBT woman — she hopes to empower other women to pursue their own dreams.

"Women already have the power, it's just about bringing that power out."

Armour hopes to inspire women to push themselves — in their career, their personal lives, their workouts, and their side hustles -- and encourage them to make what she calls "gutsy moves."

"[To accomplish your goals], sometimes that requires physical strength, sometimes it requires muscle strength, and sometimes it requires moral strength," Armour says. "Women already have the power, it's just about bringing that power out. When I was in the middle of combat, the officer controller would say, 'You have permission to engage.' But there are no controllers in life, you are the controller. You need to give yourself permission to engage, versus waiting for someone to tell you it's okay."

"Strength is challenging yourself to do the things you never thought you could do." —Erin Kelly

Erin Kelly (yes, the same author of this piece — excuse me while I speak in third person from now on!), discovered her passion for endurance sports while training for her first marathon during her senior year of college. Today, the fitness editor and triathlete's goal is to cover health and wellness topics in a way that empowers women, rather than tears them down.

"I want women to feel more confident about their bodies by building their strength, not by telling them there's something wrong that needs to be fixed."

"I want women to feel more confident about their bodies by building their mental and physical strength, not by telling them there's something wrong that needs to be fixed," Kelly says. "In my opinion, one of the most empowering things a woman can do is challenge herself to do something she didn't think was possible before, whether that thing is training for a marathon, lifting a heavier weight, or even speaking up in front of a larger group."

Through her personal fitness endeavors, Kelly has discovered the sense of empowerment that comes with working and training for something, and accomplishing your goals. By covering fitness with the mindset of working out for strength over vanity, she hopes to encourage women to embrace themselves for what they can do, not how they look.

"I want women to not be afraid of their own strength, and know that it's empowering to be strong and have muscles, despite what they see in the media."

This article is brought to you by the United States Marine Corps.

More like this
9 Unmissable Moments To Relive From The Commonwealth Games
By El Hunt
8 Epic Must-See Moments To Relive From The Lionesses’ Euros Win
By El Hunt
The 'If I Text You This, It Means' Emoji Meme On Twitter, Explained
By Natalia Perez-Gonzalez
The Women’s Super League Just Made Gaming History
By Sophie McEvoy
Get Even More From Bustle — Sign Up For The Newsletter