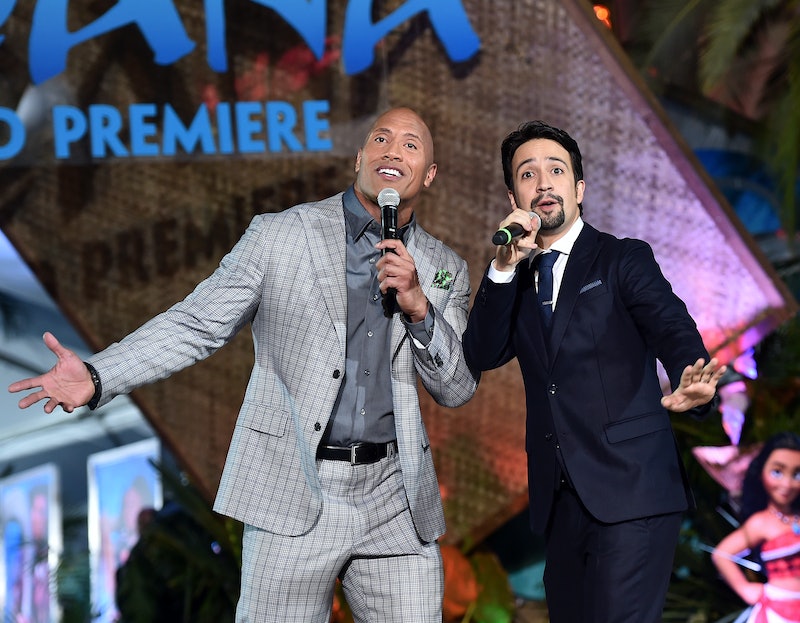 What do you get when you cross a former wrestling pro with the undisputed king of the Broadway scene? A bonafide musical hit for the latest Disney film Moana of course. Dwayne "The Rock" Johnson plays the demigod Maui in Disney's latest animation, which boasts music from none other than Hamilton's creator Lin-Manuel Miranda. Entertainment Weekly revealed Lin-Manuel Miranda's inspiration for Dwayne Johnson's song in Moana — and, according to Miranda himself, he didn't have to look far from the cast member to craft the perfect song for the former WWE wrestler. I love this story because it reminds me of the real joy of Dwayne Johnson: he's such an unabashedly multifaceted person.

“He really sings, and he sings really well," said Miranda. "The only thing I had to prep me, because I wrote his big tune, was there was a while in the WWE when he was a bad guy, and he’d go into town and he’d pull out a guitar and he’d sing about how much he hated the town he was in just to get everyone to boo. So I watched this supercut on YouTube of him being like, ‘Can’t wait to get out of Chicago, it’s the worst’ and they’re all going ‘Boo!’ So I was like, ‘OK, that’s his vocal range,’ and I wrote within that.”

If you're a teenager and reading this, you've probably only ever known him as an entertainer. After all, it's been a long while since he was in the WWE full-time, but he's never been afraid to embrace all the things he wanted to do, no matter if they contradicted each other. Stick around part time in the WWE while figuring stuff out? Sure, why not. Write an autobiography that debuts at the number one spot on the New York Times bestseller list? Yeah, sounds good. Take a main role in a car franchise that is so popular, it's still going? Don't mind if I do.

The joy of Johnson is that he's a living reminder of the fact that we all contain multitudes. So if you want to combine the fierce macho energy of a pro-wrestler with the soaring vocals of your whimsical entertainment side, go for it. If you're even a 10th as good as Johnson at both, you'll be raking in dollars and fans like nobody's business.