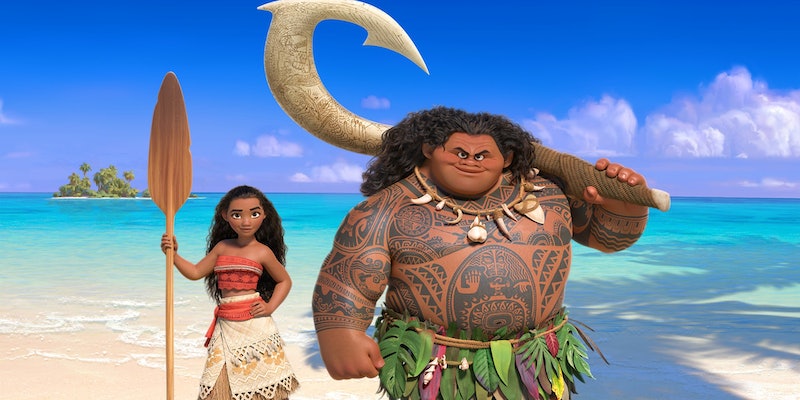 For as long as Disney princesses have existed, there have been princes, be they charming, handsome, or brave, to come along and wake them with a kiss and whisk them off their feet. In recent years, though, the formula has changed, and Disney's princesses have been fiestier and more independent than those of the past. Rapunzel longed to explore, Tiana wanted to cook, and Mulan fought in a war. But even these ladies always had love interests to come along with their quests, and even more feminist princesses like Merida and Elsa were unable to escape the prospect of male companions. Disney's latest heroine, though, the Polynesian hero Moana , is the first Disney star (no, not a princess) with nary a love interest in sight, or even in mention. This makes her revolutionary, yes, but the movie's strength is how you don't even notice that the love interest is missing.

In the grand tradition of animated Disney musicals, Moana tells an inspiring story through utterly incredible visuals and catchy songs, this time co-written by Hamilton's Lin-Manuel Miranda. Newcomer and native Hawaiian Auli'i Cravalho plays Moana, the daughter of the chief who is destined to rule her people. Moana, however, longs to explore the sea rather than stay put on her island. When her home begins to decay, Moana chooses to venture beyond its barrier reef to seek out the demigod Maui (voiced by Dwayne "The Rock" Johnson) so that he can return the jeweled heart he once stole from an Earthly goddess, and break a curse. What makes Moana stand out from the pack is that the dominating male-female relationship in the film is one completely lacking in romantic suggestion.

Romance between Moana and Maui would be unacceptable, of course, as Maui is an ageless demigod while Moana is a teenager. But it's great to see that their relationship never even touches the possibility of romance. Instead, their bond is one first of adversaries, then one of comrades working together on a team. They face their own ups and downs, but Maui remains Moana's friend through it all.

And there's no hint of romance for Moana back on the island, either. Despite all the talk of Moana being groomed to take over as chief, none of the conversation in the movie veers into marriage territory. There's never a mention of who Moana may end up with, or anything about eligible bachelors or betrothals. Moana is free to lead and explore the world on her own, and this is what makes Moana so different, and so important. Brave was essentially a mother-daughter story, but the conflict between them was the result of her forced marriage. And though Elsa was a single queen, Frozen wasn't without its own love story between Anna and Kristoff. But with Moana, romance isn't even a part of her story at all. It's surprising for a Disney movie, but at the same time, totally normal for real life.

What's even more amazing about it is that you don't even notice the lack of a love interest while watching the movie. At no point throughout the story while Moana is belting inspiring songs, navigating the gorgeous ocean, or rescuing the hilarious chicken sidekick Heihei does one think, "Hey, this would be even better if she had like a boyfriend." Moana exists just fine without one. It's a far cry from the storylines of Disney movies in the past (Tiana got her restaurant, but not without also getting her prince), where despite plenty of our beloved princesses having admirable qualities like bravery, intelligence, and strength, nearly all of them can't end their stories without getting their "happily ever after" and falling in love. Hopefully, the fact that audiences can easily enjoy Moana without needing to see her love life will inspire the studio to continue the trend.

With many female-driven films in the pipeline, there's plenty of opportunity for Disney to continue exploring stories about female characters that don't rely on them finding the right husband, or even entertaining a flirtation — though if Frozen 2 wants to explore Elsa finding the right wife , that would be a whole different revolutionary tale.

More like this
12 ’90s Movie References You Missed In 'Do Revenge'
By Radhika Menon
Harry Potter's Viktor Krum Has Undergone A Huge Transformation Since Hogwarts
By Sam Ramsden and Meguire Hennes
What Does Nancy Jo Sales Think Of 'The Real Bling Ring'?
By Arya Roshanian
Netflix Reveals First Look At Wednesday In The 'Addams Family' Spinoff Series
By Bustle Editors
Get Even More From Bustle — Sign Up For The Newsletter