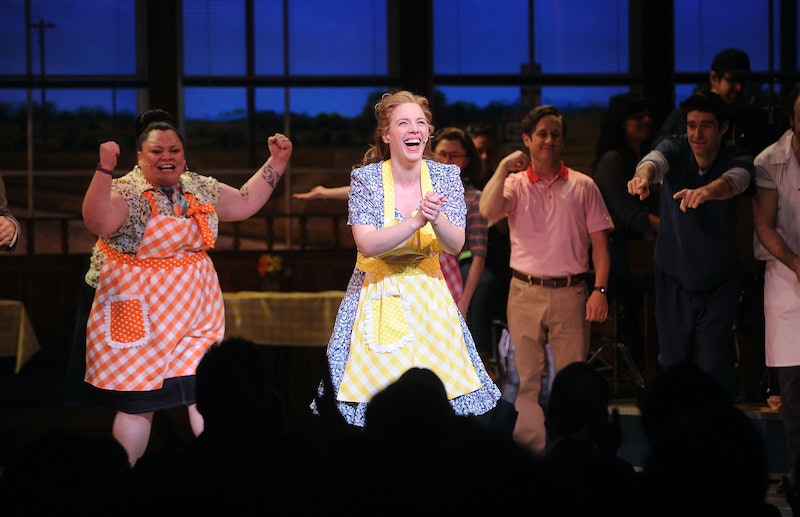 When it comes to musicals that are essential viewing for Thanksgiving, Waitress wins hands down. And that's because the Waitress Macy's Thanksgiving Day Parade performance perfectly celebrated everyone's love of pies, and the internet went into meltdown as a result. With music and lyrics written by the inimitable Sara Bareilles, the musical has been receiving incredible reviews since it opened, making the cast's appearance at the Thanksgiving Day Parade all the more exciting, and the perfect fit for the holiday.

Based on the movie starring Keri Russell, Waitress tells the story of a woman named Jenna who's in an unhappy marriage, so she has an affair with her doctor. She accidentally becomes pregnant, and needs a way out from her problems. So she does what any woman in her situation would do — she enters a pie baking contest and aims for first prize. Upbeat, quirky, and endlessly hilarious, Waitress has a secret weapon besides its killer script. As The Hollywood Reporter said in Dec. 2015, Waitress is "the first-ever Broadway musical with an all-female creative team," making it groundbreaking, boundary-pushing, and the show we all need more than ever right now. And as you'd expect, the cast of Waitress killed it during their Macy's Thanksgiving Day Parade performance, and the responses range from heartfelt, to hilarious, to pie, obviously.

There Were Sad Tears

Don't worry, you weren't the only one crying.

Because the cast of Waitress are so good.

And A Whole Range Of Emotions

We Learnt How To Bake A Pie

They Made Us Want To Eat Pie

Luckily, Thanksgiving is all about the pie.

The World Realized That Waitress Is The Musical For Them

What's not to love about a pie-themed musical written by Sara Bareilles?

It's Never Too Early For Pie

Pie for every meal.

And It Reminded Us Of What The Day Is All About

The Macy's Thanksgiving Day Parade had so many great moments, but seeing the cast of Waitress perform was definitely one of the highlights. Now back to the pie.