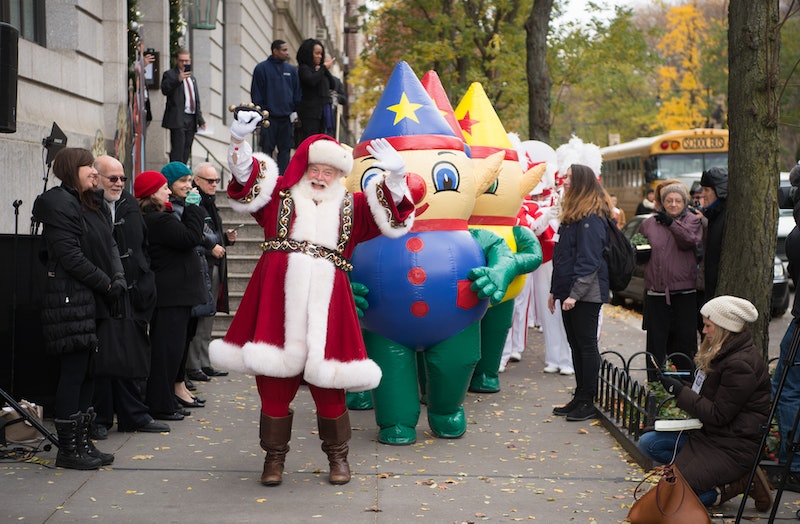 It's finally here: Thanksgiving. That means Gilmore Girls, pumpkin pie, lots of turkey, family dinners (and probably a few arguments), holiday traffic... and, of course, the one thing no one could ever forget about: the annual Macy's Thanksgiving Day Parade. Rain or shine, dozens of inflatable balloons, floats, marching bands, and musical numbers will dominate the streets of New York for the 90th year running on Thursday morning. If you're not one of the people standing outside in freezing pre-dawn weather, hoping to catch a glimpse of a Snoopy balloon, you can watch the festivities from the coziness of your own couch. Or bed. Or kitchen chair. However you decide to take in the parade, we've got you covered on the ways that you can watch. After all, you can't have Thanksgiving without the Macy's Parade!

Despite the promises of rain on parade day, this year promises to be bigger and better than ever — there's even going to be a Felix The Cat balloon, a replica of the very first balloon to celebrate 90 years of Thanksgiving tradition. Check below for ways that you can get in on the fun without even putting on a coat.

Watch It On TV!

The 90th Annual Macy's Thanksgiving Day Parade airs Thursday, November 24 at 9 a.m. ET on NBC. The parade lasts for three hours, so get those coffee mugs and pancakes ready, because you never know if you're going to have to go to the bathroom during the newly unveiled Trolls float.

You can stream the parade on the official NBC website, but only if you have one of the listed cable providers and you can verify that. If you don't have one, maybe your relatives have on — milk that visit for all it's worth!

Another way to watch the parade? Facebook! The official page offers a livestream for the 2016 parade, set to start at 9 a.m. (For now, there's just placeholder from last year's parade.) Not only that, it's in HD!

Social media is the best way to keep track of all the breaking news these days, and this way, you can get all the goods without even turning on the television. Plus, it's 2016, which means the parade really wants you to engage and talk about the performances and floats. Use the hashtag #MacysParade to search all the latest news and updates while the parade is going on. And who knows... you might get a RT or a mention from Macy's and/or NBC while you're at it!

Whatever way you decide to watch the parade, there's no question that it'll be an enjoyable addition to your Thanksgiving morning.