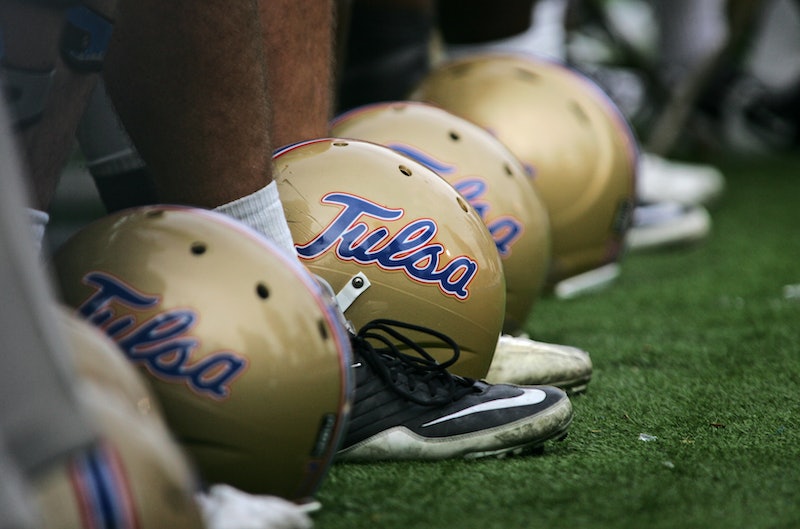 It's hard to be from Tulsa when you live somewhere else. Oklahoma, in the eyes of the rest of America, is forgettable at best and backwards at worst — and you're probably lucky if they even know where Tulsa is. (My first week at college, I met a girl from Manhattan who honestly didn't know that we had cities in Oklahoma.) But it's not all cows and football: Tulsa is a major metro area boasting two universities, a ton of music venues, and, okay, enough barbecue joints to overwhelm even Ron Swanson. Many of us are proud to call Tulsa home, because there are some things you can only understand if you grew up there:

1. You've been to the Center of the Universe, and it's in downtown Tulsa.

And when you're in just the right spot, it sounds like you're in a glass tube. Plus there's that weird statue.

2. You've waved at Paul Tay riding his bicycle in his Santa suit.

Maybe one day he'll succeed in becoming mayor. Hopefully not.

3. Living within a one-mile radius of at least five churches isn't anything unusual.

And you can't decide whether ORU's giant statue is two hands folded in prayer or two subterranean giants high-fiving.

4. You've heard a tornado siren go off, run outside for a glimpse, and run back inside when you realized that was stupid.

You've probably done this for more sirens than you'd care to admit.

5. Speaking of tornadoes, you've memorized every possible twister categorization and safety procedure, because you know just how scary they actually are.

6. When people from other states tell you how 'intense' their weather is, you just smile and nod.

7. You never have to check Google Maps, and you measure distances in minutes instead of miles.

Because except for the highways, Tulsa has the most beautiful street grid known to humankind. The perfect place for a directionally challenged high-schooler to learn to drive.

8. You still love Hanson and you don't care who knows it.

9. You've been to the Admiral Twin drive-in, and like to brag that that scene in The Outsiders was filmed there.

Then you move away and realize no one else has seen The Outsiders.

10. You get really excited when the Arkansas River grows into anything more impressive than a giant puddle.

11. You've waited in line for an hour just for one of those tasty, tasty waffles at Brookside By Day.

12. You have owned a pair of cowboy boots. You probably wore them everywhere.

That vast array of soda options! Those 79-cent summertime drink specials! Those weird hot dog-shaped hamburger rollers! When will we be reunited once more?