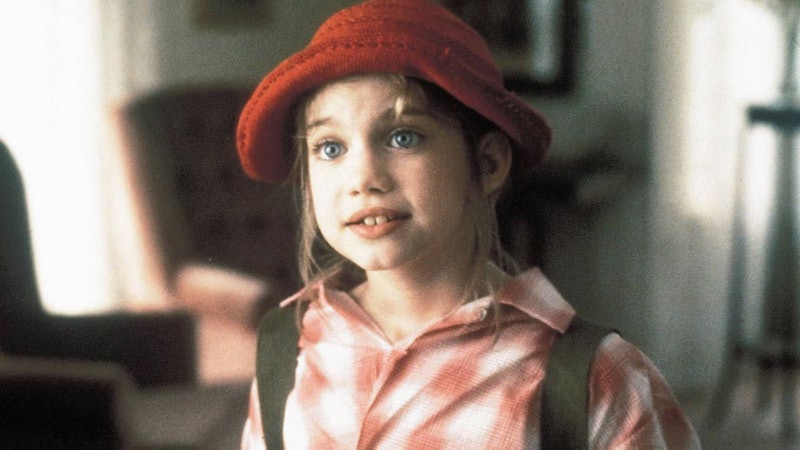 I vividly remember the first time I watched the 1991 movie My Girl — and not just because that heartbreaking ending left me crying for days. What stood out to me most was that Vada was so different than most of the tween girls in the movies I'd watched — she couldn't be boxed into any stereotype and she was refreshingly realistic and complex. Yes, Vada fell into the "tomboy" category, but she also had an adorable crush on her teacher. She was way smarter and stronger than the average 11-year-old, but she certainly had her moments of vulnerability. And, upon rewatching the film for its 25th anniversary, I was reminded why Vada from My Girl is the most underrated '90s heroine.

Like her best friend Thomas, Vada wasn't the most popular one in the room. Although she was clearly hurt when neighborhood girls mocked her (what 11-year-old wouldn't be?), she didn't do anything to change herself or her behavior just so she could enjoy the comfort of fitting in. Plus, she was fierce — although she brushed it off when her peers made fun of her, Vada immediately schooled the boys who bullied Thomas. In short, Vada stuck to her guns and she knew that one loyal best friend was worth way more than 10 fake BFFs.

Plus, let's not forget this tween was tough as nails and she spent a lot of time suffering in silence. Vada's mom died during childbirth and, early in the movie, she tells viewers through a voiceover that she's afraid she killed her mother. She carries this heartbreaking burden with her every single day until she finally has a heart-to-heart with her dad after Thomas' death and bluntly asks him, "did I kill my mom like the bees killed Thomas?" It's clear that, despite the fact that her dad has a good heart and the best of intentions, he hasn't helped Vada cope with her mom's death because he hasn't come to terms with it himself.

Another thing that set Vada apart in an amazing way was her intellect — and I'm not just talking about her sassy one-liners (although, let's be honest, they were amazing). She wanted to be a writer and not just so she could attend a summer class taught by her crush, Mr. Bixler. Vada was slightly out of place because, you know, it was a course for adults — but her beautifully written poem "Weeping Willow" proved that she would be able to make good on her promise to dedicate her first book to Shelly, her new stepmom. Wherever this fictional character ended up, I'm totally confident that she became a published author just like she'd always dreamed.

Finally, Vada's resilience is astounding. Not only did she have to cope with her mom's death, but she lost her best and only friend. Thomas' death caused a heartbreakingly realistic breakdown, but she's shown moving forward with her life several months later — although she knows that her loved ones will always be in her heart and the pain will never go away entirely. Vada always kept a stiff upper lip when it came to her mom's death, but when she allowed herself to be vulnerable (which is no easy task for many girls), it was an important step because she finally honored the emotions she'd forced herself to suppress for so long. Vada took comfort in her memories and used writing to express the impact of Thomas' death — but she also refused to let any experience break her or crush her spirit.

After I watched My Girl , I suddenly felt better about consistently being the odd one out amongst my peers (that tends to happen when you prefer books to more acceptable and "cool" social activities). I bought a mood ring to wear everyday as a reminder to be more like Vada — resilient, smart, and unapologetically authentic. Twenty-five years after the film's release, I'm even more convinced that Vada is the most underrated heroine of the 1990s — and adults can learn a thing or two from her as well. In a world that constantly tells us to conform and throws us tragic curveballs, we could all stand to be a little more like Vada.