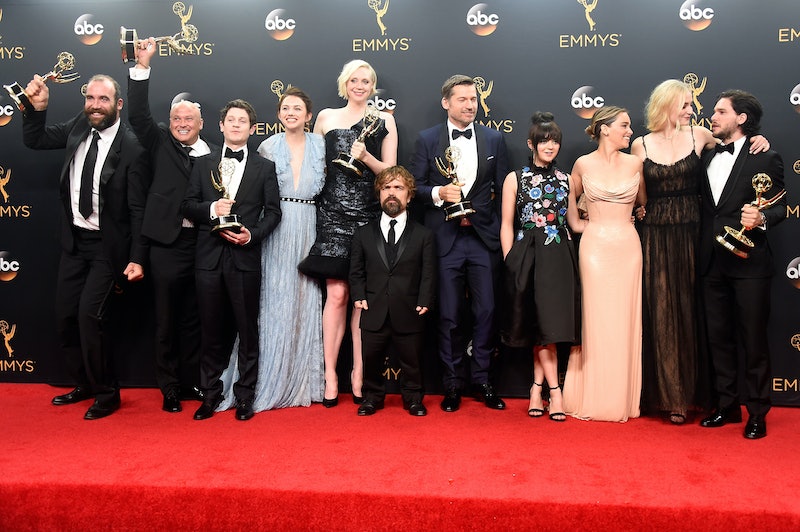 Now, I am not saying that the Game of Thrones cast has the best Instagram accounts out of all the current TV casts. Actually, yeah, I am saying that. Not only do they all have wildly more upbeat and humorous personalities than their alter egos, but they make sure to put that on display for the world to see. Who can blame them? Existing in Westeros can be pretty dismal. It's only fitting that they'd be cheerful and silly when they aren't filming. While the actors have posted many, many photos on their Instagrams, some stand out more than others. And, in the spirit of spicing up this long hiatus, I thought we should look at the best Instagrams ever posted by the Game of Thrones cast members.

Now, I know what you're thinking. There are so many GoT cast members, how can you possibly narrow it down? Well, fortunately, the cast takes pictures together so frequently, choosing one photo over the other doesn't feel so difficult. They're kind of in all of them together. The best part? Even those actors who don't share scenes or film together seem to find the time to hang and capture the moment. Which is all kind funny considering there's no such thing as phones, or the internet, or Instagram in Westeros.

Here are 31 of the best Instagrams ever posted by the Game of Thrones cast:

2. Or, When They Went Out On The Town Together

3. Honestly, When They Do Anything Together

But, especially when they caption a photo with their anniversary.

4. When These Two Hung Out Under Totally Different Circumstances

5. This Sis And Bro Date

Those Greyjoys, man. They know their camera angles.

7. When Jaqen Broke The Ice Between Theon And Ramsey

8. When Khaleesi Came To Life

9. When The Cast Proved That They Do Smile... Just Outside Of Work

Three Game of Thrones actors walk into a stadium...

10. When Ned Stark's Kids* Proved They Should Have Been On The Cover Of Vogue

*Both biological and adopted.

11. When Khaleesi Got To Meet With Her Adoring Public

12. When The Cast Did Something Totally Normal, Like Go To A Concert

13. When GoT Did A Crossover

Cersei and Khaleesi? My eyes must deceive me.

16. When Khaleesi Was The Queen Of Captions

17. When Dessert Got Slightly Intrusive

Well played, who ever served Sophie Turner that day.

18. When The Faux Stark Sisters Shouted Out Their Couple Name

Mophie? It's got a ring to it.

19. When The Girls Got Super Affectionate

Too bad they're not like this on the show.

20. When Comic Con Brought Out The Cast's Wild Side

It's nice to see them loosen up.

21. When The Stark Girls And Margaery Were Jet Setters

22. When They Did Some Impromptu Car Karaoke

The girl's got pipes.

23. When Khaleesi Got Nostalgic Over How Fast The Stark Girls Have Grown

24. Quite Possibly The Best Hair And Make-Up Selfie Ever

25. When This Epic Selfie Happened

Those fans were so lucky!

26. When Khal Drogo And Khaleesi Broke Our Hearts All Over Again

That was a great bit, btw.

28. When We Got Stark Kid And Direwolf Love

29. Another Direwolf Pic For The Road

Who knew Direwolves were so festive?

30. When The Most On The Nose Cast Photo Was Taken

The caption, the drink, the fuzzy coat. It's perfect.

31. When Khal And Jon Proved They Were Bros

Oh, what could have been.

So, yes. The Game of Thrones cast is the absolute best and quite Instagram savvy.