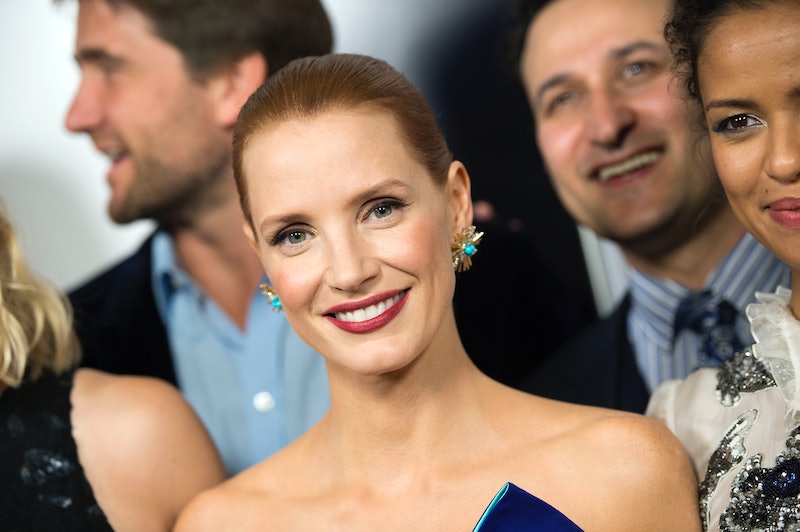 The Gilmore Girls revival was a treasure trove of pop-cultural reference points, which must have made it kind of a weird experience to watch for the host of celebrities it name-checked. Among that list was Tree of Life actor Jessica Chastain, whose immediate reaction to people nudging her on Twitter about her name being cited seemed to go something along the lines of "Huhhh?" OK, exaggeration. Chastain's Twitter reaction to her Gilmore Girls shoutout was of the level of eloquence you'd expect from the gender equality warrior, but still — the main thing was, it expressed a certain level of confusion.

When a fan on Twitter (@jeschastainiac) screenshotted Taylor Doose's mention of the famous redhead, along with subtitles stating, "Jessica Chastain bought a full bag of assorted toiletries," it was a context-free look at the reference. So anyone can understand Chastain's befuddlement when she asked for an explanation: "Ok can someone explain this to me? What were the toiletries for?" So if this is the actual Chastain reading this, or someone so obsessed with the star that their Twitter handle mushes up her name with the word "maniac," please, allow me to be your guide to the wonderful world of Stars Hollow. You see, Stars Hollow is this extremely twee, chocolate-box style town in Connecticut.

Since they're a very twee town, they have an appropriately adorable form of democracy: They run their town's affairs in a meeting where anyone who attends gets to vote on issues that affect their town. Because Stars Hollow is all sorts of quirky, these issues are rarely mundane but necessary topics like parking spaces or school districts. Nope. Instead, town selectman Taylor argues that their town should be banning B-list celebs staying at Lorelai Gilmore's inn during the filming of a movie in the area. Why? Because they're bad for the town, since they don't spend much money and after all, all the really important celebrities — like you, Chastain, and Matthew McConaughey and Jennifer Lawrence and Daniel Radcliffe — are all staying one town over because there's a nicer hotel there with bigger rooms and space for mini fridges.

And here's where we get to the heart of the matter: Taylor claims you and the rest of the A-listers are all big spenders. But then he goes on to list what the A-listers bought: Chastain went out and bought a basket of toiletries and two sundresses. Yep. Not exactly what you'd think of as a vast A-lister shopping spree, so presumably this part was a winky look at what a cheapskate Doose is. So don't ask what the toiletries were — that isn't, presumably, the crux of the gag. The gag is that Stars Hollows wanted you because you're a big shopper and that this isn't even true.

But next time you go to buy a basket of toiletries, Ms. Chastain, please don't forget to loop @GilmoreGirls in on Twitter — I'm sure they'd be excited to be proved right.