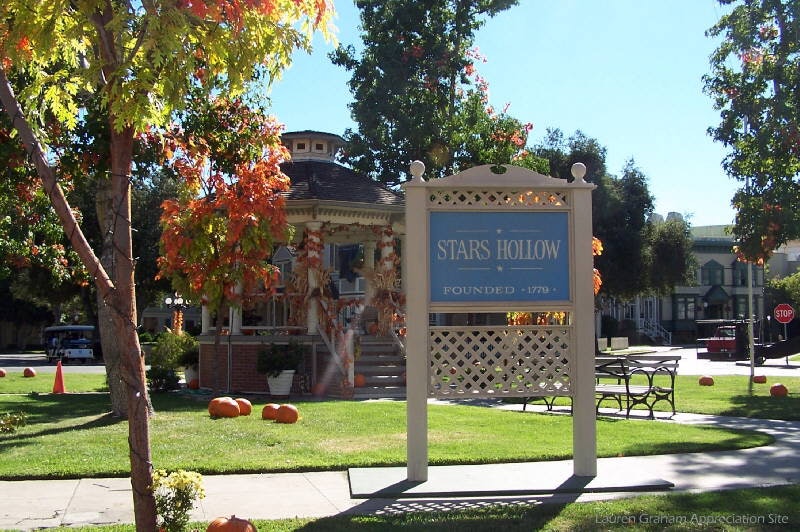 The announcement of a Netflix-based Gilmore Girls revival has fans packing their bags for a return to Stars Hollow. And, with filming already underway, it's nothing less than heart-warming to know that the Warner Brothers lot is currently featuring the very town that Rory Gilmore grew up in. Because, unlike classic shows who have seen reboots — such as Full House and Boy Meets World — Gilmore Girls not only took us on a journey with the characters, but it made us feel like we were apart of the very town they lived in. With constant updates on gossip, town board meetings, and a variety of odd characters, Stars Hollow was brought to life. So, what are fans looking for in the Gilmore Girls mini-series revival? Answers to all of the questions fans have about Stars Hollow, of course.

When it comes to the constant stops at Luke's Diner and the nonstop musings of Kirk, we know that these characters aren't going to get left behind. In fact, even if all the actors don't return, I'm pretty sure we can expect some kind of explanation for all of them. The citizens of Stars Hollow don't only hold a special place in our hearts, but they also greatly impacted every single day of Lorelai and Rory's lives. And, if we notice someone is missing, well, the Gilmores are sure to notice as well. So, get your notepad ready, because these are the things to anxiously look out for when you and your suitcase land at the Inn.

1. Is Taylor Still Running The Town?

Taylor was in charge of all of Stars Hollow's town meetings, monthly events, and even caused his fair share of commotion by hiring all of the construction workers. But, is he still in charge of everything? While Taylor would certainly be ruthless in handing the responsibilities to anyone else, he also has gotten older over the years.

Miss Patty is determined to keeping Stars Hollow moving and appreciative of the arts. However, with her newfound old age as well, it's possible that her business has been passed down to someone else as well.

While it's a known fact that Miss Patty has had her fair share of marriages and love affairs over the years, it's also possible that she was just waiting for Mr. Right. And, knowing Miss Patty, running away from Stars Hollow to be with a newfound lover is also something I would be wary of her doing.

Without Babette, Stars Hollow's gossip wheel just wouldn't be the same. I've got my fingers crossed that Miss Patty and Babette's friendship has only gotten stronger with age. I honestly don't see Babette finding another circle to be quite as interesting as the rumors flying around Stars Hollow.

With the realization that Lane is no longer a teenager weighing over her, perhaps Mrs. Kim has opened up a bit? I'm ready for a friendlier, more town-inclusive version of her.

6. How Is Lorelai's Inn Doing?

Gilmore Girls fans couldn't be prouder of the creation of the Dragonfly Inn, but is business still booming? With Yanic Truesdale confirmed to return as Michel, I have a feeling things at the inn are running smoothly.

I know, this may seem like an odd question. But, with all of Kirk's big dreams and crazy endeavors, how do we know he doesn't have an Olympic gold medal at this point?

Has he finally settled down with one career path? My guess is probably not. But, then again, we have no idea what kinds of successes he could have encountered over the years, and, honestly, Stars Hollow would fall apart if Kirk wasn't always willing to step in and save the day.

9. Are Kirk And Lulu Still Together?

Kirk and Lulu together was nothing less than pure perfection, but are they still together?! I would think so. But, then again, we weren't the ones spending every day of the past nine years with him.

Assuming that Kirk is still with Lulu, did they actually decide to start a family together in Stars Hollow? It's totally possible. And, as scary as that thought may be, I actually think little Kirks running around would be adorable and hilarious.

11. Are Sookie And Jackson Raising Their Kids In Stars Hollow?

I want this to be the case so badly. And, with Jackson confirmed to be returning for the Gilmore Girls revival, it's not completely off the table. However, with Melissa McCarthy not returning, the confusion starts to set in. Are Sookie and Jackson divorced? Who's taking care of their kids? And where are their kids now?

Whether there's anything is going on between those two or not, you know that Lorelai would do whatever it takes to keep that place open. I am so ready for another round of breakfast at Luke's.

Towns never stay the same. New people move in, new businesses are opened, and the new slowly replaces the old. So, what new people and stores can we expect in Stars Hollow?

14. What Old Stores Are No Longer Around?

With the possible introduction of new stores and the aging of different town members, it only makes sense that certain business shut down. While Luke's Diner seems like a keeper, maybe the beauty store will reach it's end? Or was it Taylor's Old-Fashioned Soda Shoppe that took a hit?

15. Is Rory Still The Face Of All The Town Events?

Rory was the poster child of Stars Hollow, but, with her newfound adulthood, has that ship totally sailed? And who is the town's next generation of kids?

16. Who Is Showing Up For Those Town Meetings?

So, how can we get a full picture of who is still in town? At one of those famous Stars Hollow town meetings, of course. Whether Taylor is still holding the gavel or not, I know that they have to have at least one in the mini show revival.

17. Is The Town Troubadour Still At It?

Did this show make you wish that your town had a random Town Troubadour as well? Sometimes a little random song from the assumed bystander is all you need.

18. Did Anyone Fix That Broken Stop Light?

If they haven't fixed the light by now, I'm pretty sure it might have stopped working all together. Let's just hope that Stars Hollow hasn't gotten too congested over the years...

Despite all of our burning questions, one thing is clear. Stars Hollow is back, and it's sure to still have that small town charm.