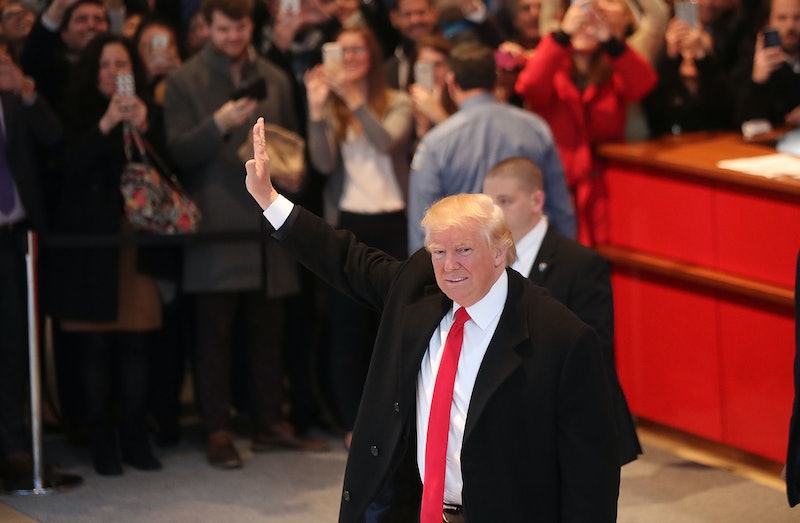 The Nov. 8 election devolved into an ongoing nightmare that seems destined to last the next four years. Although the ongoing recount and vote audit campaigns have brought the tiniest ray of hope, the United States is more than likely going to be stuck with a president who scares millions of his constituents for legitimate reason. These seven scary things Donald Trump has said since the election that make it clear you have the right to be scared for the future of this country.

Plenty of people have probably tried to invalidate your fears about Trump with consoling words about checks and balances or aggressive campaigning, but honestly, Trump hasn't done enough to show Beyond even the policies he's talked about since the election, most of the scariest stuff he's said just makes it seem like he's just looking out for himself. Since he hasn't made himself very available to the press for questions, all anyone has to go on is his social media, which paints a pretty grim picture. Judging by his Twitter account, Trump's reputation and his net worth are the two most important things to him, and that doesn't seem to be changing as he becomes to leader of 320 million Americans. These seven scary things Trump's said show that his presidency won't be one for the people, but for himself.

Trump's spent a disproportionate amount of his post-election time tweeting about the "failing" New York Times and bashing their coverage of him. As he continues to demean objective news organizations, people will keep turning to fake news sources and Trump's unaccountable YouTube and Twitter posts for "unbiased" coverage.

About His Business Interests

He says this like the majority of people in the United States didn't vote for him, and were perfectly ok with this situation. It's more evidence that he doesn't care about being president for the people, and is really just in it part-time.

He sounds like a kid trying to convince his group members that his portion of the group project is already done when he hasn't even started yet. Plus, the allusion, intentional or not, to a reality show/beauty pageant is disturbingly indicative of his future management style.

Trump's fraudulent education scheme scammed thousands of hopeful people, but because he has the platform, he gets to control the narrative of what happened. Instead of this incident becoming another reason not to trust him, he gets to look like the good guy by backing down from a fight he probably would have lost.

In Trumpland, political institutions are only legitimate if they benefit him. Now that he has the power of the presidency, it's terrifying to think what he might lobby to change, from term limits to checks and balances.

Trump promised to "cancel job killing restrictions on the production of American energy, including shale energy and clean coal," which basically means he wants to keep the country dependent on dirty energy that will continue to destroy the environment.

“What we are going to do is get the people that are criminal and have criminal records, gang members, drug dealers, where a lot of these people, probably 2 million, it could be even 3 million, we are getting them out of our country or we are going to incarcerate,” Trump told 60 Minutes during his first post-election interview. The problem there is that there aren't even that many criminal undocumented immigrants, so there's no telling what Trump might do in order achieve that goal. No wonder private prison stocks spiked recently.

Trump has proven that there's still reason to be scared of his leadership, but you should turn that fear into action wherever possible. Just because he's president doesn't mean you have to spend the next four years putting up with it — you can still fight to make sure he doesn't cause too much damage before a new president comes in in four years.