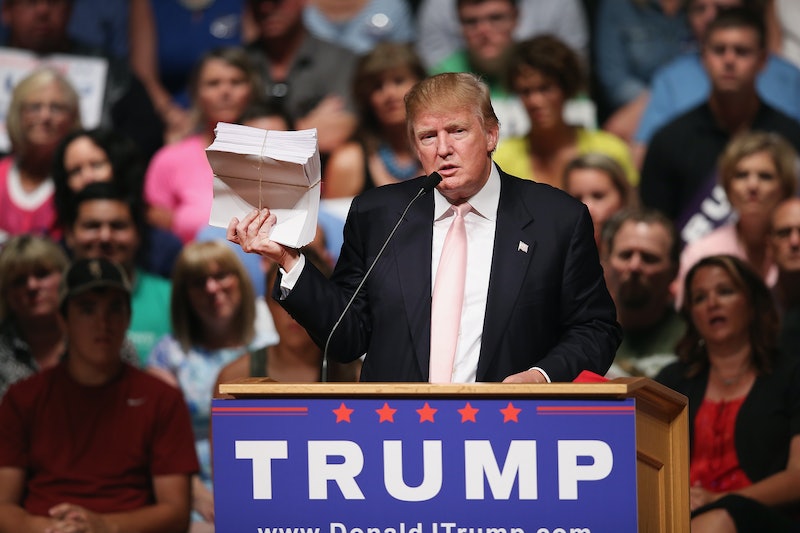 Recently a mosque located just a few miles from where I live received a letter warning, "there's a new sheriff in town — President Donald Trump... he's going to cleanse America and make it shine again and he's going to start with you Muslims." The episode is just one of many racist incidents reported in states across the country in the weeks following Donald Trump's election, but it had me concerned nonetheless. While the letter received by the Evergreen Islamic Center in San Jose was meant to instill fear, it actually inspired me to write a letter of my own — this one to the president-elect himself. So, how can you send a letter to Trump? There's more than one option for getting your voice heard.

While writing a government representative is a relatively easy task, actually getting your letter in the hands of its intended recipient is often times a whole other story. It's virtually impossible to guarantee that any letter you send to Trump will actually be read by the man himself. Still, I'd argue it's better to have tried (and had your concerns and opinions read by a member of Trump's staff) than to have never tried at all.

There are a few different ways one could go about sending a letter to the president-elect. If brevity is your strong point you might consider tweeting your concerns to Trump in 140 characters or less. Trump has previously called Twitter a "very effective form of communication" and routinely uses the microblogging website as a means to share his message with supporters and critics. Who's to say it can't work both ways?

For those who need more than a sentence or two to get their point across politely, however, there's a variety of options. Letters to Trump can be sent electronically to him and his team via both his presidential campaign website and a website established by his transition team following his election victory. If snail mail is more your style, you can try to send your letter to Trump Tower in Manhattan at 725 5th Avenue, New York, NY 10022. You may also be able to send mail to the Washington, D.C., headquarters of Trump's transition team at 1717 Pennsylvania Avenue NW, Washington, DC 20006.

You could also opt for an open letter format, meaning you don't actually send Trump your letter but rather publish it online through either a personal blog or a platform like Medium with the hope it picks up traction online. More than a handful of people and organizations have penned open letters to Trump, including the National Press Club and Humans of New York.

No matter how you decide to reach out to Trump, I think it goes without saying that the most effective letters get straight to the point and remain polite and respectful. You may disagree with Trump's Cabinet picks and immigration policies, but calling him "Cheeto Jesus" won't encourage him to take your concerns seriously.

I can't say if my letter (I sent it to him through his transition team's website) will actually make it past a staffer and on to Trump's desk, but I feel a tad more OK with myself knowing that I've at least tried to throw my two cents in regarding the damaging effects his anti-Muslim rhetoric has had in my own town.