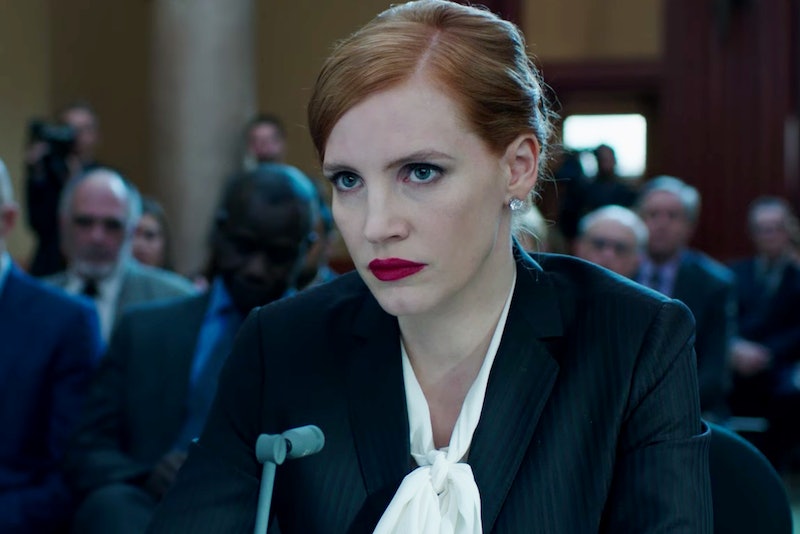 In her new film, Jessica Chastain looks like the kind of woman you wouldn't want to mess with. The Oscar-nominated actor plays the title character in Miss Sloane, which debuted in theaters over Thanksgiving weekend. Elizabeth Sloane is a steely D.C. lobbyist with an imposing reputation and a career that takes a turn when she takes the lead on a proposed firearm regulation. The gun control debate is a heated and expensive one in the United States, so this movie is certainly relevant. But is Miss Sloane based on a true story?

The screenplay was written by first-timer Jonathan Perera and is directed by John Madden, of Shakespeare In Love and The Best Exotic Marigold Hotel series. The main plot of Miss Sloane is fiction, and the character of Elizabeth Sloane is not based on one particular lobbyist. However, as part of her research for the film, Chastain met with real female lobbyists working in Washington. Their numbers are few; lobbying is still a field dominated by men. “They all had to work harder than their [male] counterparts,” Chastain told Entertainment Weekly.

In an interview with Awards Daily, the actor said, "I initially thought I’d be playing this character with no makeup, the same clothes, and this work-obsessed woman." But the women she met with cut quite the opposite figure. Chastain said:

Neither the lobbyists she spoke with nor the fictional Elizabeth Sloane give a damn about softening themselves for the comfort of others or prioritzing likability over doing their jobs. In that way, one of the most casually shocking moments of the lead-up to the 2016 presidential election spoke to the actor's concept of her character: Trump's off-the-cuff, mid-debate insult of Hillary Clinton. “So Elizabeth is a nasty woman," Chastain told The New York Times. "Because for me, a nasty woman is a powerful woman who is overprepared for a debate, knows what she’s doing, is ambitious and not afraid to step forward.”

Screenwriter Perara told Gold Derby that he was inspired to explore the profession of lobbying when he saw a televised interview with author and former lobbyist Jack Abramoff, who served prison time for a combination of fraud, tax evasion, conspiracy, and corruption charges related to misuse of his position. "We've seen the politicians front and center in shows like The West Wing and in various movies as well; what we haven't seen are the power players behind the scenes, trading in influence, pulling the strings," Perara said. "It's kind of like the intersection between politics and espionage."

Miss Sloane opened during a strange, combative moment in politics. Director John Madden told The New York Times in the same interview that he reckons "people’s interest in the political process is either completely exhausted or it’s extremely heightened" at this point. "You’re going to see the film differently through the prism of what’s happened, and it depends on which side of that argument you come from," Madden said. Though the movie takes cues from a controversial aspect of real political process, the director ruefully called the film "a fantasy" in that it shows a piece of gun legistlation being seriously considered, which, to him, is "far away from anything we can conceive, sadly, for the foreseeable future."

Films are not released in a vaccum. And though it is a drama, the subject matter of Miss Sloane is made more immediate by what's going on in the world.