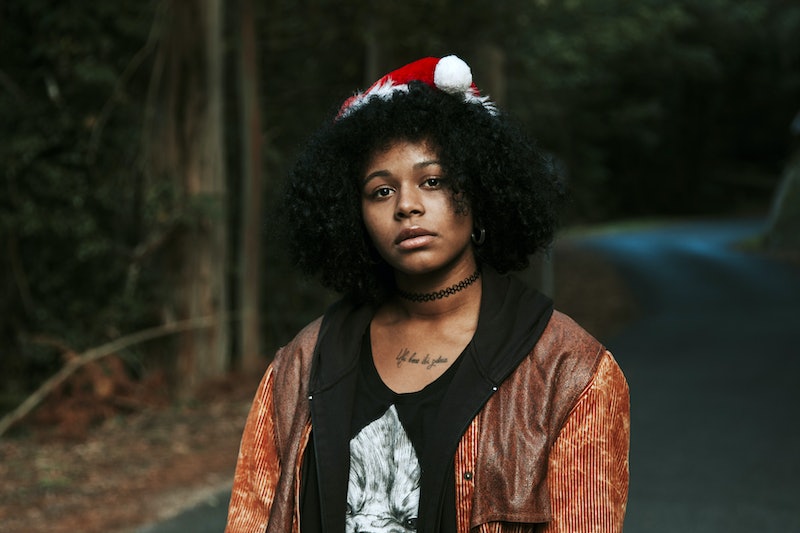 The holiday season has been dubbed as "the most wonderful time of the year" by carolers across the country. Undoubtedly, the holidays are stressful. I can't remember a year where I wasn't in a constant state of panic, whether it was over the amount of money I was spending on gifts or my answers for the thousands of questions asked by distant relatives. Whatever holiday you're celebrating — Hanukkah, Christmas or you're just gearing up to celebrate 2016 finally ending — there's likely to be a bit of tension along the way. And unfortunately, sometimes we take that stress out on people close to us, like our significant others.

While the holidays are supposed to be about spending time with the ones we love, sometimes there's too many expectations weighing on relationships, which is how many breakups come about. "If you find that the two of you can’t stop fighting and the fighting is escalating, chances are, you’re heading towards a holiday breakup," April Masini, New York based relationship expert and author, tells Bustle. "There’s a lot more pressure at the holidays to be romantic, and when you don’t feel it, many couples throw in the towel instead of powering through."

Just because it's the holidays, doesn't mean everyone is safe from breaking up with their partner. Relationships aren't immune to bad timing. But if you're worried that you're headed towards a holiday breakup, there are some signs you can watch out for. Here are seven things that indicate you might be heading toward a holiday season split:

1. They Don't Invite You To Family Functions Or Office Parties

If your partner doesn't ask you to be their date to the office holiday party or they're completely avoiding the conversation about going home with you for the holidays, you might be headed toward a holiday breakup. "If you’ve been dating for a while and you find that you didn’t get the invitation to the family holiday party this year, or the invite to your partner's annual office party, chances are it’s because you’re being phased out," Masini says.

2. They Didn't Think About Your Gift

Gifts have always been the number one cause of my stress during the holiday season. I'm constantly asking myself, "am I spending too much?" "Am I spending too little?" "What if they spend way more on me than I did on them?" But gifts aren't all about the money. How much thought and effort went into the gift can actually tell you a lot more about what someone thinks of you than how much they spent.

Received a thoughtless or generic gift? Masini says it could be because they didn't spend time on it, which can reflect how they're feeling about the relationship.

Fighting at any time of year can be a sign that your relationship is on the rocks, but add in the holiday season, and that argument over household chores or monthly spending can become disastrous. "You bicker more than usual as the holidays approach," Masini says. "Bickering at Christmas is a lot more volatile than bickering on Flag Day."

If this is your first holiday season together as a couple, there's probably been discussions about what traditions you celebrate or what you expect from the holidays. But if you haven't discussed whether or not you're giving each other gifts this season, that may be a bad sign for your relationship. "You don't discuss gifts for the holiday," Audrey Hope, a celebrity relationship expert, tells Bustle."You might have always discussed the joy of what you wanted for the holiday, but this time, there is no mention of it. The absence of this topic can be a sign that something is brewing and it is not going to be fun."

5. They're Spending More Time At The Office

Just because Christmas is coming, doesn't mean your career stops being important. But if your partner is staying later and later at the office, it could be a sign that they're just trying to avoid a holiday breakup. "You might hear things like, 'Wow, I am really crazy busy this holiday and I can’t seem to catch my breath,' or 'I wonder how I am going to finish all this work,'" Hope says.

While celebrating and respecting each other's various holiday traditions and religious observances is a great thing to continue a supportive relationship, a difference in how you feel about the holiday season could potentially hurt your union. "For some people, the holidays are something that they look forward to year-round, and go all out with decorations, parties, and holiday music. For others, the holidays are just something to get through, and their negativity about the season may put a damper on the other person's excitement," April Davis, a dating and relationship expert and founder of LUMA tells Bustle. "A disconnect on why the holidays are important may lead to a breakup this time of year."

7. You Aren't Included In Their Plans For The New Year

Even if you've discussed how you're both going to celebrate the holidays leading up to the end of 2016, if you don't have plans for the new year, you might be headed toward a breakup. If your partner hasn't discussed spending New Year's Eve together and talks about what they're doing with their friends instead, your relationship might be ending before the new year begins, Samantha Daniels, a relationship expert and founder of the app The Dating Lounge, tells Bustle.

Breakups already suck without the added-in stress of the holiday season. But unfortunately they happen. But even if you're headed toward a holiday breakup, just know that 2016 is almost over and you'll be able to start a new year surrounded by the family and friends who love and care about you.