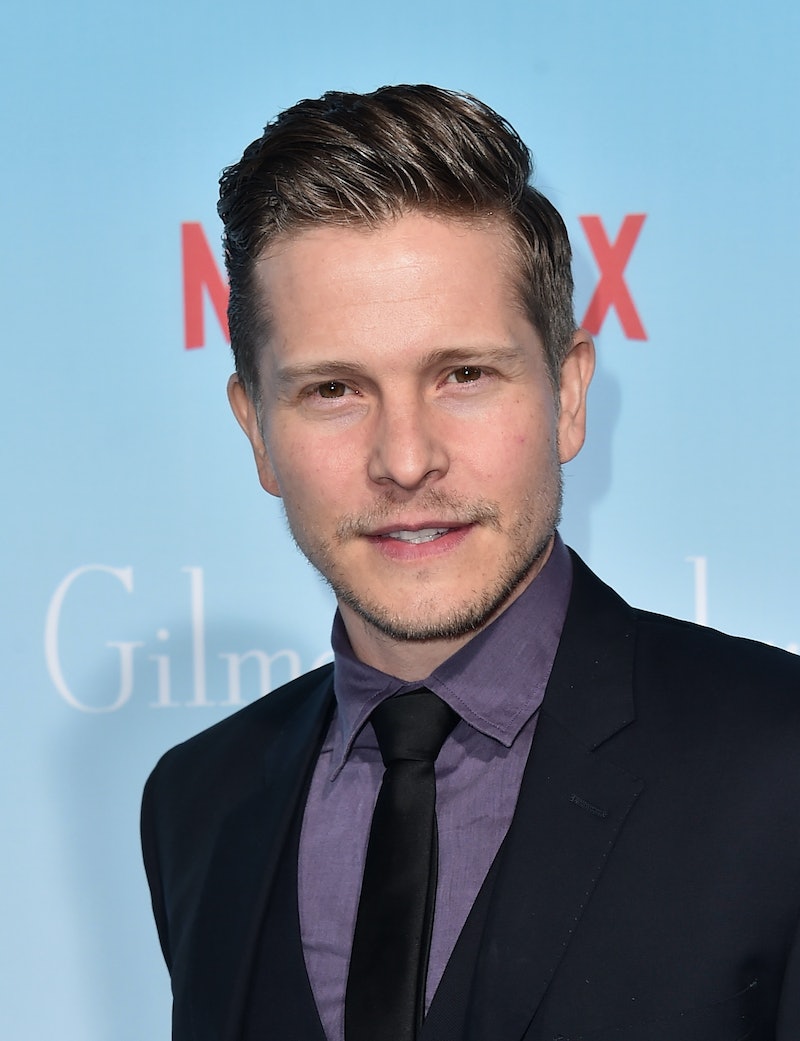 Now that I have watched Gilmore Girls: A Year In The Life at an alarming rate, I have a lot of feelings about the Gilmore women, and, naturally, all of their men. Back in the early '00s, Milo Ventimiglia's Jess Mariano was my ultimate dream babe, since, you know, he had that whole bookworm, bad boy thing going on. (And that is still my downfall. Ugh.) And while Logan Huntzberger was always a cutie, he has become a very handsome man, and I can now shamelessly add another Rory boyfriend to my crush list. Since quite a few of his cast members are taken, I wondered if Matt Czuchry is dating anyone now that he's a big-time television actor.

By all accounts, it looks like Czuchry is still single and his history shows that he isn't exactly moping about that fact. Over the past few years, especially during promo for his show The Good Wife, Czuchry asserted that he did not have a significant other, so it's safe to say he's been enjoying playing the field for a while. When looking up Czuchry's past relationships, the only name that pops up is Kate Bosworth. Bosworth and Czuchry reportedly dated from 2000 to 2002, after they co-starred in the ill fated WB show Young Americans. In 2010, the two were spotted having lunch, but they were also accompanied by Bosworth's then-boyfriend Alexander Skarsgard, so I guess things are very amicable.

Now, keep in mind that 2002 was 14 years ago, so has he dated anyone since then? He probably has, but it does not seem like Czuchry has dated anyone famous — or he is just really good at keeping things secret. To me, it sounds like he just values his privacy and old friendships. In an interview with Vulture in 2011, Czuchry was asked if he was dating anyone in particular, to which he replied, "No. I’m enjoying dating. I’m single, though, I’m not in a relationship." He also stated in the interview that he didn't keep in touch with any of his Gilmore Girls cast mates and said,

"I’m grateful that on a lot of casts I’ve gained friends for life. But it’s more of a rare thing than a normal thing. I have a small group of friends, and I just, uh, feel fulfilled by the people that are in my life."

In 2013, the actor opened up to New York Post about his love life, but it didn't sound like much was going on then, either. He said,

Beyond those tidbits, Czuchry rarely speaks about his relationships, but it sounds like it's likely that he is still single and enjoying his steady and successful career.

More like this
Jennifer Lopez & Ben Affleck’s Officiant Spilled The Tea On Their Wedding
By Sophie McEvoy
The Spice Girls Are Set To Reunite At King Charles III’s Coronation
By Sam Ramsden
Cruz Beckham Teased New Music With An Adorable Nod To Mom Victoria Beckham
By Stephanie Topacio Long
Who Is Allison Williams Dating After Her Divorce? She’s Engaged With A Child
By Jake Viswanath
Get Even More From Bustle — Sign Up For The Newsletter
From hair trends to relationship advice, our daily newsletter has everything you need to sound like a person who’s on TikTok, even if you aren’t.