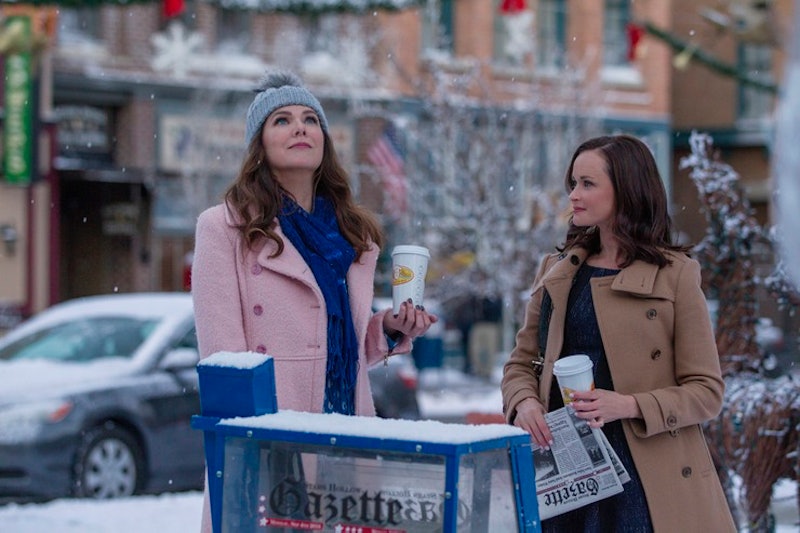 On a show that is so dedicated to telling the inter-generational and feminist story of three women, the Gilmore Girls revival absolutely nailed what it is like to grow up and remain close to your female family members. When fans rejoin the Gilmore women, each character is at a crossroads in her life. The future is bearing down on them with weighty choices to be made. Each woman — Emily, Lorelai, and Rory — is tasked with having to mediate between reality, their own desires, and what is expected of them in order to achieve the most harmonious outcome. Major Gilmore Girls spoilers ahead. In Rory's case, once the final four words are spoken, there is still a lot left to explore. Furthermore, things are decidedly not as harmonious as she once thought. Now that we know Rory pregnant and a single woman, is Rory's adult life destined to mirror Lorelai's? By the time the show's final episode ends, it certainly seems that way.

Rory spent most of the revival trying to find her footing. She was constantly running into big career bumps, crashing on the couches of her friends and family, and remaining in very close contact with Logan, despite his engagement to another woman. While Rory eventually settled in as the editor of the Stars Hollow Gazette and officially moved back in with Lorelai, it was the question of the paternity of her baby that made me realize that in many ways, Rory is unconsciously taking similar steps to Lorelai's, when it comes to romance and motherhood. In this odd mirroring of lives between mother and daughter, fans may not actually need further episodes to know what will happen to Rory in the coming years.

Sure, Rory isn't a teen mom, like Lorelai was when she fell pregnant. But ahead of Rory lies the life of a single mother, which is a life she knows well, considering her own childhood. I can't imagine that Rory would terminate her pregnancy, but I also can't imagine her having a worry-free pregnancy either. Of course, she'd think about what a baby would mean for her and would meticulously plan for how she could fit motherhood into her life. It would completely change the future she had envisioned for herself.

Furthermore, this pregnancy perpetuates the theory that Rory was always meant to take on Lorelai's life, mirror it, or experience it in a similar way, but with a different approach. If growing up the daughter of an unmarried teenage mother was the first stage, then the second is Rory taking those lessons picked up along the way and using them during her own maternal era.

Even more intriguingly, it would seem that the men in Rory's life mirror Lorelai's. If Logan was indeed the father of Rory's baby, then that would set up a curious, pseudo-Freudian mirror to Lorelai's relationship with Rory's father, Christopher. Both Logan and Christopher come from incredibly wealthy families. Their relationships with Rory and Lorelai, respectively, are based in deep love and affection, but never seemed to pan out because the Gilmore women were determined to go down their own path — if that meant going it alone, then so be it. Would Rory work something out with Logan (would Logan even remain engaged to another woman?) or would she choose to go it alone?

In this vein of old habits dying hard and history weirdly repeating itself, if Logan is Rory's version of Christopher, then Jess may very well be the equivalent of Luke. If you're Team Jess, like me, then you can make a strong argument that Rory and Jess, however short their relationship was, have a strong bond with one another. They understand one another, they support one another, and both have proven to remain patient while they figure their lives out. Would Rory end up with the man who has remained steadfastly by her side, in person and at a distance, only to end up together when the timing was right? She could do it, just as Lorelai did with Luke.

Speaking of Jess, he encouraged Rory to begin her book, which could serve as a major point of reflection on her own circumstances as she delves into the past. Rory's own recollections could help her transition into this next phase. No matter what happens, Rory definitely has a lot to chew on. She's traded in one big crossroads for another; lucky for her, she can once again lean on her mother and learn from Lorelai's past as she moves forward.