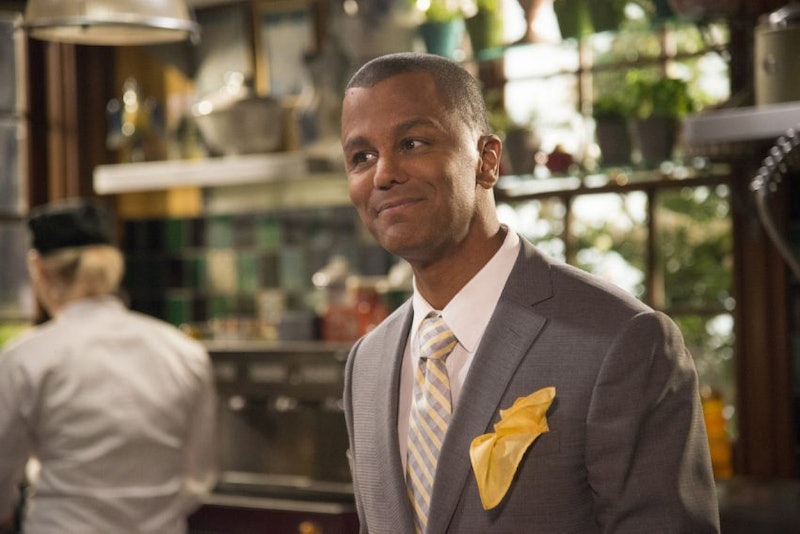 Isn't the dynamic of Lorelai and Michel, the concierge at The Dragonfly Inn, such a beautiful thing in the world of Gilmore? Spoilers ahead for A Year In The Life, dudes. In the Gilmore Girls revival, it becomes clear that Michel, despite his wonderful dynamic with Lorelai, is getting itchy feet in the small town of Stars Hollow at the same ole job. Sookie has already left the Dragonfly Inn trio, so the idea of Michel moving on is even worse news for Lorelai. The pop culture-loving lady can't bear the idea of losing the grouchy French-Canadian man she and Sookie are so "addicted" to so she looks around Stars Hollow for some real estate.

Michel admits that he would probably stick around if he got a spa to run, and an old convent that's newly on the market seems like just the ticket to facilitate the potential new facilities. Then, because time is apparently quite cyclical in the Gilmore universe, at the end of the series, in "Fall," Lorelai asks her mother for money to finance this new endeavor. And yet, we never find out if the new addition to the Dragonfly Inn would make it definite that Michel would stick around or that Lorelai can even legally get the loan — which will come from Luke's franchise inheritance money. However, according to a Business Insider interview with Yanic Truesdale, the actor who plays Michel Gerard, there was a scene cut from the final Netflix original that revealed Michel chooses to run the convent-turned-spa.

Truesdale recently discussed the scene with Business Insider, explaining that he and Lauren Graham did shoot a scene that wrapped up the whole storyline. Truesdale said: "There was this scene that got cut because the show was too long. That was a big moment for Michel and Lorelai where they go and they buy that other place to do the spa... That’s very unfortunate because that scene was very pivotal to all of that." At the time of the interview Truesdale had not seen A Year In The Life, so maybe now he's happy to see the ending as more of a will they/won't they cliffhanger.

I do have to admit, I am kind of sad I didn't get more Michel screen-time in the revival, especially because he and Lorelai going through such an intense process together, and it would be pretty awesome to see a definitive conclusion to their story. But according to Truesdale, Warner Brothers has plans to make the scene a bonus if the revival has a DVD release, so that's a lovely silver lining, isn't it?

I'm going into winter hibernation, somebody wake me up when the revival has a DVD release date.

Editor's Note: A previous version of this article incorrectly referred to the "Dragonfly Inn" as the "Firefly Inn." It has since been corrected.