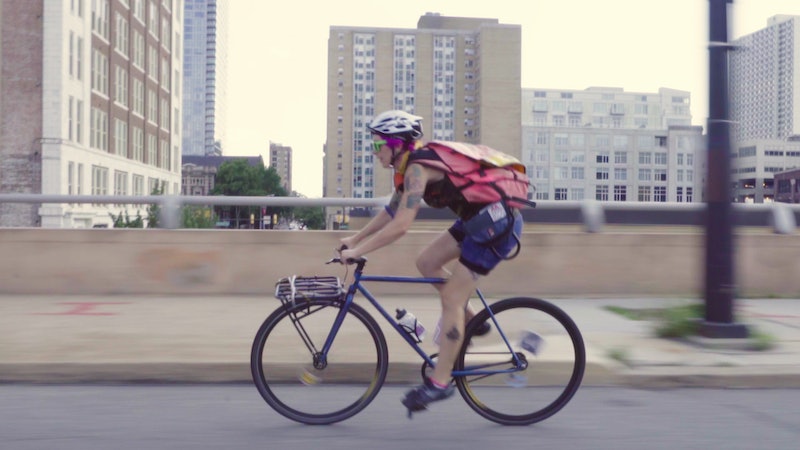 Most women understand what it’s like to walk down the street and suddenly get that nervous feeling in the pit of your stomach: you have to walk through a group of men. Sometimes it happens more suddenly — you get the drive-by insult hurled from a car window, or the “compliment” hissed in your ear as you walk by. Whether you have time to steel yourself or not, street harassment is a constant for many people.

Imagine what it’s like for someone whose job takes place primarily outside, on the streets. For the latest installment of the docuseries NSFWomen, Bustle spent time with four female cyclists in Philadelphia for whom street harassment definitely isn’t a compliment.

Cyclists experience harassment no matter their gender: they're yelled at by drivers and pedestrians, and they’re frequently injured. But for bike messengers and commuting cyclists who identify as female, harassment is an added danger. For these women, sexual harassment makes their routes even riskier.

Larkin Silverman, 30, lives in Philly and commutes to work on her bike. Last May, she and a co worker were biking in downtown Philadelphia when she realized a car was too close to the bike lane where she was riding. “My first thought was that I was about to be hit, so I sort of braced up my body and was trying to get my hands to my brakes, “ Silverman. “I heard all this laughter and all this commotion, and a male passenger from the rear passenger seat was leaning out the window so he could grab me. So, I got fondled. I got groped.”

Silverman isn’t alone — harassment and safety concerns often deter women from riding bicycles. In the Women’s National Cycling Survey, 13 percent of those surveyed said that “stranger attacks” were a worry for them. For messenger Liza De Prophetis, harassment was a factor in her quitting the profession all together.

She was a messenger for more than eight years in San Francisco and Philadelphia. “After so many years, I just felt so angry all the time," De Prophetis tells Bustle. "And I was like, ‘I don't like feeling this way.’ ” Like Silverman, De Prophetis was also groped by a man in a passing car, and was threatened with rape while on a delivery.

“I think over the years I've tried to find the best response to cat calls, and I haven't ever found something that really works,” De Prophetis tells Bustle. “It's hard — especially when you're just riding -- to think of something quick to say. Some guys actually get really offended that I'm not taking the compliment.”

Though most women haven't found a good way to respond to catcalling, messenger Jess Craine feels confident in her method. “I usually say things back,” Craine tells Bustle. “If some guy is yelling at me from a car, I'll spit on his car, and then I zip away.” Craine has been a courier for four years and has witnessed what happens to messengers on the streets.

“Everyone that I work with has been run off, almost hit, hit on purpose, yelled at, been called names, harassed, on a daily basis. I think that happens to all cyclists every day, but women get hollered at because they seem lesser to some people — mainly misogynists in cars.”

Bike messenger Stacy Grimes knows men and women have to approach this job very differently. She has to think twice about taking a delivery in certain neighborhoods or places where she feels unsafe, while a male messenger wouldn’t. “It sucks that we have to think those things,” says Grimes tells Bustle. “Guys don't normally have to think about that when they go into a neighborhood. They don't have to experience that fear, or inferiority.”

There’s no question that street harassment is frustrating and demeaning, no matter your profession. The women Bustle spoke with were resigned to the fact that sexual harassment is a part of their lives as cyclists, but wished it could be different. “I'm just trying to work, just like you're trying to work,” says Grimes. “This is what I do for a living. Just because I have boobs doesn't mean that I want you to invade my space.”