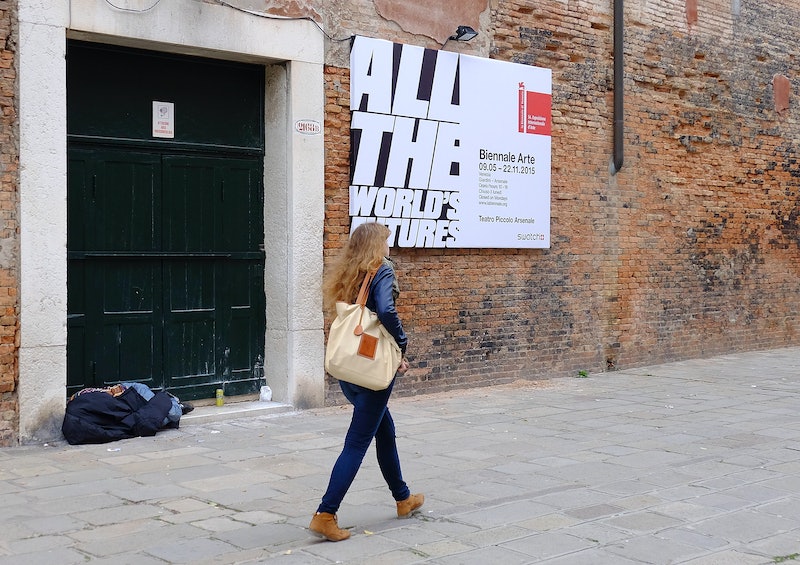 Sexual harassment is something that women in particular are all too familiar with, but a new study shows that some men experience street harassment as well. But before the Men's Rights Activists get their panties in a bunch, it should be pointed out that the most common form of street harassment men in the study experienced was homophobic or transphobic slurs. Not, you know, harassment because they happen to be men.

The survey, which was conducted by the organization Stop Street Harassment and the market research firm GfK, show that 65 percent of women have experienced some form of street harassment, as opposed to only 25 percent of men. For women, the most common form of harassment was catcalls and verbal harassment, though 41 percent of women had also experienced physically aggressive harassment, such as being followed. Most women who had been harassed on the street reported that it had occurred more than once, and that they had experienced at least one instance of it by the age of 17.

Among men, the numbers are all much lower, in some cases ridiculously so. While 51 percent of women have received not explicitly threatening catcalls like "Give us a smile," only six percent of men can say the same. Almost a quarter of all women have had someone touch them in an unwelcome, sexual way on the street or in other public places, while fewer than a tenth of all men have had the pleasure. In fact, the only form of harassment men receive more than women, it seems, are homophobic and transphobic slurs, which nine percent of men have experienced, compared to only three percent of women.

So what does all this mean? Well, from where I'm standing, it says pretty clearly that catcalls and other forms of street harassment aren't about compliments; they're about power. Because it's telling that the majority of men have never had random people on the street interrupt their daily lives in order to shout things — but it's even more telling that most men who have had that experience have been singled out because their appearance suggests an LGBT identity. In other words, street harassment isn't a compliment, but a way of exerting power over less privileged groups.

This is backed up by another finding from the study: that both men and women of color are far more likely to experience street harassment than their white counterparts. Black women in particular are frequent targets, the study found, though Latina women still are significantly more likely than white women to be harassed as well.

And all of this is important, because even though so many men argue that catcalls are compliments, this study also revealed that two thirds of people who experienced verbal harassment were afraid that things would escalate. In other words, it made them feel unsafe. Just what every woman loves. Because honestly, if catcalls are such a great compliment, then why do most harassed people change their behavior in order to prevent it?

This study drives home a lot of points that women have been making about street harassment for a long time, and a lot of its findings are about what you'd expect. And the biggest non-surprise of all: the vast majority of street harassers are white men. Power and privilege, guys. That's all I'm saying.