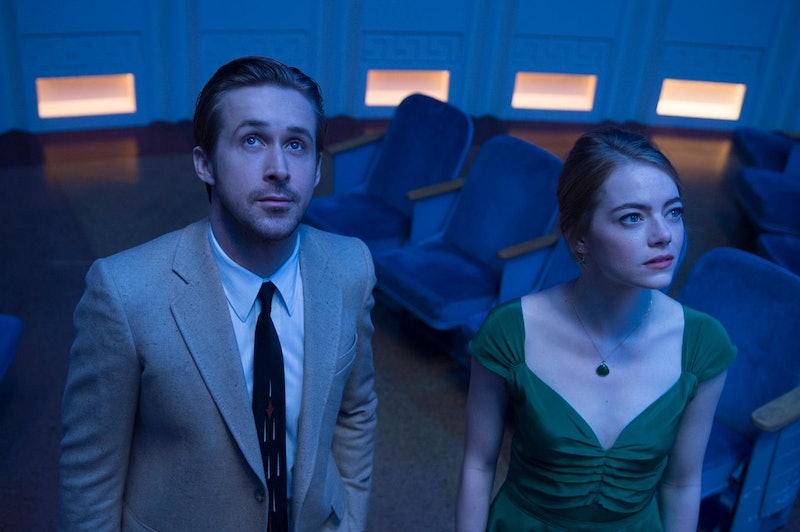 The prestige picture game has officially amped up in the final stretch of the year, as the superstar team of Ryan Gosling, Emma Stone, and Whiplash director Damien Chazelle release their vibrant, cinematic musical La La Land. The film has received enormous praise already from its time on the festival circuit, with its premise that fuses the classic and the modern with care, passion, and artistic energy. The setting is contemporary Hollywood, but the main characters, both struggling performers played by Gosling and Stone, break into song and dance with the sort of verve and chemistry that have sparked comparisons to Fred and Ginger. Stone shows off a fantastic singing voice and great dancing skills, while Gosling's musician character also plays a mean jazz piano. Is it all movie magic, or can Ryan Gosling really play piano like that?

As it turns out, Gosling, in addition to being everybody's best boyfriend, is also a major triple threat when it comes to music. By now, I'm sure you know that the star had an auspicious start in music as a bona fide member of the Mickey Mouse Club, along with such greats as Justin Timberlake, Britney Spears, JC Chasez, and Christina Aguilera. In the Mickey Mouse Club, a young Gosling showed off his musical chops crooning the hits of the day dressed in oversized club wear. Catch him in action (Gosling comes in at 1:30) belting Jodeci's "Cry For You" in the video below, flanked by Timberlake, Chasez, and Dale Godboldo.

Gosling has been musically inclined since prepubescence, so it's no surprise then that alongside a career as an A-list actor, he's kept up with the passion and has continued making music. In 2009, Gosling recorded an album with his friend, musician Zach Shields, under the band name Dead Man's Bones, that got positive recognition from the rock and indie scene, even earning a respectable 7.1 rating from Pitchfork. According to Allmusic.com, Shields and Gosling taught themselves many of the instruments they played on the record, and based on the video below of Gosling playing piano on the track "In the Room Where You Sleep," he learned pretty well.

So it shouldn't come as a huge surprise that for La La Land, Gosling committed to the musical elements, especially the piano. Expert jazz piano is a far cry from the work he was doing in Dead Man's Bones and at The Mill Valley Film Festival, La La Land's composer Justin Hurwitz broke down how the film tackled Gosling's piano parts. "Ryan was in piano lessons six days a week for two hours a day," he said, to learn the piano parts, which were prerecorded by jazz musician Randy Kerber. According to Hurwitz, Gosling learned "every note of it," so "everything you see in the movie is Ryan," with no hand doubles and no CGI.

In a featurette about the film, director Chazelle expands, noting that he intentionally filmed long takes of Gosling playing piano and avoided distracting editing. “We were not going to chop up, we were going to film in long takes proving that it was in fact him playing piano," he said. And Gosling, for his part, humbly brushes past his Dead Man's Bones days in saying how eager he was to learn the parts, as "piano is always something I wished I had the time to learn."

So when you go to see La La Land in theaters, you can be sure that the ivories you're seeing are being tickled by no one's hands other than Gosling's. And hey, maybe his character will break out some classic Jodeci, too.