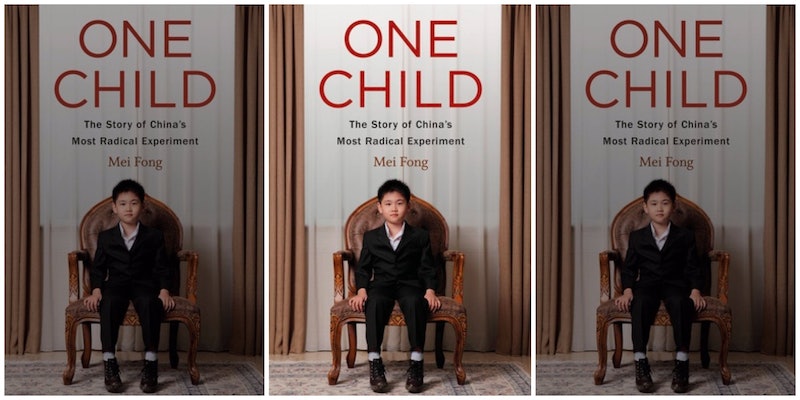 Unable to find a publisher in the region, a Pulitzer winner is offering her book for free in China, Hong Kong, and Taiwan. Readers can download a .PDF of the Chinese-language version of journalist Mei Fong's book, One Child: The Story of China's Most Radical Experiment, for free, and Fong is currently accepting Patreon donations to offset her distribution costs. As of this writing, Fong has raised $153 USD of an initial $10,000 goal.

Fong's book explores the legacy of China's infamous one-child policy, which attempted to combat over-population by limiting Han Chinese couples — members of the country's ethnic majority — to a single offspring. In spite of its exceptions, which allowed families to have a second child under certain circumstances, the one-child policy garnered a nefarious reputation as stories of massive fines, undocumented children, sex-selective terminations, forced abortions and sterilizations, and strained adoption facilities poured out of the country. China formally abandoned the one-child policy in 2015, and replacement legislation allowing families to have two children went into effect on Jan. 1, 2016.

In spite of the fact that China has now renounced its family-planning law, Fong was unable to find a publisher in China, Hong Kong, or Taiwan. The Chinese book industry's reluctance to accept One Child is likely due to recent crackdowns on the press, including the disappearance of five bookstore employees, who many believe were abducted by the Chinese government as punishment for distributing dissenting literature.

Fear of retribution from the state has impacted individuals and organizations at all levels of the Chinese book industry. Officials are now confiscating books at the border of China and Hong Kong, causing publishers and booksellers to lose out on their investments. In addition to profits lost from seized literature, Hong Kong bookstores are also missing out on valuable foot-traffic, as customers realize the books they want are now largely unavailable.

The current climate has made it difficult for anyone to publish literature that the Chinese government may deem undesirable. Quartz reports:

Renee Chiang of New Century Press, a Hong Kong publishing house that specializes in Chinese language political books, echoed those woes. “Now, we find ourselves unable to print books, since the printers will not take orders for politically sensitive books… all across the book industry things have changed a lot. Bookshops have closed down, and those that remain are not willing to have political books on their shelves.”

As it stands, China may officially block access to the One Child .PDF. Until they do, however, Fong is determined to keep the book online. To support her efforts, purchase the English translation of One Child, or donate to her Patreon.

More like this
How To Stream 'She Said' In The UK
By Maxine Harrison
Where Is John Leonard Now After Suing Pepsi For A Harrier Jet?
By Brad Witter
James Colthurst Described His Last Call With Princess Diana Before Her Death
By Brad Witter
'Bridgerton' S3 Teases Exciting Social Season For Penelope Featherington
By Bustle
Get Even More From Bustle — Sign Up For The Newsletter