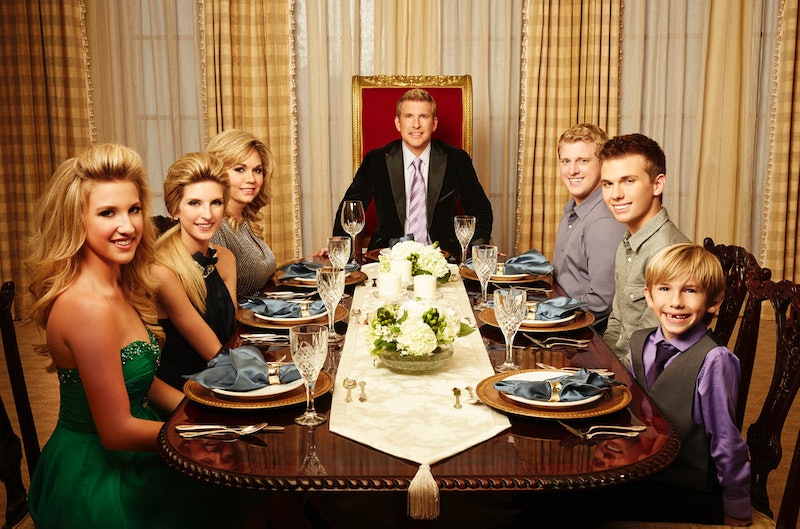 USA, your favorite network for one-word occupational dramedies about bros, has branched into reality programming — oh boy, have they ever. Chrisley Knows Best centers on a father of five, Todd Chrisley, a self-made millionaire from Atlanta with a flamboyant personality and face you could bounce a quarter off of. Try as you may, you will never get past that he looks exactly like you did a face-meld of Bravo’s Jeff Lewis and Nick Swardson, but kept only Lewis’ personality.

I have read exactly one book about sociopaths. That book told me that 1 in every 25 people are sociopaths. (Seriously, look around you, there’s probably a sociopath nearby — it’s terrifying, and maybe not based in facts). If you put the Chrisley family of seven into a room full of 100 people, there would be exactly four sociopaths, and half of them would be Chrisleys (that littlest one has a crazy look in his eye). Todd Chrisley has a funny, over the top, almost charming personality, yes. But he also cares about the comfort, happiness and confidence of exactly one person: himself. He’s mean and he’s self-centered, all under the guide of “being honest.” Sound like any other reality stars you’ve watched in apt horror recently?

I wanted to find Chrisley Knows Best to be a fun lark; just a bunch of wealthy people making a mockery of themselves to make us normals feel better about our non-rich lives. But this is not a guilty pleasure, nor does in contain the earnestness of a crazy-but-loving family like Here Comes Honey Boo Boo. It does, however, scratch that itch of knowing you’re watching something with truly uncomfortable themes bubbling just under its botoxed surface — you know, if you’re into that sort of thing. If Juan Pablo cleared out a masochistic little gap in your TV schedule that you’re looking to fill with some narcissism and the vague, but haunting feeling that something isn’t right, then Chrisley Knows Best just might be the highly stylized reality show you’re looking for.

The sitcom trope of a bumbling, but well intentioned father who only wants what’s best for his kids is a classic one. Juan Pablo even fulfilled it a little by getting away with just about everything in the eyes of his would-be girlfriends because he was a doting father. But Todd Chrisley takes it a step further by being bumbling, embarrassing, and strict, all without really seeming to care how it effects his children’s development, as long as it’s what he wants.

Chrisley rules with a daintily clasped iron fist, but he doesn’t really seem to care what he teaches his children by “protecting” them. Boys are treated as uncontrollable hellions, bent on having sex with everything that moves. Girls are mostly valued for their beauty, and then told it will inevitably get them into trouble. In fact everything will get everybody in trouble unless it is exactly what Todd Chrisley wants.

It’s the non-competition reality show equivalent of “I didn’t come here to make friends” —a catchall for being a terrible person. And like Juan Pablo before him, Todd isn’t just brutally honest to strangers. He’s either intentionally or thoughtlessly cruel to everyone in his family under the guise of trying to help them or just being your average metrosexual hoot. Of the department store he’s opening, Todd says he’d rather not carry any of those unmentionable sizes not between a four and a six… while sitting next to his wife who is clearly somewhere around an apparently revolting (according to Chrisley) size 10.

Just ignore the huge dark elephants in the room, while the producers flash them in your face over and over

Reality shows are not filmed in a vacuum. We consume as much of their characters’ actual reality in magazines and headlines as we do in the manufactured reality featured of their prime time slots. So, if Juan Pablo is going around saying he’s a loving guy, but the producers of his show are doing everything they can to show me each and every way he’s screwed over his 18 girlfriends, what am I to believe? And if Todd Chrisley continually turns down allegations about his sexuality or that he is totally bankrupt beyond repair, but the people behind his show dwell on lines where he brags about spending $300,000 on clothes, or allow the lengthiest of edited pauses after telling his wife, “I don’t even want to have sex anymore ... [longest pause known to man] ... because I’m afraid we’ll procreate again,” well, what are we to think? What are they asking us to think? If nothing else, Chrisley Knows Best certainly gives you plenty to think about.

More like this
Kourtney Kardashian & Travis Barker Are Married – Officially
By Sophie McEvoy
Sam Ryder Is Ignoring The Eurovision Hype, Too
By El Hunt
What’s New On Netflix: 'Stranger Things' & 'Somebody Feed Phil' Return
By Arya Roshanian
What’s New On Netflix: A Victoria Justice Rom-Com & The Return Of David Letterman
By Arya Roshanian
Get Even More From Bustle — Sign Up For The Newsletter