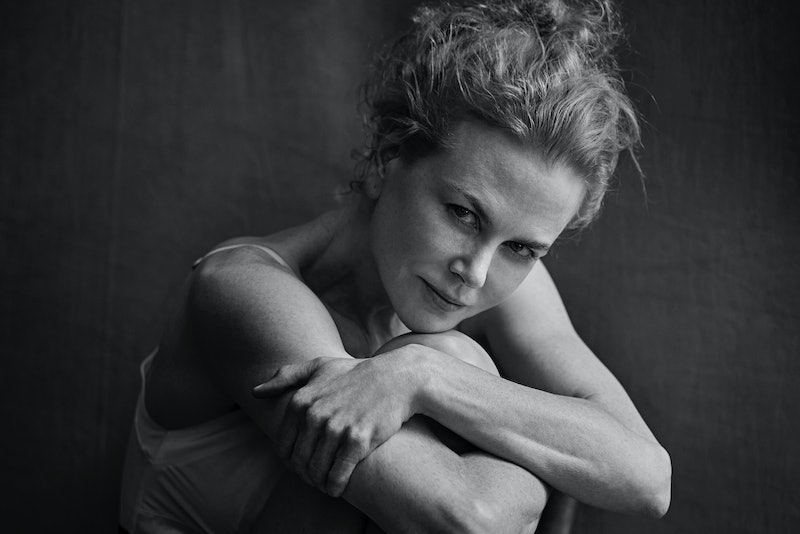 The Pirelli Calendar is finally here, and it's spreading some seriously positive messages. Each year people wait to see what images will be included, but this time around it's even better than usual. The 2017 Pirelli Calendar is completely un-retouched, and that's not the only reason to give this shoot a look either. The powerful message behind the calendar's images make this edition one of the most special yet.

While the Pirelli Calendar was once a photoshoot dedicated to traditionally "sexy" images, the message has changed a bit over the years. For 2017, photographer Peter Lindbergh got 14 groundbreaking women together and shot them wearing little to no makeup. He then took it a step further and left all of the images un-retouched.

The title of the calendar is "Emotional," so it makes sense that Lindbergh decided to go the "raw and real" route with his imagery. “In a time when women are represented in the media and everywhere else, as ambassadors of perfection and youth, I thought it was important to remind everyone that there is a different beauty, more real and truthful and not manipulated by commercial or any other interests, a beauty which speaks about individuality, courage to be yourself and your own private sensibility," he said.

“My aim was to portray women in a different way," said Lindbergh in the press release. “And I did it by calling in actresses who’ve played an important role in my life, getting as close as possible to them to take my photos. As an artist, I feel I’m responsible for freeing women from the idea of eternal youth and perfection. The ideal of perfect beauty promoted by society is something that simply can’t be attained.”

This isn't the first Pirelli Calender that opted for a powerful message either. Last year Photographer Annie Leibovitz chose to go the unconventional route with the images as well, the most memorable of which was Amy Schumer drinking coffee in a pair of underwear and heels.

Personally, I love that another photographer has decided to take an unconventional and awesome spin on the Pirelli Calendar. I'm not the only one who thinks so either.

The images are absolutely gorgeous.

People are absolutely loving the photos.

If this is a sign as to what 2017 will bring, it's looking pretty good!