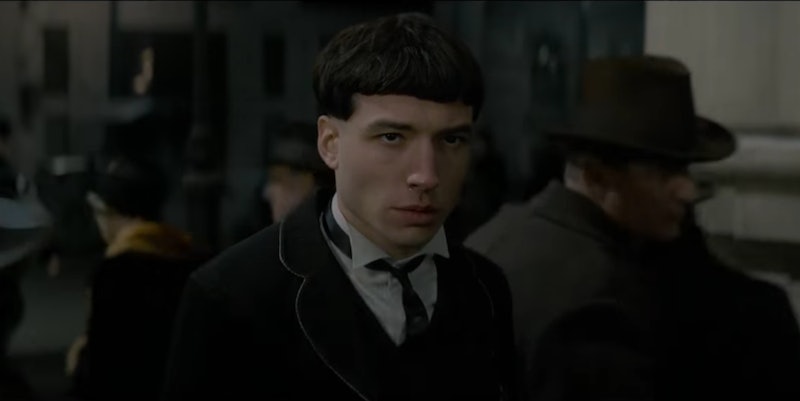 Voldemort does not appear in Fantastic Beasts and Where to Find Them. In fact, he isn't even born when the movie takes place (in November of 1926). But any Harry Potter fan knows that He Who Must Not Be Named looms large over the new prequel series, particularly in the characters of Gellert Grindelwald, the dark wizard on the rise who believes that wizards should rule over Muggles, and Credence, a young — spoiler alert — repressed wizard who wields tremendous, but slightly uncontrollable, power as an obscurus. As the most mysterious character introduced in Fantastic Beasts, Credence has been the subject of many fan theories, the most prominent of which is that Credence is related to Voldemort.

They Could Be Twins

Either J.K. Rowling is obsessed with skinny, pale men with dark hair (entirely possible), or there's a reason Credence strongly resembles both Harry Potter and a young Tom Riddle. Now, family resemblance might not mean much if we theorize that Credence is Voldemort's long lost cousin, but, hey, it's something.

In Fantastic Beasts, Credence is an orphan, adopted by Mary Lou Barebone, a strict, anti-magic activist. Later in the film, when Credence and Mary Lou finally come to blows, she hints that his mother was a witch. How she knows this, I have no idea, but her insinuation coupled with Graves/Grindelwald's later assumption that Credence is a squib suggests that Credence does, indeed, come from a wizarding family. If Credence is related to Voldemort, it means he is connected to some of the most powerful pure-blood families in Britain, which might explain how he has defied the odds as an obscurus.

Credence is an extremely powerful wizard and he just can't control his own power, hence the obscurus. His power and his mysterious wizard bloodline (see next clue) could be a sign that he is related to the same pure-blood families as Voldemort — who traced his ancestry back to Cadmus Peverell and Salazar Slytherin.

Credence appears to die at the end of Fantastic Beasts. However, producer David Heyman essentially confirmed that Credence survived in an interview with Cinemablend, when he revealed that they had shot an extra scene of Credence getting on a boat and leaving New York City. If Credence is alive, his brief death might later attract the attention of a young Voldemort. In fact, he could be what inspires Voldemort to cheat death using Horcruxes. Another theory, put forth by Vanity Fair , suggests that Credence's essence — his soul — which explodes at the end of Fantastic Beasts, could end up in Voldemort's body when he is born. Voldemort, then, would be a kind of Hocrux himself.

So, what does Credence himself, Ezra Miller have to say about all these theories? Well, he's just as invested as fans are. "I don't know anything. Nobody knows anything. Except for J.K. Rowling, who knows everything," Miller told Nerdist. At the end of the day, we probably won't find out whether or not Credence is related to Voldemort for a while. But, at least we have the comfort of knowing that answers are coming.