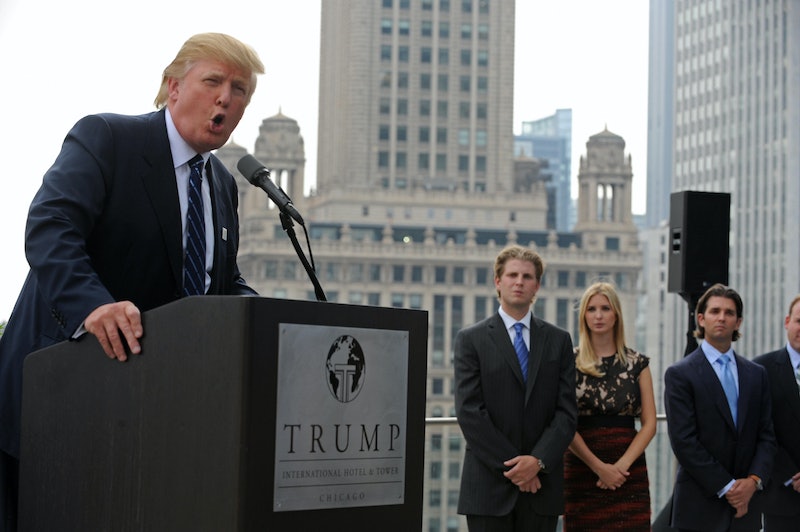 In the three weeks since Donald Trump was elected president, many of us have scrambled to try to anticipate what his presidency will actually be like. To me, it's increasingly clear that a major part of a Trump presidency will be the potential conflicts of interest with the Trump business empire. Thus far, Trump has shown little interest in divesting himself from his businesses, proudly telling the New York Times "the president can’t have a conflict of interest."

However, Trump's continued involvement in his business ventures, especially in those abroad, could cause several serious problems. For one, receiving payments from foreign countries violates the "emoluments clause" of the Constitution, which is meant to stop U.S. officials from being bribed by foreign states. With Trump's hands still in his business, there's feat that his properties could become bargaining chips in international negotiations — and that his personal interests could supersede national interest.

Of course, Trump repeatedly attacked Hillary Clinton for her potential conflict of interest with the Clinton Foundation, calling her corrupt and "crooked." Trump diving headfirst into conflict of interests would be a pretty big betrayal of a campaign theme. Then again, vowing to "lock her up" was another major theme, and Trump's flipped on his desire to pursue a criminal probe against Clinton (not that he could order that).

The media has kicked into overdrive reporting on the potential problems that come from Trump's business ties while running the country. The New York Times sent investigative reporters all over the globe to put together an extensive examination of Trump's properties in foreign countries and the legal issues many have before foreign governments. The Washington Post covered the rush of foreign diplomats staying at Trump's hotel in Washington D.C, in the hopes of influencing the president-elect.

But Trump has mostly denied that there is any problem with this:

And now he's putting foreign governments' money where his mouth is. Politico reported Tuesday that on Dec. 7, Bahrain will host a national celebration at Trump's hotel in Washington D.C. Celebrating the anniversary of King Hamad Bin Isa Al Khalif's ascension to the throne, the event means a foreign government will be paying money directly to a Trump business to host its ambassador, much of its diplomatic staff, and presumably, guests of the country's government.

We do not know what the Bahraini government is paying. Trump still refuses to release any information on his finances. But we know that Bahrain's interests with the U.S. government are not small — the U.S Navy's Fifth Fleet is stationed in Bahrain, where it is used to monitor the Persian Gulf. According to the State Department, the US and Bahrain shares over $2 billion in bilateral trade due to a free trade agreement signed in 2006.

Trump has promised as president to roll back American troops stationed abroad and renegotiate trade agreements. It will be impossible to tell how much Bahrain's place in these negotiations will be affected by them putting money directly into the president's pockets. And the most worrying thing is that the president-elect doesn't seem to care.