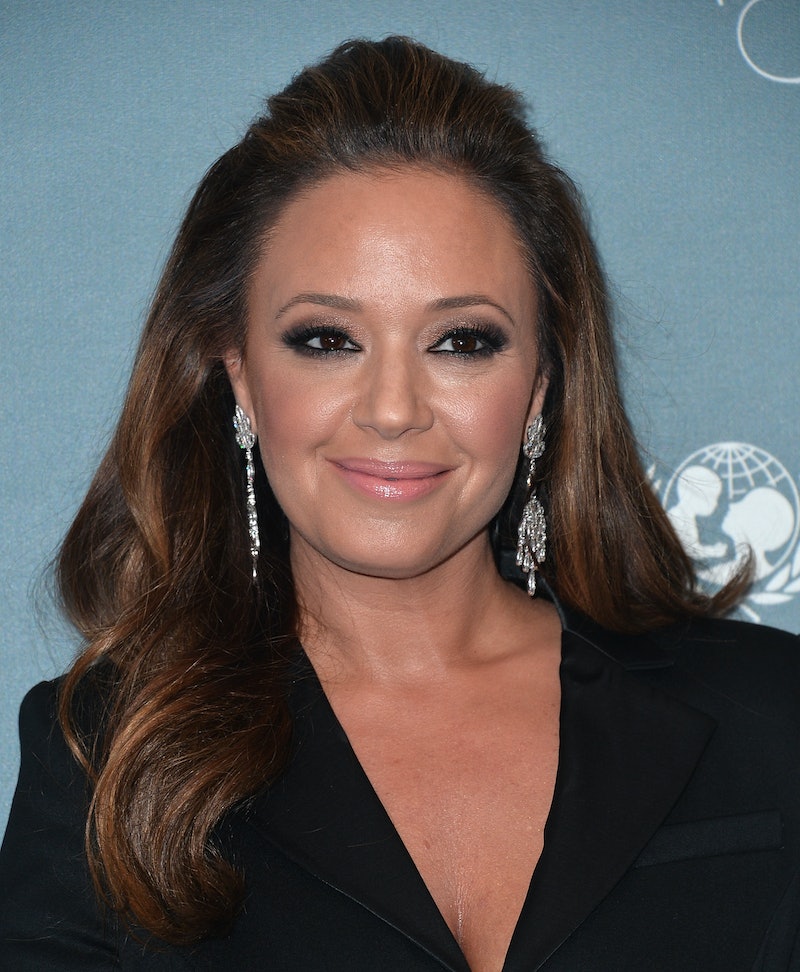 I know as much about Scientology as your average person — Tom Cruise loves it, John Travolta loves it, and Scientologists sign a billion-year contract as a symbol of their planned efforts to better the world. Leah Remini, star of King Of Queens and a few other shows, was a Scientologist up until the mid 2010s, when she left the religion. Now she frequently talks about her time in the religion both in interviews and on television. Leah Remini’s Scientology docuseries on A&E, premiering Tuesday, explores one controversial practice of the church: The religion sometimes separates people from their families in a practice called Disconnection. As seen in the documentary, Scientology gave the following statement about it: "The Church disputes many of the statements made by those appearing in this program." In a lengthy statement to Bustle, the Church again took several issues with the series. You can read the full statement here.

According to the Scientology website, Disconnection is practiced to help its members avoid "suppressive people" or people who are "antagonistic to Scientology or its tenets." The website claims that it doesn't require families to be separated.

There is no Scientology Disconnection policy that requires Church members to disconnect from anyone, let alone family and friends who simply have different beliefs. To the contrary, the moral code of Scientology mandates that Scientologists respect the religious beliefs of others. The Church encourages excellent family relationships, Scientologists or not, and family relations routinely improve with Scientology because the Scientologist learns how to increase communication and resolve any problems that may have previously existed.

These claims were reiterated in the Church's statement to Bustle, which can be viewed below.

Because Scientology is a new religion, Scientologists often have family members who are not Scientologists and who may practice the family’s traditional faith or no faith at all. This causes no conflict for Scientologists. Scientologists do not “disconnect” from family members, or from anyone else for that matter, because of a difference of beliefs. One disconnects when he or she decides not to communicate with a hostile individual who is attacking one personally, one’s way of life or one’s beliefs. These kinds of choices are made routinely in everyday life and are not unique to Scientology.

But, things don't always work that smoothly. As seen in the series family members can be labeled as SPs (suppressive people). Because there are so many family units within the church, families can get torn apart as members come and go or become SPs. As seen in the doc, Amy Scobee, a high-ranking Sea Org (the Vatican of Scientology) member until she left in the mid-2000s, joined Sea Org in her early teens without the permission of her parents. And, basically, when she signed that billion-year contract, her parents had no more rights over her. You can be 12, but in the eyes of the church, you’re seen as an adult. Amy claims she was cut off from her family, especially her mother, Bonny. (Reps for the church claim that Amy is a "discredited source." You can read the church's full statement about her claims here.)

When Amy left Scientology, she went to Bonny, who was then married to someone in the church. According to Bonny, Scientology encouraged Bonny to disconnect with her daughter because she'd left the church, and Bonny obliged. But not for long — eventually, she came back to her daughter, and the two were as close as close can be until Bonny’s death from cancer. In the docuseries, Mike Rinder, a former spokesman for Scientology, claimed that that Amy and Bonny’s reconciliation is an exceptional case. According to him, it doesn’t usually happen that families mend back together. He himself has two daughters in Scientology still (he has left the church), and he has vowed to do whatever it takes to get them to leave the religion. In a statement to Bustle, the Church refuted Rinder's statement.

Contrary to the inaccurate conclusions of Mike Rinder, reconciliation of families is far and away the norm. There are thousands and thousands of families whose relationships have been improved by Scientology. You can see a few testimonials on our website at http://www.scientology.org/videos/meet-a-scientologist/occupation/family.html. Scientology religious doctrine concerning Suppressive Persons is fully explained in the FAQs on our website. Please see http://www.scientologynews.org/faq/what-is-suppressive-person.html. We do not believe there are many such people. Man is basically good.

When it comes to Scientology, I knew about SPs and the like, but I guess I never realized how many families can be torn apart because of the religion. Scientology is not exactly known for wanting its secrets to get out, so I have to think it's extremely brave for people like Rinder, Remini, and Scobee to leave the Church, tell their stories, and fight to reconnect with their families. Their quest for family unity overrides all potential struggles ahead.