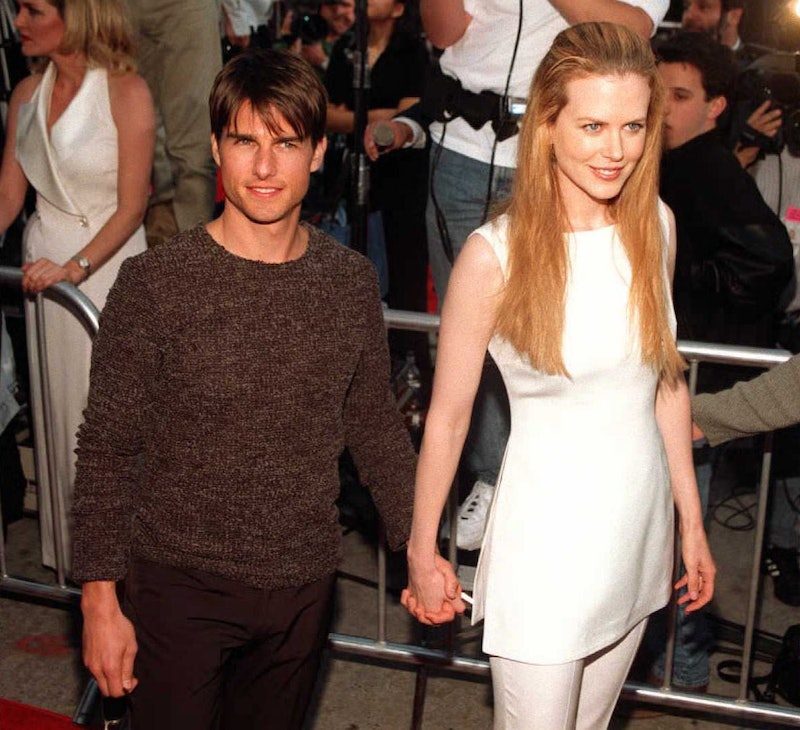 Because it happened long before we discovered the wealth of information available on the internet and social media, Tom Cruise and Nicole Kidman's 2001 divorce wasn't exactly awash in public details. Sure, there were tabloid-perpetuated whispers that the Church of Scientology broke Cruise and Kidman up, but that was an easy enough assumption considering that the de facto spokes-celeb for the Church married a woman who was raised strictly Catholic, and still is Catholic, according to the BBC. In HBO's Scientology documentary Going Clear , Cruise and Kidman's divorce is blown up to greater proportions and the claims are pretty wild.

Not only does the doc show video of Cruise's supposedly-Scientology-sponsored birthday bashes, make claims about the Church setting him up with a girlfriend, and state how integral his fame is to the Church's success, it attempts to present details into the why behind the famous celebrity divorce.

While some of these claims would have been easy enough to guess on our own (Kidman's father, the late Anthony Kidman, was a famous psychologist, and this allegedly made the head honchos at the Church uneasy) a few were only whispers from tabloids until HBO broadcast them on Sunday night. The Church maintains that the doc is false, releasing this statement:

While many people have gotten over the breakup (especially considering how big of a deal Cruise and Katie Holmes' far more recent divorce was), these supposed details are nothing less than eye-opening.

Claim 1: Nicole Was Labeled A "Suppressive Person" or "SP"

This, per the documentary, is one of the ways in which the church turned Cruise against Kidman, by placing her in this category. According the the Scientology website, a suppressive person is defined as such:

A Suppressive Person (SP) is a person who seeks to suppress other people in their vicinity. A Suppressive Person will goof up or vilify any effort to help anybody and particularly knife with violence anything calculated to make human beings more powerful or more intelligent.

The Suppressive Person is also known as the Anti-Social Personality. Within this category one finds Napoleon, Hitler, the unrepentant killer and the drug lord. But if such are easily spotted, if only from the bodies they leave in their wake, Anti-Social Personalities also commonly exist in current life and often go undetected.

According to the doc, Kidman was a member of this category — on part with Hitler, per the Church's own definition — and thus threatened Cruise's participation in the church.

In the doc, Mark “Marty” Rathbun who once worked for church head David Miscavige, says that in order to ensure a breakup, Kidman's phone was tapped. Kidman refused to comment for the doc, so she was unable to confirm this, and Rathbun is unable to confirm that any information from the alleged tapping was used against Kidman, but it's a chilling suggestion at the very least.

Claim 3: Their Kids Were Turned Against Nicole

Rathbun says that he believes the Church "brainwashed" the Cruise-Kidman children, Connor and Isabella, to stand against Nicole. If true, this detail adds yet another layer to this intriguing story, however Connor recently told Women's Day Australia that he and his mother are "solid," saying "I'll always love my mum," so it would seem that Kidman's bond with the children is in tact.

More like this
Rebekah Vardy & Coleen Rooney’s Trial Has Officially Begun
By Bustle UK
Taylor Swift, Kerry Washington & More Speak Out On Uvalde Mass Shooting
By Jake Viswanath
Twitter Was Saying The Same Thing About Sam Ryder’s Surprising Eurovision Result
By El Hunt
President Zelensky Spoke Out On Ukraine's Chances Of Hosting Eurovision Next Year
By Sam Ramsden
Get Even More From Bustle — Sign Up For The Newsletter