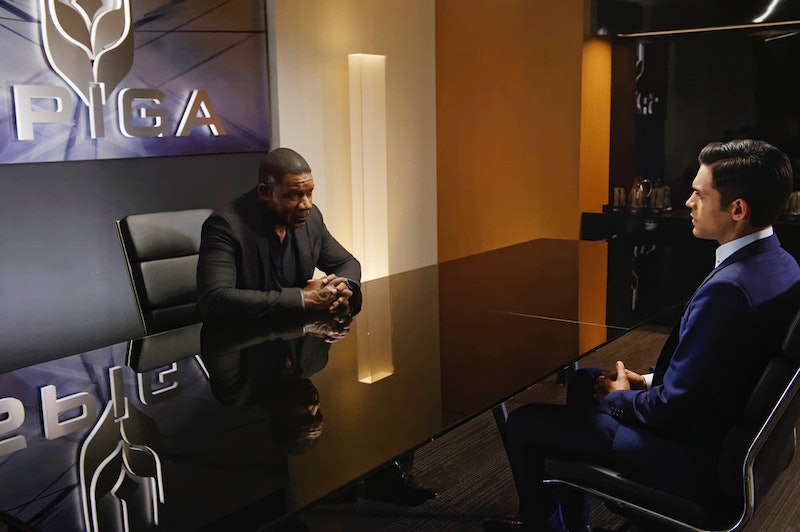 Terrifying, tyrannic corporations are hardly a new concept in science fiction, but that doesn’t suppress the lurking panic that something just as evil could sprout up and overtake our current marketplace. One of Hollywood’s most famous duos, Matt Damon and Ben Affleck, are dredging up that maybe-not-so-distant fear for Incorporated, their new Syfy drama premiering on Nov. 30. At the heart of the show is an oppressive, all-powerful company so wicked that viewers will definitely be wondering, is Incorporated’s Spiga Biotech real?

That answer is a firm no. The series is set in the far-off year of 2074, and it doesn’t seem to be based on any modern corporate empires. Instead, it harps on the familiar theme of technophobia and the dystopian danger of letting control slip into ill-fated hands. Sean Teale (Reign) stars as Ben Larson, a young executive who infiltrates Spiga in order to beat the system and save the woman he loves, though it already sounds like he’s up against a daunting, ominous beast. “Spiga biotech is a generous mother. It will feed you, dress you, protect you,” an eerie voiceover rings out over menacing bass in the trailer. “All it asks in exchange is hard work and loyalty.”

Spiga follows in the footsteps of many nefarious, fictional companies before it. Just look to the sinister Dyad Institute that’s long wreaked havoc on Orphan Black or Westworld ’s Delos, the ultra secretive organization running its android theme park. Further back, there’s DC Comics' LexCorp, helmed by the ruthless Lex Luthor, and, of course, the Alien franchise’s Weyland-Yutani, perhaps the gold standard of villainous megacorps. In fact, you’d be hard pressed to find a truly good enterprise in sci-fi’s century-plus stretch. Fortunately, the world leaves companies like Spiga Biotech staunchly in our imaginations — at least for the time being.