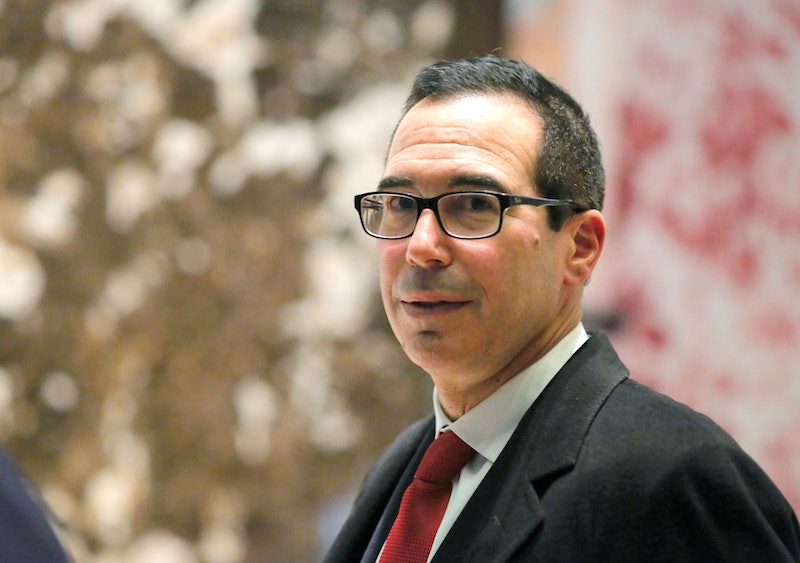 A series of announcements on Tuesday added a handful of new names to President-elect Donald Trump's growing Cabinet. Among the announcements was former Wall Street banker Steven Mnuchin, Trump's reported pick for treasury secretary. Despite his vast experience — and success — with money, Mnuchin's resume makes him a controversial pick for the financial position, particularly considering Trump's campaign promise to "drain the swamp." Given Trump's recent appointments, it would seem that the swamp won't truly be "drained" unless protests of Mnuchin's expected Treasury appointment and others are successful.

Mnuchin was formerly a partner at Goldman Sachs, the investment bank where he worked for nearly two decades. He later launched his own hedge fund and turned a failing California bank into a "foreclosure machine." In other words, Mnuchin's successful financial career has revolved around Wall Street. It seems paradoxical, then, that Mnuchin would join a campaign committed to serving Washington outsiders, as Trump promised on the campaign trail. In fact, Mnuchin has been working alongside Trump for months and months as the campaign's finance chair.

Now, it appears as if Trump is draining the swamp, only to fill it with different Washington insiders. And in particular, Mnuchin's role in thousands of foreclosures and big investment banks like Goldman Sachs has some Americans understandably worried. Here are some ways you can voice that concern:

Unhappy citizens can protest Mnuchin's appointment — and the others — by contacting their senator. (Here's a hint: Try email.) The Senate will have to formally confirm each of Trump's nominees in order for them to become official Cabinet members. Given the Republican majority in the Senate, Trump's picks are likely to earn their confirmations easily, but fostering a dialogue between you and your congressional representatives can come in handy on a wide range of issues, not just the Cabinet appointments.

Donate Where It Counts

Protestors can also support the California Reinvestment Coalition, which has publicly opposed Mnuchin's work before. The coalition uses donations to preserve low-income housing solutions in the state of California, with a special emphasis on communities on color.

Fair warning: This option is a little far-fetched, but definitely still relevant. The recount initiative launched last week by Green Party candidate Jill Stein has garnered national attention and national donations. Contribute monetarily or spread the word if you want to maintain hope for a different president-elect and, therefore, different Cabinet members.