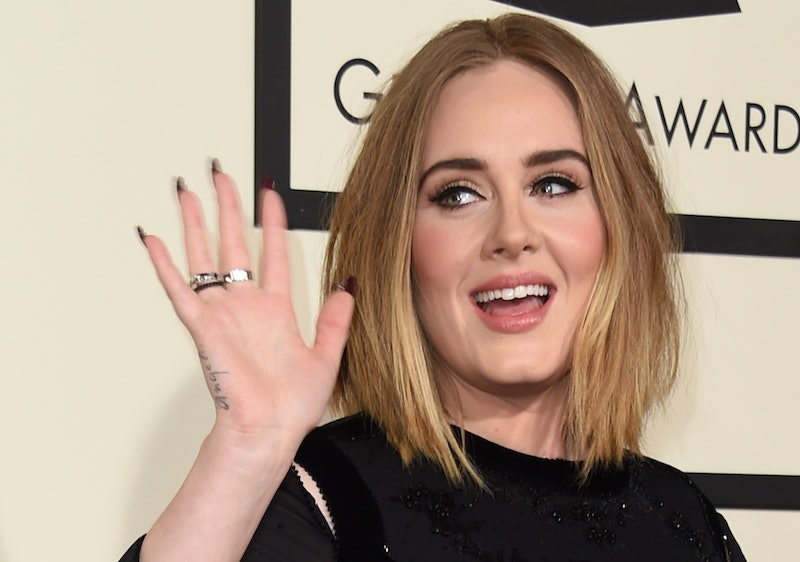 When it comes to an artist like Adele, part of my brain stops keeping track of the various awards and nominations she's received over her storied career and just replaces it with the word "infinity." She's been nominated for infinity awards, and she's won all infinity of them, just as it should be. But sometimes I'm interested in a more precise count, so how many Grammy nominations does Adele have?

The nods for the 2017 ceremony will be announced on Dec. 6, when Adele is expected to add to this number. But, as of this exact moment and up until Dec. 5, Adele is currently rocking 13 Grammy nominations, 10 of which are also wins. Which, let's face it, might as well be infinity, because 13 is a whole bunch — especially when you consider that she's raked them all in with just two albums.

It started back in 2009, when Adele's debut album 19 netted her four Grammy nominations: Best New Artist, which she won, and Record of the Year, Song of the Year, and Best Female Pop Vocal Performance for "Chasing Pavements." (In the case of those three, she only won only the category.) A year later, the album was still paying dividends, as "Hometown Glory" was up for Best Female Pop Vocal Performance, although it lost to Beyoncé's "Halo." But, hey, five nominations from her debut album? Not too shabby.

With the release of 21 in 2011, Adele was back on the scene for the 2012 Grammys, casually grabbing another six nominations: Album of the Year and Best Pop Vocal Album; Record of the Year, Song of the Year, and Best Short Form Music Video for "Rolling in the Deep"; and "Someone Like You" for Best Pop Solo Performance. In case you were wondering, she won them all — yes, all — and even scooped up another nomination and win for Best Pop Solo Performance the next year for a live version of "Set Fire to the Rain." No big deal.

And then we were, of course, in the dark ages between albums for four years. But that didn't stop our girl Adele from nabbing just one more win in 2014 for "Skyfall," in the form of the award for Best Song Written for Visual Media. So that's 13, and it brings us to the nominations for the 2017 awards, which are expected to lean heavily Adele as well. The superstar's third album 25 is predicted to get nods for Album of the Year, as well as Song of the Year and Record of the Year for "Hello."

Based on her past performances, I'd bet fans will see Adele's name cropping up in the Best Pop Vocal Album and Best Female Pop Vocal Performance categories as well, with maybe even a look at a music video category, again for "Hello." Conservatively, I'm betting on another five nominations, which would put our girl at 18 overall. And that's without even getting into how many she'll win.

Basically, Adele is a goddess. Even if she got zero nominations, which is never going to happen, she still has 13 for two albums and one single. That's simultaneously completely ridiculous and entirely deserved. Can't wait to see what comes her way on Dec. 16.

More like this
How Lady Gaga & Adele Are Closer To The EGOT All Of A Sudden
By Jake Viswanath
Beyoncé Is The First Woman To Have A No. 1 Album Since Adele Did Almost A Year Ago
By Radhika Menon
Madonna’s Reason For Directing Her Own Biopic Is So Madonna
By Maxine Harrison
Twitter Is At Odds Over Taylor Swift’s Possible ‘All Too Well’ Oscar Run
By Brad Witter
Get Even More From Bustle — Sign Up For The Newsletter