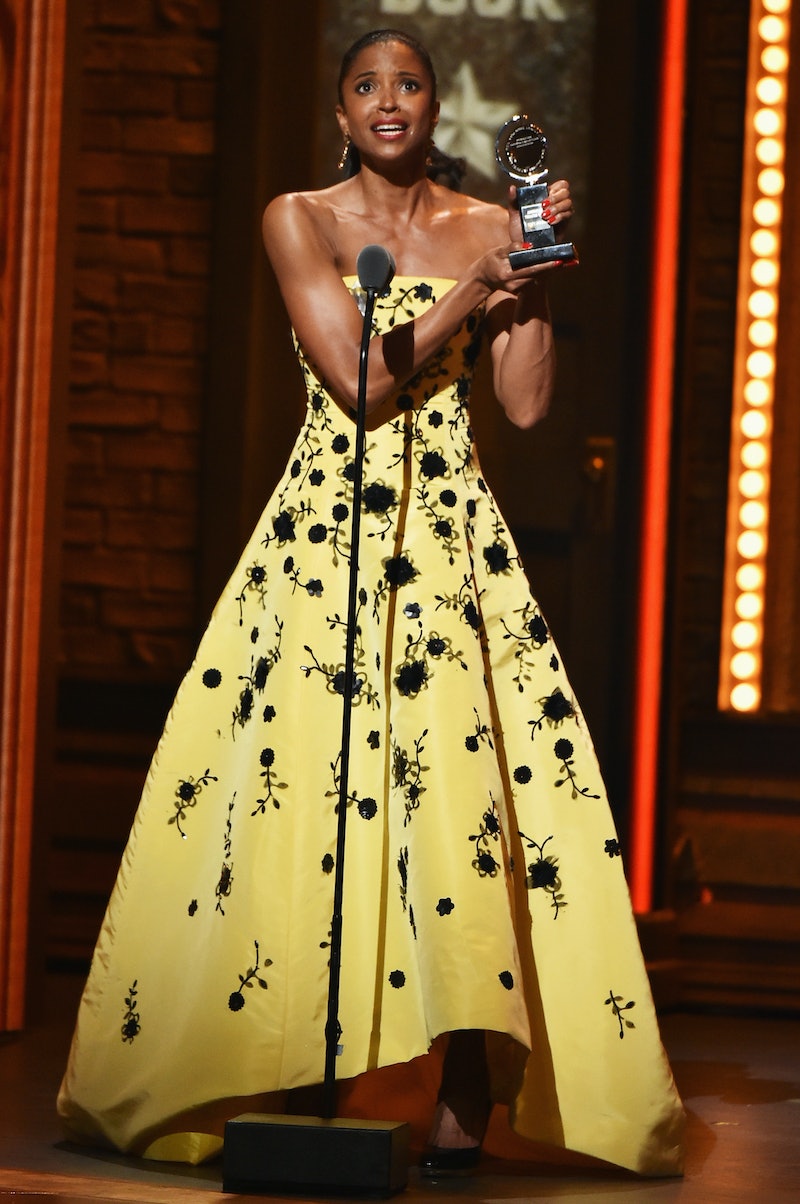 You want to hear something surprising? Hamilton's Angelica Schuyler is based on a real person. No, not... not that actual real person, Angelica Schuyler, though her story does follow her history. Obviously. I'm talking personality-wise. Lin-Manuel Miranda revealed to Entertainment Weekly that Hamilton's Angelica was based on Queen Latifah, and that makes complete and total sense in retrospect. Of course our dearest Angelica is partially based on a feminist, pop culture icon. Of course.

If you weren't already aware, Queen Latifah is actually featured on the Hamilton Mixtape's "Satisfied," which is sung by Sia and also features Miguel. That's so very meta considering Miranda's art imitated Latifah's life, and now she's becoming a real part of it. It's something that the composer acknowledges is as cool as it is trippy. Miranda explained that this is how he got his muse in the mix: "I said [to Latifah], 'You are one of my favorite MCs, full stop. Angelica exists because you were a voice in my ear growing up.' I wanted to hear her rapping again so badly!"

Here are eight reasons why it makes total sense that Miranda's iteration of Angelica Schuyler was inspired by Queen Latifah, because hindsight is 20/20.

1. She Is A WOC Who Wanted To "Include Women In The Sequel"

2. She, Too, Was Choosy About Her (Fictional) Love Interests

As one should be. A. Ham's reputation was suspect AF... at first glance.

3. She Has Always Been "The Wittiest" (In New York And Elsewhere)

Her guest appearances on The Fresh Prince of Bel Air were comedic gold.

4. She Is Strong, Self-Assured, And Encouraging

Just as Angelica was with Eliza. She never saw her sister as competition, but instead tried to prompt her to ask for the most out of her relationship with Hamilton.

5. Angelica Didn't Get Her Flow From Nowhere

I think I speak for all of us when I say thank you to Miranda for getting her to rap again. We all wanted it to happen too, good sir.

6. She Has That Unique Charisma

The kind that captivated Hamilton from the start.

7. She Embodies Angelica's "I'm Not Here For You" Notion

Despite her love for Hamilton, the eldest Schuyler sis was all about putting Eliza's wants and needs first. In a way, she, Eliza, and Peggy had that strong, matriarchal relationship that Queen Latifah references.

8. She Embraces And Champions What Hamilton's Musical Vibe Is All About

Then again, who doesn't, you know?

Looking back on it, there was never anyone else Angelica Schuyler could possibly be modeled after. Other than, like I said, the actual person.

More like this
Shakira Joked About An Early 2000s Video Of Her First Camera Phone Encounter
By Stephanie Topacio Long
Revisit 1992’s 'A League Of Their Own Cast' Photos After The New TV Series
By Grace Wehniainen
At 28, Lesley Manville Was Acting, Picketing, & Singing Kate Bush Songs
By Olivia-Anne Cleary
Twitter Is At Odds Over Taylor Swift’s Possible ‘All Too Well’ Oscar Run
By Brad Witter
Get Even More From Bustle — Sign Up For The Newsletter