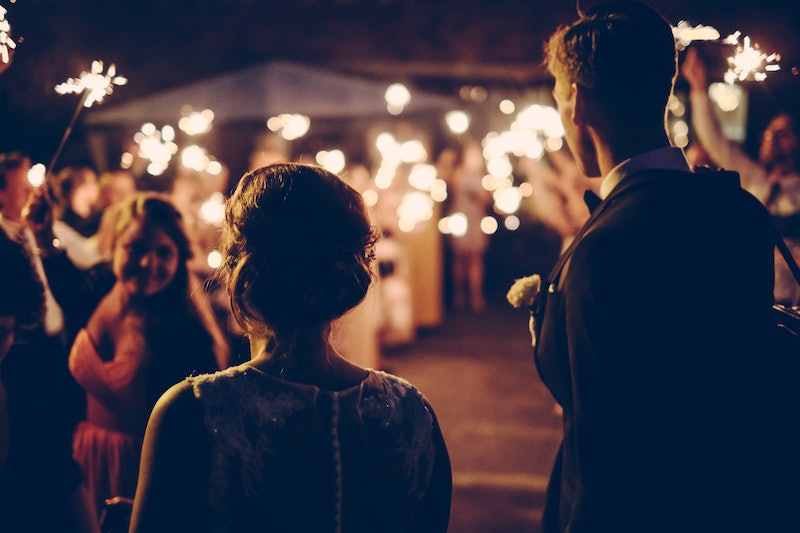 Every now and again, it’s nice to swap the sweatpants and cornerstore wine for a bit of tinsel and sparkle. But as you're zipping up your silver dress or cinching your bow tie come New Year's Eve, have you ever wondered why we pull out all the stops to ring out the old year? The history of dressing up for New Year's is an interesting one, taking us on all sorts of bends and turns before we arrive at our flashy sequins and mile-long fake eyelashes. From dressing up in cow skins to slipping on white mink before the clock refreshes, people have been glamming themselves out for the occassion for thousands of years.

The beading and hundred dollar dresses are just our own interpretation in the time we live in. So this year, when you're picking out which noise maker to slip into your clutch and debating between the sequins or three piece suits, know that sprucing yourself up to begin a fresh year isn't something new. In fact, that bedazzled number might just be your own version of a superstition. Below is the history of why we dress up for New Year's— feel connected with the legions of people that did just the same as you, a thousand years back.

Where It All Began

Before you understand the tinsel version, you have to understand the pagan version. The Scots were thought to have been one of the first groups to celebrate New Year's, with their variety being called "Hogmanay." And just as you would lay out a beaded number on your bed for a big celebration, they changed attire for the event by putting on hides of cattle. "In early times, people dressed in cattle hides and ran around with torches or lit bonfires, with fire symbolically purifying the village from evil. The wearing of these hides perhaps is the precursor for wearing something different at New Year. It might represent a form of mask, or just symbolize the topsy-turvy nature of New Year, as a time of new beginnings and revelry," Dr Jennifer Laing, co-author of Rituals and Traditional Events in the Modern World, tells Bustle in an email interview.

While the Scots were decked out with hides, the Romans had something akin to a black tie banquet for their Eve. When St. Boniface, a missionary from England, visited Rome in 742, he was appalled to see the level of revelry that took place. People were dancing in the streets, tables were heavy with food and drink, people were drunkenly breaking out into song, and women — here's the big one — were wearing amulets around their necks which they offered to sell to the highest bidder. "Women of the day would wear amulets associated with various gods to ward off evil, and at New Year they would offer them for sale along with other charms," Dr. Laing confirms. While you might not be trying to pawn your statement necklace for a glass of champagne at your party, the idea of coming ready with jewelry was in play well before.

In other cultures — like in ancient Babylon — the time between the old and new year was seen as a struggle between Chaos and Order. While the two battled it out, rules and order were reversed, and people would dress up in costumes to mark that inside-out stretch until control was restored with the stroke of midnight. While we might not dress up in masks or outlandish disguises, we do dress up outside the realm of our usual outfits. "People often wear something that is luxurious, colorful, sparkling or expensive, which could also be seen as an example of a rite of reversal — doing something that is different from the everyday," Dr. Laing points out. Not many people go buy their groceries in red carpet gowns, giving us a chance to live a couple of hours in a chaotic reality full of noise makers and fireworks that's outside of our own.

Fast forward a couple of thousands of years, and more recent holiday superstitions might clear up why we feel the need to countdown to midnight in our best and sparkliest.

For many, New Year's was seen as a fresh beginning. Because of that, many people liked to start as they meant to go on. "Many customs, traditions and superstitions are associated with a common belief that what you do on New Year's Eve or New Year's Day will set the tone or pattern for the year ahead," Louise Miller, author of New Year's Customs, Traditions & Superstitions From Around The World, shares in her book.

For example, according to British folklore, you couldn't so much as sweep dirt out of your house on Jan. 1 or else you'd be in danger of brushing your good luck away. You could only bring new things in to guarantee abundance in the coming year. And what was more new than a dress with a price tag?

You can suppose that by wearing your best attire, you were setting a charm of sorts to attract the prosperity and success you wanted for yourself during the new year. It was like setting an intention. "Buying and wearing new clothes at New Year symbolizes the idea of 'out with the old and in with the new.' The current fashion for wearing a tiara at New Year, sometimes emblazoned with the date, even if it is only made of plastic, is an example. There is also an idea that wearing something new brings good luck — starting the year as you mean to go on, with abundance," Dr. Laing explains.

The 1800s Brought On Big Parties

Prior to the late 1800s, New Year's Eve was more of a family affair, where people would go to sermons and reflect back on the past year. But right as we inched towards the Gilded Age, parties full of noise makers and sparklers took over those quiet reflections of renewals.

With more and more people moving to big cities, people wanted to ditch pew seats for parties. And party they did. In an article in the Washington Post from Jan 1, 1916, the paper reported, "New Yorkers abandoned themselves tonight to revelry and racket. 'The gayest New Year's eve on record,' was the verdict of those who know intimately the history of Broadway and other streets where the white lights blaze. Half an hour before the chimes of old Trinity officially announced the advent of 1916 the clang of church bells, the shriek of whistles on factories, ferryboats and ships of every kind and the din of innumerable tin horns heralded the approach of midnight. As the hour struck the clamor grew."

But what actually triggered this wild shift towards clamor and falling asleep underneath tables? According to Dr. Alexis McCrossen, professor of history at Southern Methodist University and author of Time's Touchstone: The New Year in American Life, we can thank both electricity and clocks. "As cities became electrified, nightlife became possible due to extensive street lighting, the lighting of various entertainment venues, and electric streetcars and subways that allowed people to get around cities effectively," Dr. McCrossen explains in an interview with Bustle. Not only could you stumble back home in a wash of light bulbs, but you now had an exciting reason to stay up so late: The countdown.

"Finally Americans began to follow clock time closely: They carried pocket watches, filled their houses with clocks, and adorned their public buildings with ever larger clocks and louder bells. So the countdown to midnight — to the exact moment of New Year’s arrival — became a very exciting moment in which a clock-obsessed public could enact their new orientation toward exact and precise time," she points out. Keeping that anticipation in mind, a new party culture was formed.

And as more and more restaurants threw lavish banquets and clubs put on shows heavy with cocktails and dancing, New Year's now wasn't just a special occasion, but the biggest party of the year — which was something that people's outfits reflected. "As New Year’s Eve became more and more of a spectacle, women carefully selected their outfits so as to draw attention to themselves," Dr. McCrossen explains

"Many New Year’s Eve parties were sponsored by clubs, restaurants and hotels. They involved multi-course meals, champagne, and dancing to music provided by an orchestra. As midnight approach more and more noise was made, and at the stroke of midnight kisses were exchanged and toasts made," she shares. And the event was made all the more special with the whole room dressed up in their finest.

But if you didn't want to go to a banquet (or couldn't afford a ticket), there were still plenty of shindigs hosted at home. From society royalty to apartment owners in modest burroughs, these parties required everyone to come in their best attire. "Other people began to hold parties at home, often substituting the radio for orchestras. Radio stations would broadcast from venues like NYC’s 'Rainbow Room' and had New Year’s Eve 'dance parties,'" Dr. McCrossen confirms.

In the Washington Post on Jan 3, 1909, Page Six described the outfits at a much-talked-about New Year's Eve party at one of the socialite's homes. "A New Year's Eve party was held by Mrs. J. Ellen Foster, Miss Pierce, and Miss Hellen Varick Boswell of New York. Mrs. Foster's gown was of black thread lace over cream satin and chiffon, with lots of ornaments. Miss Pierce was in a Paris gown of rose and bronze chiffon silk, with appliques of indescents. Miss Boswell wore an empire gown of black net chenille, dotted with touches of gold cloth."

And from there, the glitz and glamour only escalated. It wouldn't do to just put on your usual Friday night dress; people had to pull out all the stops. In a Jan 3, 1923 article in the New York Times, the paper reported a jewelry theft from a party goer making her way back home after the night's festivities. And the amount of glitter that was stolen tells you just how people would dress themselves up for the occasion. "Mrs. Irene Schoellkopf, wife of C.P. Hugo Schoellkopf, a Buffalo manufacturer, was held up and robbed of jewelry valued at $500,000 early Monday morning after a New Year's Eve party in an apartment at 64 West Fifty-second Street, between Fifth and Sixth Avenues."

From cow hides to half a million dollars worth of sparkle, we've always had the need to glam ourselves up for the ringing in of the New Year. May this year's outfit make that long history proud.

More like this
Rita Ora’s Sheer Dress & Mermaid-Inspired Prosthetics Stun At British Fashion Awards
By Sophie McEvoy
26 Christmas Outfit Ideas That Will Sleigh The Holiday Season
By Allie Fasanella
Cyber Monday Deals 2022: The Best Fashion Sales To Shop
By Dominique Norman
The Best Black Friday 2022 Fashion Deals To Shop This Year
By Dominique Norman
Get Even More From Bustle — Sign Up For The Newsletter