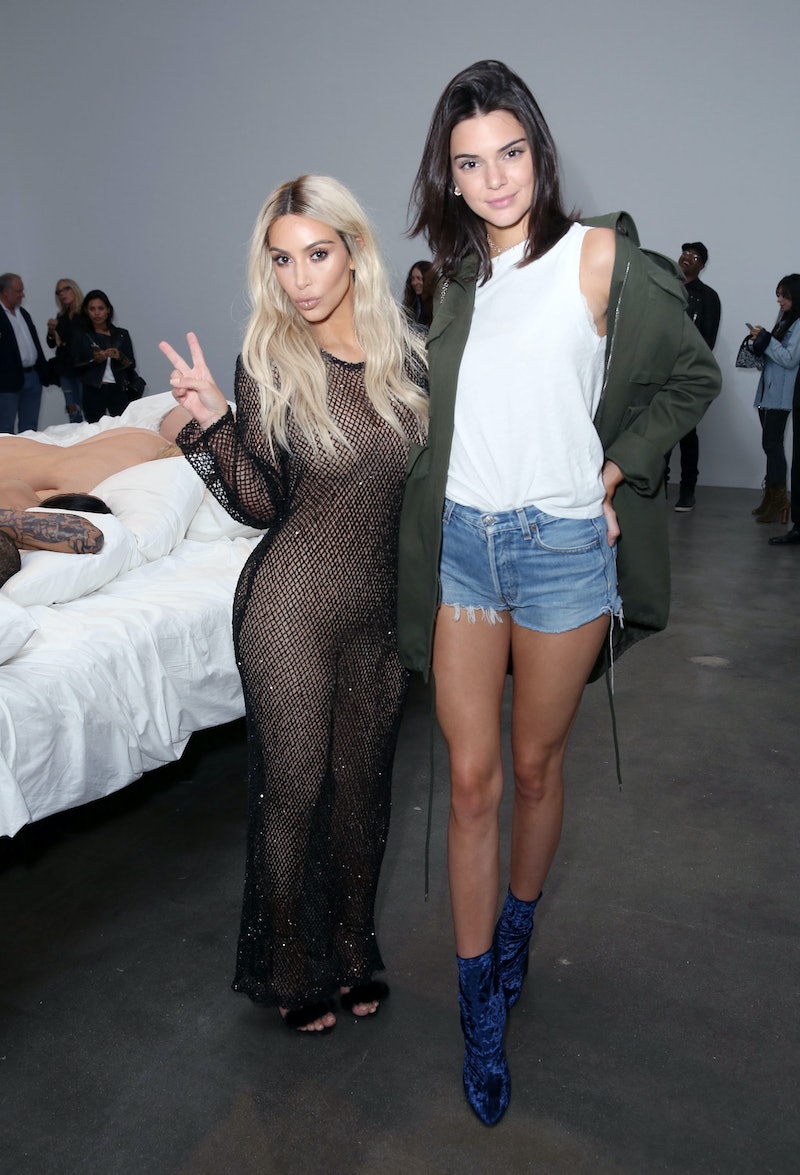 If you've been wondering how Kim Kardashian is faring after Kanye West was hospitalized for exhaustion, Kendall Jenner says Kim Kardashian is doing "good," despite all of the difficulties she's experienced in only two months. While chatting with E! News Wednesday backstage at the Victoria's Secret Fashion Show in Paris, France, Jenner said about her big sister, "She's good. She's good." The 21-year-old model's update is brief, but it's a positive one and it's also good to know that Kardashian seems to be well.

On Nov. 21, West entered the hospital after canceling the remainder of his Saint Pablo tour. He continues to be hospitalized. At the time of his hospitalization, Bustle reached out to West's rep for comment, but did not receive an immediate response. Although, on the same day news broke of his hospitalization, West's rep anonymously told The New York Times that the rapper's doctor made the call to police alerting them of West's condition and that he was taken to the UCLA Medical Center for evaluation willingly.

Not much is known about West's current condition or when he will be released, but Kris Jenner did comment on her son-in-law's status to Extra on Nov. 21 and said, "He's exhausted. He's just really tired. He's had a grueling tour and it's been a grind, so he just needs to rest."

As for Kardashian, she certainly has had two very hard months, starting in October with the Keeping Up With the Kardashians star being robbed at gunpoint in Paris. The 35-year-old has even been avoiding the spotlight and rightfully so. At this time, she wants to focus on herself and her family. Now, with West in the hospital, her husband and their two kids are probably even more important to the reality star.

To say Kardashian's family has been put through the wringer is an understatement, so to hear Jenner say that her sister is doing "good" is a great thing.

More like this
Pete Davidson Runs To Shower With Kim K In 'The Kardashians' Season 2 Trailer
By Jake Viswanath
Kim Kardashian Pays Homage To Kanye West’s Fave Film In New Swimwear Pics
By Bustle Editors and Maxine Harrison
Kanye West Has The Most Kanye Reaction To Kim Kardashian & Pete Davidson's Split
By Jake Viswanath
Are John Legend & Kanye West Still Friends? The Singer’s Latest Update Is Candid
By Brad Witter
Get Even More From Bustle — Sign Up For The Newsletter