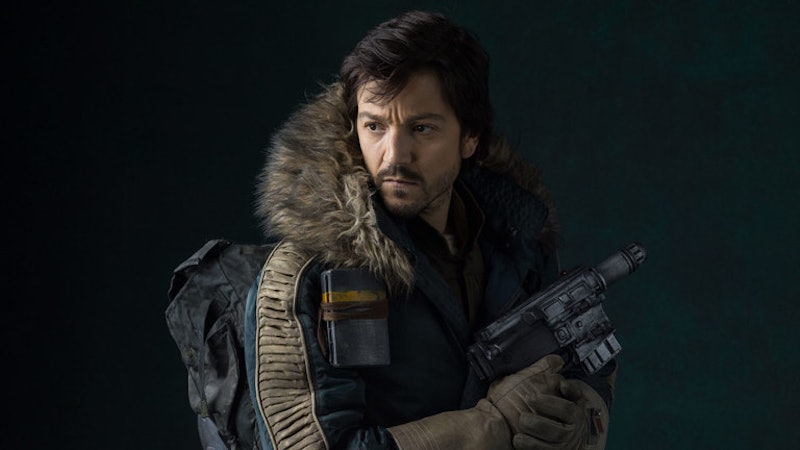 When the credits rolled after The Force Awakens, it felt like an interminable wait stood between me and the next Star Wars movie. But 2016 has flown by in a flash (a mostly terrible flash, but a flash nonetheless). And now there are mere weeks to go before the saga continues in a new and separate installment. Rogue One: A Star Wars Story hits theaters on Dec. 16 and will finally give proper shrift to the unsung rebel heroes who stole the plans for the Death Star that eventually made their way to Tatooine and Old Ben Kenobi. Luke Skywalker is still an unassuming farm boy at this point. Poe Dameron hasn't been born yet. These movie is populated almost entirely with characters new to the Star Wars cinematic universe. Wondering who you'll run into at the theater come opening day? Consider this rundown of the new Star Wars characters in Rogue One a necessary mission briefing.

One very large existing Star Wars presence will be appearing in Rogue One, that's for sure. A new TV promo for the film is dominated by the breathy sounds of a certain Darth Vader. A young Mon Mothma (Genevieve O'Reilly) is calling shots in the Rebellion, and Leia's father Bail Organa (Jimmy Smits) will have some screen time as well. But that about does it for familiar characters. Meet a few of the action figures who'll be joining your collection soon.

"It's a rebellion isn't it?" Felicity Jones's troublemaker character says in the first Rogue One teaser. "I rebel." With her record, Jyn seems an unlikely candidate to lead such an important mission. But the Rebel Alliance chooses her for a reason.

Diego Luna is Cassian Andor, a intelligence operative for the Rebellion and the professional soldier to Jyn's strongwilled amateur.

As the head of the Empire's Advanced Weapons Research, Ordon Krennic is the grandaddy of the Death Star. Ben Mendelsohn's countenance is cold and remorseless in the trailers, so I'd bet this officer won't part with his precious plans easily.

Okay, technically Forest Whitaker isn't playing a completely unexplored character. Gerrera can also be seen in The Clone Wars animated film. As such, he's seen a lot of combat; far more than his younger Rebel comrades.

Fresh from his magical Doctor Strange outing, Mads Mikkelsen is Galen Erso. Galen is a scientist who's been captured and forced to help complete the Death Star. Since he's Jyn's father as well, her assignment to the mission seems less random.

Riz Ahmed plays Bodhi, a pilot who defected from the Empire to fight for the Alliance. “A character like Bodhi is not born into the life of a soldier,” Ahmed told Entertainment Weekly. He was really just doing his job, but the Rebellion might give the pilot a larger purpose.

A Star Wars movie without a sarcastic droid is like Toshi Station without any power converters. Alan Tudyk voices and performs the motion capture work for K-2SO (Kaytoo, for short), a former Imperial droid whose memory is wiped by Cassian so he can assist the Alliance. "I approached it as if he were freed," Tudyk told StarWars.com.

He's not a Jedi, but the spiritually-attuned warrior played by Donnie Yen is a strong believer in the force.

If there's a John McClane in Rogue One, Baze Malbus is it. Jiang Wen portrays the assassin, enemy of the Empire, and unlikely best friend of Chirrut.

There isn't any information available about a character called Senator Jebel, except that he's played by Jonathan Aris of Sherlock fame.

That's Alistair Petrie as General Draven in the Rogue One teaser. He and Mon Mothma are recruiting Jyn Erso for their mission, though the General seems to be preoccupied with her unpredictability.

Fighting alongside the Rebel humans is Bistan, a representative of an alien race new to the series. The lakaru gunner was dubbed "Space Monkey" by the internet, when they didn't have a name to put to a furry face.

Another Rebel, Pao comes from the Drabata, which are an amphibian-like people

This Gigoran has no horse in this race except the one that'll pay the most for his arms. And in my opinion, the mercenary bears more than a passing resemblance to Immortan Joe from Mad Max: Fury Road.

Edrio needs his two tubes to stay alive. That's because the Imperial Empire forced him and his people from their home planet and into a less inhabitable place. He's an ally of Saw for this reason.

The Star Wars universe just keeps growing. Rogue One proves that it takes an army to even take the first step to bring down a regime.