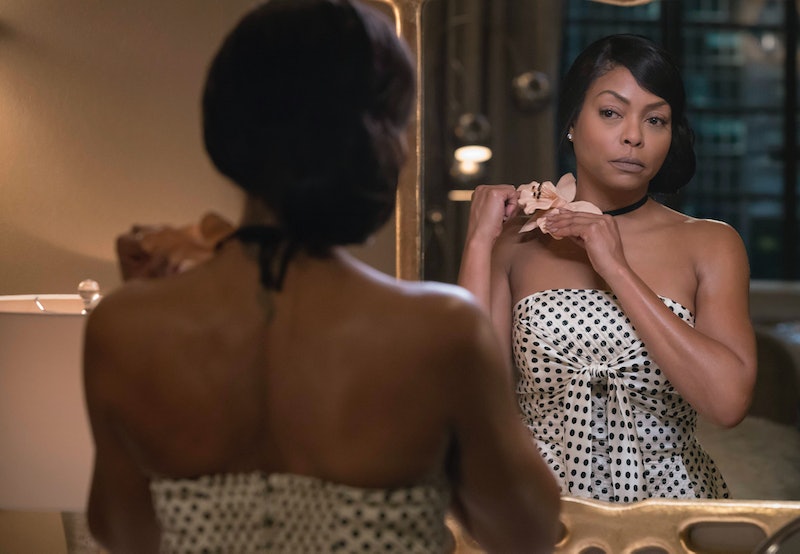 Suffice it to say that Cookie Lyon has not has the easiest of lives. She grew up poor, met Lucious, went for a ride with him, and then spent 17 years in prison because she took the fall for his crimes. She’s sort of back on top on Empire, with a label and a new, hot beau (Taye Diggs' Angelo DuBois), but we just learned a lot about Cookie’s backstory and why she’s so (inexplicably) loyal to Lucious. A lot of Cookie’s Empire issues have to do with her father.

Jamal has been working on a ton of new music since his shooting, and one of them is this sort of visual arts experience with old home videos of Cookie and her sisters that he got from his Aunt Carol. When Cookie sees it, she loves it… until images of her father pop up on the screen. All these bad memories flow back to Cookie, and she runs out of the room, of course, without explaining.

When Jamal asks Carol, she tells him that their father threw Cookie out of the house because he found Lucious’ drug money and a gun under her mattress. Though Cookie was only 16, her father told her that he had two other girls under his roof, and he couldn’t have this drug stuff in his house. He kicked Cookie out, and Cookie gave up her whole family for Lucious. When her father died of a heart attack soon after, Cookie never forgave herself, and neither did her sisters.

Cookie’s loyalty to Lucious makes so much more sense to me now. She’s treated him above and beyond anything, because, for a time, he was the only family she had. She gave up everything to be with him, and her father may have had a heart attack because of all the stress she caused (that’s what her sister implied, anyway). Later, when Jamal played a song talking about this experience and all of his mother’s strength, Cookie and Lucious exchanged all of these teary looks that made me say, “Oh, damn, don’t let this happen again.”

I get that Lucious and Cookie have a past and three kids together, but, for the love of Pete, can she please stay with Angelo? This man is good for her, and Cookie even won the respect of his hoity-toity mother. Cookie is a force of nature, and, now that viewers can understand her even better, it’s so clear that she needs to leave Lucious behind for good.

More like this
'The Simpsons' Will *Finally* Address How They “Predict The Future”
By Sam Ramsden
The Bestselling Novel 'The Doll Factory' Will Be Adapted Into Thrilling TV Series
By Catharina Cheung
The 'PLL: Original Sin' Creators Say A’s Identity Will Be “Very Clear” By The Season Finale
By Alyssa Lapid
'The Sandman’s Ending Is A Departure From Neil Gaiman’s Comic Book Series
By Kadin Burnett
Get Even More From Bustle — Sign Up For The Newsletter