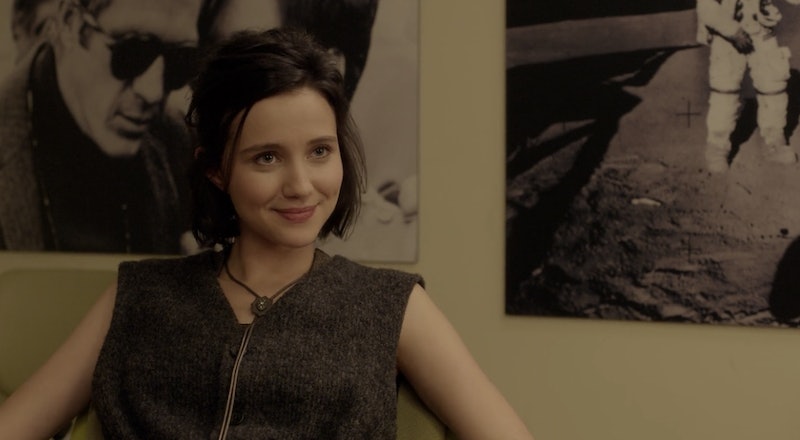 When the Gilmore Girls revival begins, Rory is doing exactly what many of us expected — working as a freelance journalist. At first, it appears that she's killing it at her career. She recently published a well-received piece in The New Yorker (which Luke adorably places on the back of his menus), at least one of her three cell phones buzzes every five minutes, and she has the funds to fly back and forth between Connecticut and London at a moment's notice. But, as we quickly learn, Rory's career isn't exactly thriving and the SandeeSays scene in the Gilmore Girls revival is one of the best — because it's both pivotal to Rory's story arc and highly amusing, largely due to Julia Goldani Telles' unparalleled ability to play a sassy, quick-witted character.

Like many fans, I grew up with Rory and I always looked up to her as a great feminist role model — especially because bookish, academically-focused teen characters were few and far between in the 2000s. Of course, she's never been perfect and one of her flaws in the original series was blindness to her own privilege and a sense of entitlement that was a little frustrating. However, these qualities were totally understandable and forgiveable for a young woman in her situation — she lived in a bubble where her entire family and town sang her praises on a daily basis.

But, after 10 years in the "real world," I was disappointed to see her behave as though she was the most coveted journalist in the print world and act as though lesser-known outlets were beneath her. But, the SandeeSays scene changed that and ultimately helped Rory realize that she was destined to use her writing skills for something other than journalism.

The CEO of SandeeSays, a startup online outlet, has reached out to Rory numerous times and expressed interest in hiring her. Lorelai suggests she check it out — after all, Rory hasn't had steady income in quite some time and she expresses that she feels like a failure because she can't land a job. We've all been there, right? (Please tell me I'm not the only one.) But, in a seriously out of character move, she shows up to SandeeSays totally unprepared (as in, she hasn't even taken a few hours to thoroughly read the site's content). As it turns out, Rory didn't think this was an interview and she expected that Sandee would hand her the job solely because she wrote an awesome New Yorker piece. Important lesson to everyone — regardless of how much a company pursues you, arrive prepared.

Look, Rory's talented — but I have to admit that it was somewhat satisfying to watch Sandee tell her exactly what she needed to hear at the time. The field of journalism is ever-evolving, and that means writers need to be open-minded about new outlets rather than dismiss them simply because they don't have the name recognition of The New York Times or The Washington Post.

Plus, a writing career means that you have to prove yourself as a "strong contender" repeatedly — one amazing story for a prestigious outlet is a huge accomplishment, but it can't be the only thing on your resume. For all the aspiring writers out there who look up to Rory, this is an important lesson. And, it was pretty hilarious to see Rory finally meet her match when it comes to quick wit, intelligence, and ambition. (Although, I think Sandee won this particular sparring match when the last words Rory could think of were, "Get Shorty!")

But, most importantly, the SandeeSays scene was a turning point for Rory because it finally made her realize that it was time to reassess her career — and what better place to unwind and reflect than Stars Hollow? Although she repeatedly asserted "I'm not back," her hometown was the perfect place to take a step back and figure out how to best use her writing skills — something that can be hard to do when you're living in a high-pressure city like New York. Rory stopped acting like outlets were "beneath" her and took on an unpaid gig at The Stars Hollow Gazette just so she could continue to hone her editing skills, proving that she's still the passionate and determined character we know and love.

And, ultimately, Rory's time in Stars Hollow and a heart-to-heart with Jess brought on the realization that journalism wasn't her true calling, which is a totally realistic plotline. Plenty of us (*raises my hand*) have landed the jobs that we dreamed of during high school and college, only to realize that they weren't the right fit — and it's so important to acknowledge that reality and switch gears.

When Rory begins writing the story of she and Lorelai, it comes to her naturally and excites her in a way that none of her previous work did. And this is a great message — just because one career path isn't what we hoped doesn't mean we should abandon our passion altogether. Some writers are destined to be amazing journalists, others are better suited to writing a book, and an especially talented few excel at both. Rory didn't give up on her dreams — she simply readjusted her career path in order to use her writing skills in a way that was perfect for her.

I doubt Rory would see it this way, but I think she owes Sandee a thank you note for giving her the wake-up call she needed.

More like this
Netflix Reveals First Look At Wednesday In The 'Addams Family' Spinoff Series
By Bustle Editors
Does The 'Echoes' Ending Mean There Will Be A Season 2?
By Kadin Burnett
Who Plays Trent In 'Never Have I Ever'? Benjamin Norris Calls His Character A “Himbo Stoner”
By Grace Wehniainen and Radhika Menon
What's New On Netflix: A Third '365 Days' Movie & Lili Reinhart’s New Film
By Arya Roshanian
Get Even More From Bustle — Sign Up For The Newsletter