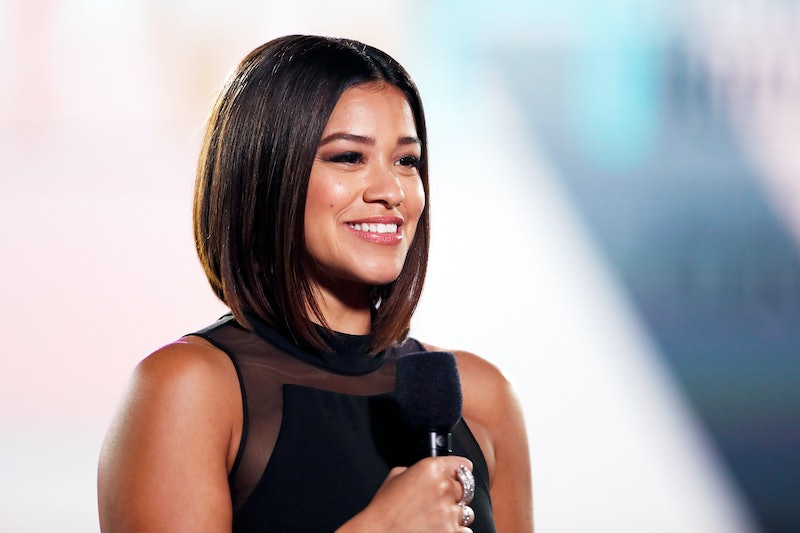 Thanks to her title role on The CW's acclaimed dramedy Jane the Virgin, Gina Rodriguez is no stranger to awards shows. In just three years, the actor has earned a Golden Globe win and several Critics Choice noms, not to mention a top spot on many critics' wish lists for the 2017 Emmys. Yet the most recent ceremony Rodriguez attended had a different feel than most — due to the star herself being its host and executive producer. The 1st Annual Young Women's Honors Gala, which took place in mid-November and will air on Dec. 19 on The CW, celebrated millennial women doing extraordinary things, and it's all the brainchild of Rodriguez, whose own success in Hollywood paved the way for her decision to honor her peers.

"I thought this would be a really great opportunity to use the platform that I’ve been blessed with by Jane the Virgin and the platform of so many other amazing women that helped me in this process to show young girls that not only are you capable of what you set your mind to, but here are amazing women that are doing it, that have done it, and now you’re not alone," Rodriguez tells me, speaking via phone the week after the show. "Now there are paths you can look at and there are journeys that you can follow, and you can see yourself in the light that you’ve never seen before."

Although she's a Hollywood darling now thanks to Jane and films like Deepwater Horizon, Rodriguez spent years in Hollywood trying to find work, taking on bit roles in small films and guest appearances in a handful of TV shows. She vividly remembers feeling confused or dejected when it came to her career, and that memory is what urged her to start the Gala. "I’m 32 years old, someone that’s going after my dreams and having a very clear vision of what I want to do in my life, but at the age of 15, I was very lost and very much in need of role models and anyone to grab onto that had done it before me, anyone to teach me the way, to make it not as daunting, not as terrifying," Rodriguez says. "So I thought, this is what we have to do for younger women."

Each year, according to its mission statement, the gala plans to honor 10 young women doing impressive work in various fields, from coding to sports to education. This year, honorees included Olympian Simone Biles and literacy advocate Fereshteh Forough; presenters and audience members included Laverne Cox, Katie Holmes, and, in a video message, Michelle Obama. "I think there’s nothing greater than to make, glorify, and uplift women doing work in fields that aren’t often spoken about in social media or pop culture," Rodriguez explains of her choices. "The honorees have been fighting the good fight their whole lives — they've been trying to make their dreams become reality since they were little ones."

"They’re insane women, like, legitimately," she adds with a laugh. "I was like, what am I doing with my life?"

Rodriguez isn't exactly slacking. The actor is starring on Jane the Virgin, branching out into movies, and writing a memoir fans can't wait to read. She's the first to admit that her life is crazy these days, but, she says, she wouldn't have it any other way. "Jane has been a blessing in many ways for me — not only has it given me the opportunity to create [awards] shows like this, but it’s given me something to wake up to every day and love," Rodriguez says. "I go to work and even though we shoot 14-16 hours a day, and it’s the hardest work I’ve ever done, I wouldn’t change it for the world."

If Jane Villanueva weren't a fictional character, perhaps she'd even be one of Young Women's Honors 2017 honorees. "[Jane] has extreme conviction and great values and lots of integrity and wants to walk in truth," Rodriguez says. "To play a character like this every day, it really becomes a reflection on your daily life. My patience is not nearly as great as hers is, but what’s beautiful is that I’m constantly reminded about all those things... it’s really hard to walk off set and not allow that to rub off on me."

As an actor, writer, and awards show host making it her mission to inspire other women to find success, I'd say Rodriguez's legacy is looking pretty good.

More like this
Beyoncé & Madonna’s “Break My Soul” Remix Honors A Group Of Black Icons
By Stephanie Topacio Long
22 Movies On Netflix That Are Perfect For The Whole Family
By Bustle Editors
Lizzo Responded In Tears To A Young Fan’s “About Damn Time” Dance
By Grace Wehniainen
We’ve All Had Bad Sex. Nona Willis Aronowitz Is Talking About It.
By Sophia Benoit
Get Even More From Bustle — Sign Up For The Newsletter